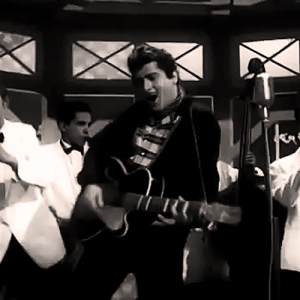 I inaugurated this series on Bombay cinema two weeks ago. Last Sunday saw the first entry proper: an annotated list of 10 essential films from the 1950s. I was supposed to post the 1960s entry this week. However, all too predictably, I have not had the time to get to it. My term starts up on Monday and I’ve been going a bit out of my head getting ready for another 10 weeks of teaching over Zoom. But do not despair! I do have a 1960s list for you. It’s just not going to be annotated this week—I hope to get around to doing that by next Sunday. Wait, there’s more! One of the things I’ll be doing in this series on an ongoing basis—beyond the lists for each decade—is highlighting music in Bombay cinema. Today: a brief consideration of musical hybridity in 1950s and early 1960s films, and in particular, the adoption of swinging jazz and rock and roll.

But first, here is the list of 1960s films that I hope to annotate by the end of next week. If that’s all you’re interested in, come back in a week.

Okay, let’s listen to/look at some rock and roll.

Let’s begin with the song that will perhaps be most familiar to American cinephiles, having been featured both in Ghost World and more recently in a Heineken commercial. This is “Jaan Pehchan Ho” from Gumnaam (1965). Mohammed Rafi sings for Shankar-Jaikishan. The song is picturized on the choreographer Herman Benjamin, who delivers a swinging lip-synced performance, but the real action here is the ecstatic dancing of Laxmi Chhaya in a guest role.

A couple of obvious things to note: 1) this is very clearly post-Beatlemania; 2) this is an early example of what comes later to be called an “item number”; a spectacular song and dance number, often featuring an actress who performs only in that number; 3) this has only the most tenuous connection to the plot of the film. Gumnaam is a thriller (an adaptation of Agatha Christie’s And Then There Were None) that turns on hidden identity and the performers here start out masked. By the 1.30’ish mark though, Laxmi Chhaya’s mask is off and by the 2 minute mark she’s dancing with two unmasked men. The point here is the ecstasy, the pure joy of the performance: there is no repression here, none of the anxiety over identity that haunts the film’s plot.

Now let’s watch another song in the same vein from seven years earlier. This is “Mera Naam Chin Chin Chu” from Howrah Bridge (1958) and for Indian audiences this is perhaps the most famous Indian rock and roll song of the period.

This song too is an item number of sorts. It features Helen (in unfortunate “Chinese” makeup) who has no role in this film outside this one performance. Howrah Bridge too is an urban thriller and this song features in its audience within the performance both the male lead, played by Ashok Kumar, who is seeking to solve the mystery of his brother’s disappearance and death, and the two villains, played K.N Singh and Madan Puri (also in unfortunate “Chinese” makeup). This sequence features some of the strategies that scholars of Bombay cinema have pointed out are deployed in scenes of public performance to “manage” their potential transgressiveness. For one, the male lead—nattilly suited and booted—never seems fully comfortable watching the performance, whereas the two villains look on approvingly. The camera keeps cutting to their reactions thus—so the argument goes—mediating the audience’s own transgressive enjoyment of the song. But what I want to emphasize here is not these unconvincing nods at repression but at the sheer joy of the song (Geeta Dutt singing for O.P. Nayyar) and the dancing which leap free of power.

If you’ve seen Howrah Bridge you may remember that the female lead is also a singer/performer, though she doesn’t perform rock and roll. Hold this thought as you watch “O Babu, O Lala” from Dilli Ka Thug another crime thriller (and comedy) released in 1958.

Some of you may recognize that the tune of the song is entirely lifted from the Andrews Sisters’ 1944 hit “Rum and Coca Cola” (itself a cover/version/appropriation of Lord Invader’s classic calypso of the same name from 1943). Ravi’s version of the tune takes the proto-rock and roll of the Andrews Sisters song and pulls it out front and center (Geeta Dutt singing again). Here too you’ll see the features alluded to above: the public performance being watched sceptically by the good man (Iftehkar’s police officer) while a villain (Madan Puri again) leers away. And yet again, I want to suggest, the exuberance of the performance—of Minoo Mumtaz as the singer and of the backup dancers—exceeds any of these half-hearted attempts at “control”. Keep in mind as well that both these songs from 1958 also provide the viewer with other surrogate viewers within the picturizations: the “regular” people in the audiences of the performances who are watching with pure pleasure.

What these songs from mid-late 50s thrillers and comedies—and not only these songs—reveal is an anxiety-free hybrid urban Indian identity, freely borrowing and recasting Western modes of dress, music and self-presentation that present a version of modernity very different from the suspicion around these things in the larger “national” films such as Shree 420, where the club and Western dress are metaphors of corruption. In Shree 420 too the sheer spectacle of “Mud Mud Ke Na Dekh”, the number in which Nadira’s Maya finally seduces Raj Kapoor’s Raj to the dark side, finally exceeds I would argue the film’s moralistic framing of identity but that reading has to be performed entirely against the grain. In films like Howrah Bridge and Dilli Ka Thug, however, that moralistic framing of identity itself is either weak or absent. Again, Madhubala’s female protagonist in Howrah Bridge (like her character in Chalti Ka Naam Gaadi) is a performer, and Nutan’s female protagonist in Dilli Ka Thug actually performs a “water ballet” in an item number, clad in a bathing suit!

Okay, what are the men up to? Here is Kishore Kumar in Aasha (1957) performing “Ina Mina Dika” (he is both singing and performing the song within the film), the other era-defining swing/rock and roll song of the period whose popularity endures. In fact, I have not seen Aasha itself and nor do I know anyone else who has; but Indians of my generation can bang out the nonsense refrain of C. Ramachandra’s composition at the drop of a hat.

Here we have a bit of a reversal. Vyjanthimala’s female lead looks on with unconvincing skepticism while Kishore Kumar and the irrepressible Minoo Mumtaz (again) rock out on stage. As with “Mera Naam Chin Chin Chu”, however, the only thing that’s important here is the joy of the performance, the complete inhabiting and indigenization of rock and roll. Please enjoy as well the panoply of Goan and Anglo-Indian background dancers who fill out these song sequences and make them come alive. For these performers, these club scenes were almost the only entryways into Bombay cinema. (Read more about these performers and the history of Indian jazz here.)

This next song may blow your mind if you haven’t come across it before. It features the “Indian Elvis Presley”, Iqbal Singh, singing in English (for Shankar-Jaikishan) in a comedy from 1960, Ek Phool Chaar Kaante.

You can find out more about Iqbal Singh, a Navy officer and war hero, in his own words in this video. I include this song for the novelty, of course, but also because it gives us a view into the swinging rock and roll scene of Bombay in the late 1950s and 1960s. It also features something very unusual: Waheeda Rehman dancing to a rock and roll song. Yes, that’s her at the 1:32 mark getting up to dance with her uncle (played by Johnny Walker). Sunil Dutt, who plays the male lead, frowns not because he’s objecting to the milieu but because he doesn’t know she’s dancing with her uncle.

But it’s not just in club scenes that we see the presence of swing and rock and roll.

This is from another Kishore Kumar-Madhubala comedy, the great Half-Ticket (1962). Kishore sings for himself again, Geeta Dutt sings for Madhubala. The music is by Salil Chowdhury. This is one of very few Kishore-Geeta duets. Geeta Dutt, by the way, is the Bombay rock and singer par excellence of the period. Asha Bhosle has some good songs in this vein too but Lata Mangeshkar is not really a player in this playful genre.

As I move to a close, I just want to note—in passing, because I don’t really have the musical vocabulary to do this justice—that it’s not just in the songs that obviously incorporate or are examples of swinging jazz or rock and roll that we see musical hybridity playing out in the 1950s. Even music directors like Naushad—not much associated with rock and roll songs—are hybridizing raga-based Indian music conventions with Western styles of orchestration and instrumentation. If you can say more about this kind of thing please write in below.

Okay, one final video. This is another club performance, this time from China Town (1962) and features the actor who more than any other embodies the libidinal energies of rock and roll in Bombay cinema of this period: Shammi Kapoor. Mohd. Rafi sings again and the music is again by Ravi. Note here how rock and roll seems to merge with folk music conventions.

I’ll have more to say about Shammi Kapoor and the transgressive version of masculinity he represents in the fuller 1960s post next week (maybe). For now, please enjoy his louche seduction here of Shakila and the audience.

If you have other favourite swing/rock and roll numbers from 1950s and 1960s Bombay cinema please link to them in the comments below. And, of course, please write in with any other thoughts or disagreements (though enthusiastic agreement is far more preferable).