Some 10 days ago I had a report on Asian Mart, a Filipino grocery in Burnsville, MN. I noted in that report that they have a deli in the rear that is currently offering takeout-only on the weekends (though I suppose this may soon change with the mask mandates changing). Today I have a review for you of some food picked up from that deli this past weekend and eaten on our deck with some of the usual crew we’ve been eating with through the pandemic. They have a limited selection of dishes on offer, and it’s not the place to go to if you’re looking for vegetarian fare, but everything we got was very tasty indeed. Herewith the details.

If you read the last report you know that Asian Mart is located in the same spot as the erstwhile Rearn Thai market, in the same strip as Blue Max Liquors at the intersection of Co. Rd 42 and 110th St. During the week you’re unlikely to find them very busy. But the weekends are a different story—and that’s on account of the food from the deli. They have a regular rotation of five or six dishes (see the menu in the slideshow below) and a special or two every weekend. These specials are posted on their Facebook page every Saturday morning.

When I was in 10 days ago I’d asked if I needed to come in at a particular time or to call ahead to be assured of being able to try everything. I’d been told then that that was not really necessary. Accordingly, I stopped in at about 2.30 in the afternoon to pick up food to reheat for dinner. And it turned out I should have either gone in much earlier or called to have things set aside for me. They were out at that point of three of the items on the regular menu: the lechon/pork belly, the bbq pork and the fried tilapia. This was a bit disappointing but it’s not like I didn’t pick up a lot of food anyway. Apparently, people come from very far away for weekend shopping and food pickup. With the dearth of Filipino restaurants and groceries in the area that makes sense.

What did I get? We were going to be 6 adults and two very carnivorous boys and so I did not order sparingly:

This is a very meat-centric operation. I don’t know how things go during normal times but right now at least they don’t seem to offer rice or any other accompaniments. But it was no hassle at all to make a big batch fo sticky rice in the rice cooker and to cook up a large batch of mustard greens in the wok to cut the pork fat. I cut up some chillies and put them into a bowl of vinegar a couple of hours before people showed up and some of the guests brought chilli-garlic sauce with them as a further condiment. All of this made for a very good meal.

For a picture of all the food launch the slideshow below. Scroll down to see how much all of this cost and for some tips on ordering if you are not or are not likely to be mistaken for Filipino. 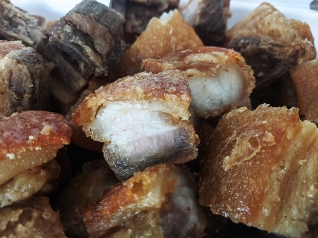 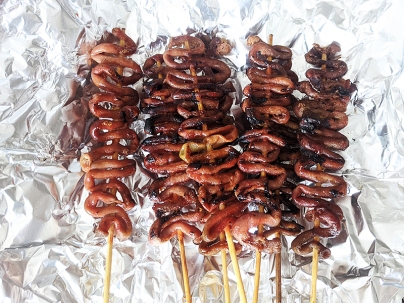 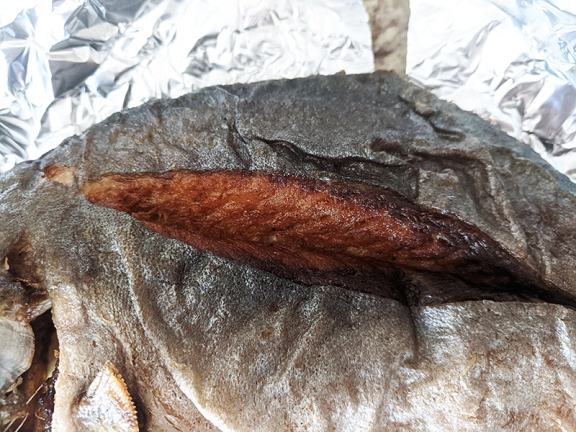 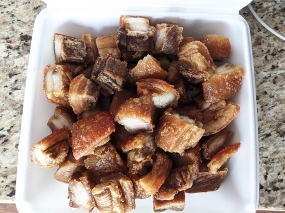 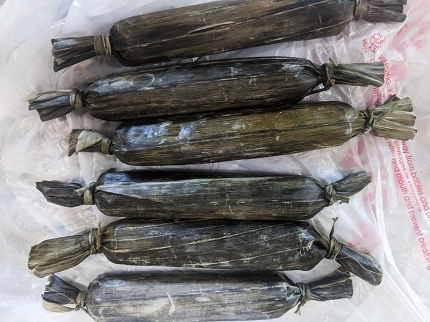 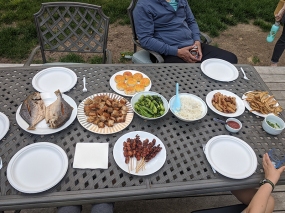 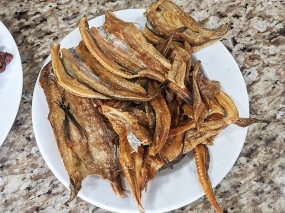 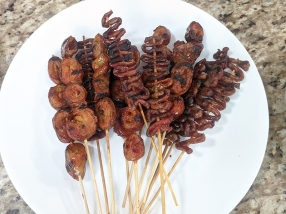 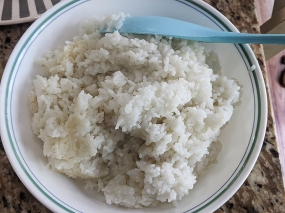 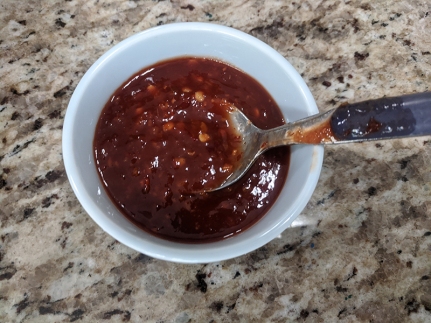 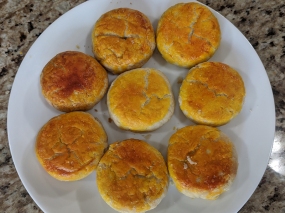 All of this (well, minus the greens and rice) came to just under $105. And while it would have been nice to try the other dishes as well, this was all very enjoyable too—if rather meaty.

So, the ordering tip: instead of asking the gent at the deli what is available you’ll be better off looking closely at the food on offer and asking him what each of them are. When I asked what was available, for example, I was told they only had the lechon kawali and the fried pompano. What are those? I asked pointing at the skewers in the deli, and he said, intestines, you won’t like them and was then first incredulous and then pleased that I got some anyway. Ditto for the jeprox which I only got because I noticed three brown paper bags full of something pungent sitting on the table in front of the deli. Now you may not actually want these particular things but who knows what else might be on offer on the day you go.

Well, my guess is we’ll be picking up bits and pieces from their weekend offerings on a regular basis going forward. The lumpia were a big hit with one of the boys and the pork gut skewers with both of them and I liked everything else as well.

Up next in pandemic takeout: more meat, this from Black Market BBQ in St. Paul.

(I’m also curious to know if any of my Twin Cities readers have tried Apoy, the new’ish Filipino bistro in Minneapolis.)

One thought on “Pandemic Takeout 58: The Deli at Asian Mart (Burnsville, MN)”