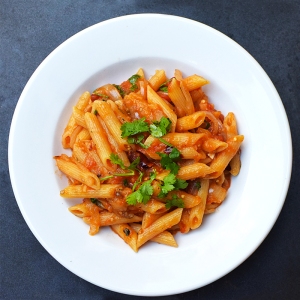 Marcella Hazan’s Essentials of Classic Italian Cooking, the compendium volume that brings her first two cookbooks together, is one of the two most stained cookbooks in my collection (Mrs. K.M Mathew’s Flavours of the Spice Coast is the other). I have been cooking from it for almost 25 years and many of her recipes have become family staples over the years. But since it’s only been a few years since I began eating baingan/eggplant, I’d never really paid much attention to her eggplant recipes. This summer, however, the eggplants in my community garden plot went off like a bomb and in desperate search of more and more ways to cook them I finally came to Marcella’s recipe for Eggplant Sauce with Tomato and Red Chilli Pepper. I made it with spaghetti and it was dynamite. I made it again and it was dynamite again. Since it needed no amendment, leave alone improvement, I obviously immediately began to think of ways to tinker with it. This led in short order to this fusiony variation that we might possibly now like even more.

Marcella’s recipe—which appears to be all but identical to that for the Sicilian classic Pasta Alla Norma, though she does not cite it—calls for eggplant to be cut into disks, fried to a crisp, set aside then cut into strips and added to a fairly regulation tomato sauce right before the pasta is tossed in it. In this version, the eggplant is instead charred over a flame or ideally charcoal, peeled and chopped to a near pulp as you would if preparing a classic baingan bharta. Indeed, the sauce itself is treated like a very tomato heavy bharta. I start by tempering crumbled dried hot chillies in oil, then adding and browning onions—which are not present at all in Marcella’s recipe—before adding the garlic. For those who follow my Indian recipes this will seem like a very familiar progression. Then a lot more tomatoes than would go into most baingan bhartas and finally the pulped roasted eggplant is added at the end as in Marcella’s recipe. And instead of cooking the sauce with parsley I add cilantro before tossing the pasta with the sauce.

The result is a tomato sauce with a rich texture and a lovely smoky flavour. It’s not bharta and it’s not Marcella’s sauce (or Pasta Alla Norma)—and it’s probably hotter than Marcella intends her sauce to be—but it’s very, very good and somewhere between Italy and India. Give it a go and tell me what you think. 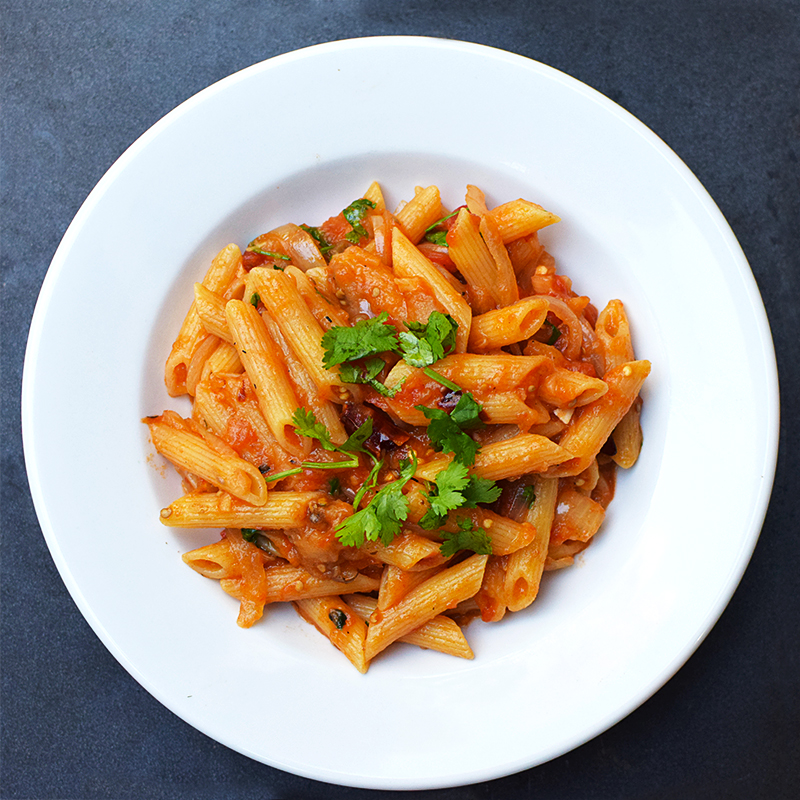 [The cookbook links in this post are affiliate links.]