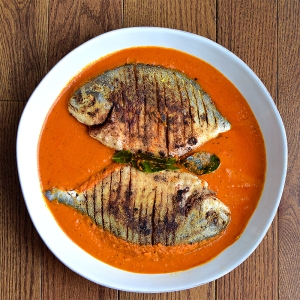 If you follow my cooking posts you’ve probably cottoned on to the fact that I really like pompano. I’ve already posted a number of recipes featuring it that are all generally variations on a central delicious theme. The recipe I have for you today can also be placed in that framework but it has some elements that take it more directly into the borderlands between South Indian and Thai flavours. This came about because when we came back from Los Angeles at the start of the month I had pompano in the freezer that I had a hankering to eat but I did not have curry leaves or green chillies—both of which are important in the South Indian’ish preparations I usually make with it. I decided instead to just marinate and fry the pompano whole and serve it that way along with dal and rice. But then once I’d marinated the fish and coated it with sooji/rava/cream of wheat to crisp it up I began to think of the lovely whole, fried fish we’ve had in Thai restaurants, served on rich curries or sauces; and as I did have lime leaves in the freezer I was soon on my way to improvizing a hybrid dish that came out rather well. I’m calling it Indo-Thai fish curry.

You can make it with whole rava-fried pompano a la the recipe below, or more simply as described in the notes. For those who are interested in the whole fried fish version but may be nervous about going about it, I’ve also included below a gallery showing the steps for marinating and frying the fish. And, as I say, the notes contain directions for making it without the dramatic frying of the whole fish (though it does also make for a dramatic presentation). I’ve made it this way too with salmon after our return. I can tell you it will be very tasty either way*. Give it a go and let me know what you think. 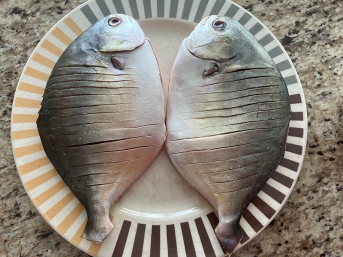 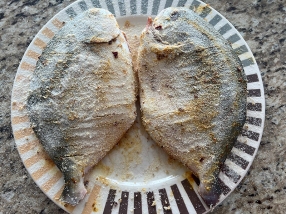 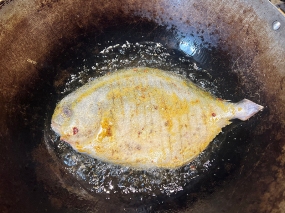 *Though full disclosure: when I put this on the table the younger child pronounced, and I quote, “I don’t want it, it stinks!”. Don’t worry: he has since been removed from my will.