Okay, it’s time to start the Kauai meal reports back up before I forget about them completely. So far I’ve put up brief reports of a couple of Chinese/Thai lunches in Princeville (eaten outdoors at Lotus Garden) and a Hawaiian lunch in Lihue (taken away from Mark’s Place and eaten in a park). This report is also of a Hawaiian lunch in Lihue. We ate it the day following our Mark’s Place meal. The plan had been for us all to spend a part of the morning at the Kauai museum in Lihue, then drop my mother-in-law back at our rental to relax while the rest of us hit a beach. But thanks to some car trouble and Budget Car Rental the morning didn’t go quite according to plan. I know you’re dying to get the details on this—there’s nothing more fascinating than reading about other people’s vacation drama. Don’t worry I’m going to tell you what happened in great detail.

In short, we got locked out of our car. This was actually the second time in two days. The previous day we’d almost got stuck in the middle of nowhere after a hike when the key fob of our rental car stopped working—and it was one of those annoying cars that has no physical exterior door lock. After a lot of swearing and squeezing the fob we managed to get the car open and started and drove straight to the airport Budget location to get a new battery. That seemed to have fixed things. But the next day—with a brand new battery in the fob—the car could not be unlocked. And nobody at Budget had any ideas about how to fix things. Then they said they’d send a truck out to tow the car to the airport location and that I could get a ride on that truck and pick up a new car. We waited an hour for this truck to contact me with a pick up time but there was complete radio silence. I then looked up how to open and start a Volkswagen Passatt when the key fob fails and after a minute of Youtube research we had a functioning car. It turned out it did have an exterior lock but it’s hidden (and no one at Budget knew about it)—and once in there’s a sequence of button pushes that forces the engine to start. And so I dropped everyone else off at the museum and headed off to wrangle with Budget.

By the time I got the new car sorted the family was almost done with the museum and so I picked up lunch at Smiley’s Local Grinds, just about a mile or so from the museum and we had another outdoor lunch, this time at Kalena Park. The day improved dramatically at this point as the food was very good.

Grinds/Grindz, by the way, in case you don’t know—as I didn’t before this trip—is a Hawaiian slang term for food. My guess is that you’re most likely to see it in the names of places serving Hawaiian food but that’s just a guess. At any rate, that’s what Smiley’s Local Grinds serves. They are located in an unprepossessing strip mall, alongside some other informal restaurants. I don’t know if they normally have indoor seating but in June/July they were serving only takeout. You can call ahead and order—and this is what the locals picking up food had mostly done. As far as I could tell locals—seemingly on lunch breaks from work—were the majority of the clientele that weekday afternoon. There were a few of us tourists waiting as well and none of us had thought to order ahead. But it wasn’t a very prolonged wait and we got very freshly made food.

What did we get? One of the boys got a chicken teriyaki burger/sandwich. The other shared the adult food which included an order of Smiley’s Chicken with chilli garlic sauce; laulau (pork wrapped in taro leaves); and hamburger curry (keema by another name). The three plates came with steamed rice and mac salad (in the case of the chicken and the hamburger curry) and glass noodles, lomi lomi salmon and chicken rice (in the case of the laulau). In addition we got a side of mushrooms, a small salad and an extra order of rice. All of it was very tasty in the vein of comfort food and fueled us well for an afternoon spent mostly in the sea.

For a look at their setup and the food, launch the slideshow below. Scroll down to see how much it cost and to see what’s coming next from Kauai and elsewhere. 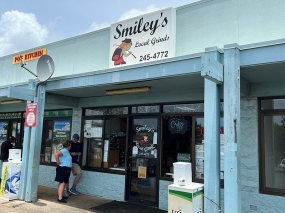 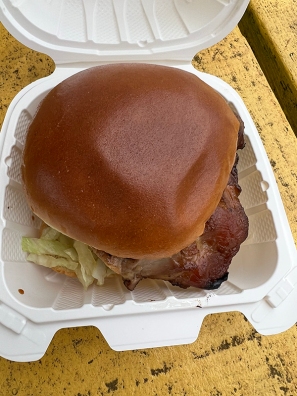 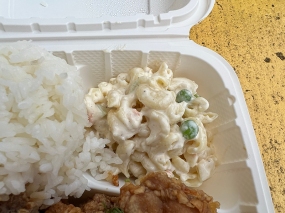 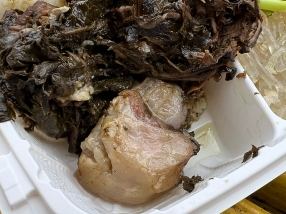 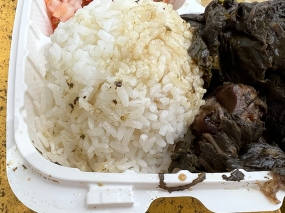 All of this came to just $61, which is a very good price for the quality and quantity. I would certainly recommend Smiley’s Local Grinds to anyone looking for good food in downtown Lihue.

I am now almost done with my Hawaii reports. I have one more restaurant meal in Kauai to report on and then I will probably do a round-up of all the poke and shave ice we ate on the Big Island and Kauai—this was really the food through line of our trip. Before that, I’ll have a report on another dinner at Alma in Minneapolis and my first Dublin report. And tomorrow I’ll have a quick walk-through of a large Asian super market in St. Paul.