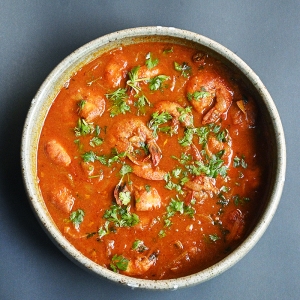 Here’s another recipe from August when I was trying my best to use up the flood of tomatoes coming in from my plot at the community garden. In this case, I also had on hand a few pounds of excellent Gulf shrimp purchased from a seafood truck that drives up from Texas to the midwest every summer. Normally, I would have made malai curry with shrimp this good but, as I said, I had a metric tonne of tomatoes to use up. And so I pulled together a relatively basic shrimp curry. Relatively, because two ingredients give the curry extra depth and bite, respectively: dessicated coconut and Sichuan peppercorn. The heat comes mostly from the black peppercorn in the spice mix, with a Kashmiri chilli [affiliate link] used more for colour. It’s a simple recipe that comes together quickly and delivers great flavour for a weeknight or weekend meal.

One thought on “Shrimp Curry with Tomatoes”