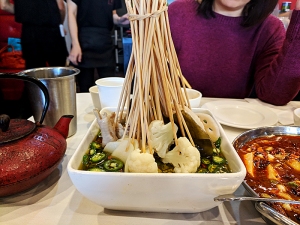 I’ve previously written up two meals at Chengdu Taste, the celebrated and absolutely essential Sichuan star of the San Gabriel Valley. Though I call it essential—and it is—it has somehow been two and a half years since our last visit. This is partly because it has been one and a half years since our last visit, and partly because on our last two trips we’ve docked instead at Szechuan Impression—essential in their own right. We were resolute, however, that we would return to Chengdu Taste on this trip. Annd we were there for lunch on Tuesday, less than a day after arrival. They are now a mini-empire—with three locations in the SGV and one in Las Vegas—but the original in Alhambra (which is where we always go) is no less busy for it. We got there just after noon and were given one of two empty tables. When we left at about 1.15 there were a lot of people waiting inside the door. On a Tuesday. For lunch. But the food tells you why: our third lunch was as good as our first (and that was just about a year after they’d opened). There’s been no resting on laurels here.  END_OF_DOCUMENT_TOKEN_TO_BE_REPLACED 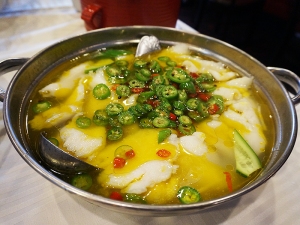 It’s been more than a month since I got back from Los Angeles but I still have a number of meal reports to go. After a string of sushi reports here now is a brief account of our return to Chengdu Taste in late July. Our lunch there was one of the highlights of our trip last summer; despite noting in the write-up of that meal that we’d be back on each trip, we unaccountably failed to go in December. Well, there was going to be no such error on this trip. Once again we escaped the long lines by going for lunch on a weekday, not too long after they opened. We still had to wait but not for very long. And this time we had our table to ourselves. While the restaurant was full throughout, it does appear that the opening of the new branches in Rosemead and Rowland Heights have eased the pressure somewhat (our meal was again at the original Alhambra location). Though I’m sure weekend lunches still draw the lines.

END_OF_DOCUMENT_TOKEN_TO_BE_REPLACED 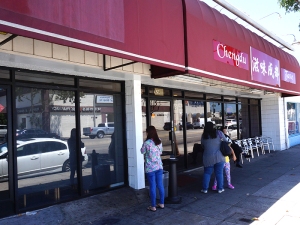 Chengdu Taste opened right before we got to Los Angeles last year and was immediately anointed the best Sichuan restaurant in the San Gabriel Valley (which is to say in the United States). We opted not to eat there last year on account of my general suspicion of hype. There were plenty of other places to eat excellent Sichuan at, we reasoned, and if it were still considered great a year later we’d eat there on our next trip. Well, the next trip is now and Chengdu Taste is still all the rage and so we decided to give it a go. END_OF_DOCUMENT_TOKEN_TO_BE_REPLACED