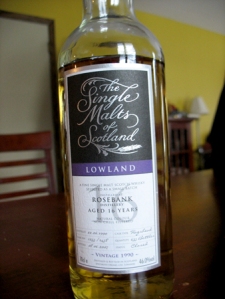 Rosebank is another lamented, closed distillery. It was located in the Lowlands region and was closed in 1993. I am not sure if Rosebank’s whisky was triple-distilled all the way to the end (as used to be traditional in the Lowlands)—some sources seem to suggest it was, others are less confident. As with most closed distilleries, Rosebank has its adherents, though they are neither as fanatic as those of your Port Ellens, Broras or even Caperdonichs and Banffs, nor as perverse as those of your Brechins or Dallas Dhus. There’s not a lot of Rosebank around in the US—mostly some bottles in Gordon & Macphail’s Connoisseur’s Choice line—but it was featured recently in Diageo’s annual cash grab, I mean, prestigious slate of annual releases, with a 21 yo released a couple of years ago. They don’t seem to have had much luck convincing a lot of people to buy it, however, as there seems to be a lot of it still around in the US. (It’s sort of funny how much money Diageo is making off distilleries it closed without a second thought in the early 80s and early 90s–sometimes I wonder that more distilleries don’t just close down to increase their prices and cachet.)

Anyway, this is my first Rosebank ever (which perhaps I should be more embarrassed to say than I am). It was bottled by Specialty Drinks (aka the Whisky Exchange) for their Single Malts of Scotland line. Somewhat unusually for this line, it is not from a single cask but a vatting of two bourbon hogsheads.

Nose: Heathery sweetness. (Frankly, I have no idea what heather smells like, but you can’t expect to hack it as a whisky reviewer if you don’t find notes of heather in at least 70% of everything you nose.) The slightest bit spirity, but not for long. A little acidity on the edges. Gets a little muskier, a little more malty. Not terribly complex but quite pleasant. With time the acidity expands and a nice fruitiness emerges: kiwi? gooseberry? lime? I think this can handle some water; let’s see if that does anything interesting: ah, a touch of water doesn’t really bring any new aromas—well, maybe a little vanilla—but it does make everything more balanced, I think. The vanilla notes come to the fore with time; there may even be some butterscotch–more biscuity, at any rate (in the British/Indian, not American sense).

Palate: Nice mouthfeel. A lot more acidic on the palate than on the nose at first: lime cordial, champagne vinegar. With time the acidity mellows and things get a little more malty, and also a little bit grassy. With water, the lime cordial gets spiked with some apple juice. The grassy note seems to expand at first but after some time the palate settles down into a pleasant, mildly fruity, mildly acidic sweetness.

Finish: Long, but not aggressive. The acidity lingers and then some wood spice shows up at the end. More bitter with water, but nothing unpleasant.

Comments: At first I thought this was going to be just okay but with time it got more interesting (and with water the nose, in particular, improved a lot). And I liked it a lot more a day later on my second pour than on my first. An aperitif whisky–though given the acidity it might even go nicely with some cheese after a meal. Not perhaps the blockbuster Rosebank that a Rosebank fan would have picked as my first Rosebank, but it does make me curious to try others. I will say that I don’t think this is a triple-distilled whisky, or at least that if it is, it seems like it could just as easily have been double-distilled; and also, that this could pass quite uncontroversially as an en-bourbon Speysider.

Leave a Reply to My Annoying Opinions Cancel reply