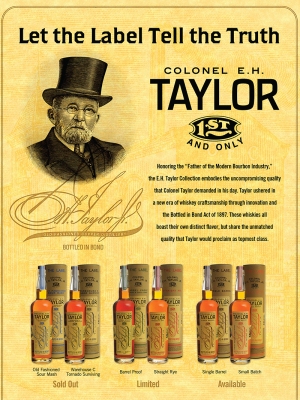 Here is my threatened follow-up post on some of the issues that came up when I was idly looking up the history of Colonel E.H. Taylor for my review of his namesake Small Batch bourbon released by Buffalo Trace. Before I get into it, let me first say what this is not and what it is.

It is not scholarship or even journalism: if I were doing either of those things I would spend months or weeks researching the subject. I would read every book on bourbon history to see to what extent and how this material has already been written about; I would investigate the archives of the distilleries and of the relevant locations (Frankfort, KY, for example); I would read historical studies of the Civil War and Reconstruction; I would interview experts like Chuck Cowdery, Mike Veach and Reid Mitenbuler. I have done none of these things because this is not scholarship or even journalism (and should not be confused with or held to the standards of those enterprises).

What this is is a blog post: it’s exploratory, it’s speculative, it’s a clearing of space in my own head which might possibly lead to more detailed exploration down the road or it might not; hopefully it will invite responses from people who can fill in all the things I would know if I’d done the research and point me to other places to look; and, even if it’s all redundant, hopefully it will spur some discussion: there are subjects which even if already known benefit from regular discussion and I think this might be one of them.

Okay, a quick recap for those who didn’t read my initial post on the subject and don’t want to click over now to do so: I noted that I found it interesting that the few accounts of E.H. Taylor Jr.’s life that I could find online, including on Buffalo Trace’s website, seemed to omit his life and activities before the end of the Civil War. This I found striking both because he was born quite a bit earlier, in 1832—i.e he was already in the prime of his life in the 1860s—and because he was apparently a purchasing agent for the Union during the war, and therefore on the right side of history.

That post was actually written a couple of months ago, and only posted on Wednesday. After it was published I idly did a Google search for “E.H. Taylor Jefferson Davis” and came up with something unexpected. (I should say first that I did that search because in the post I’d noted that Taylor was apparently related to Jefferson Davis—where I’d originally got that I don’t remember anymore: if you can corroborate or correct please do so below.) What I found was an account of a speech given in 1917 by a General Bennett H. Young about the Jefferson Davis memorial monument, which was then just under construction. The interesting part was the singling out of Col. E.H. Taylor as one of the major donors and the very ripe language used to glorify Jefferson Davis and the Confederate cause. Screenshots of the text of that speech are in the comments of Wednesday’s post, but I’ll repost them here (click on the images alongside to expand them).

This made me think that it was less surprising that Buffalo Trace didn’t mention Taylor’s activities on the Union side during the Civil War—after all, if you play that up then it’s quite an omission to leave out his activities and sympathies later in life. Plus, as a number of people pointed out to me, it’s not unlikely that some fraction of the bourbon market might in fact not look with favour on his having been on the Union side during the war—see, for example, this post by Chuck Cowdery which mentions that until 1984 the Rebel Yell brand was only available south of the Mason-Dixon line. In fact, it’s not clear what Taylor’s actual sympathies were during that period either: see this summary of the Taylor-Hay family papers held by the Filson Historical Society: you’ll see that the clients of his bank before the war included a number of slaveholders.

In private conversation (which I have permission to paraphrase), Sku pointed out that none of this is particularly surprising: he hazarded that if we looked closely into the activities of your Jack Daniels, your Elijah Craigs, your Evan Williams, your George Dickels etc. we’d likely come up with very similar stuff. As Sku noted, these were all privileged white southerners living in antebellum and recent post-Civil War South—indeed you don’t have to look very hard to learn that Elijah Craig was a slaveholder (though you won’t find that on this Heaven Hill brand ambassador’s page who otherwise replicates language from the Wikipedia page that mentions it!). In another brief private conversation (which I also have permission to paraphrase), Reid Mitenbuler said much the same. He pointed out to me that Jim Beam’s middle name, Beauregard, was for a Confederate general and that the Samuels (of Maker’s Mark) supported the Confederacy. And I’m sure many of you who’ve read up on the distilleries can add to this tally. Even if knowledge of the specific E.H. Taylor-Jefferson Davis stuff isn’t widely known, it’s certainly not shedding light on a more general aspect of bourbon history that is in any way unknown. (To be clear neither Sku nor Reid M. are in any way excusing any of these men for being men of their times.)

So, why am I going on about it then? Well, I’m fascinated by this odd dance that so many established American distilleries do with what is, to say the least, a very complicated history and I’m interested to hear what regular bourbon drinkers make of it. Almost all these distilleries have hung their hat on “Tradition” and “Heritage” (as Patrick pointed out in the comments on Wednesday’s post). This is not in and of itself anything unusual. The United States is a country where claims of established tradition/history are always going to be prized—probably because actual national history doesn’t go back very far. This is why “artisanal” hipster producers in Brooklyn who have nothing in common with Southern distillers also seek to project an invented old-timey tradition through playing dress-up. The established bourbon distillers, on the other hand, actually have a real tradition, a real history going back 150 years or more at this point and so it’s no surprise they want to make sure we know it. But in its telling they don’t distinguish this history from the stories they continue to tell of the men whose names they put on bottles. 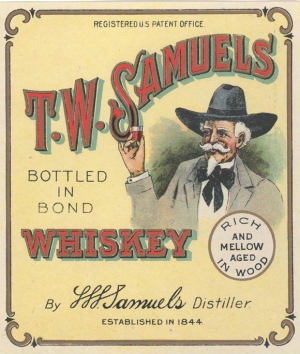 T.W. Samuels of Maker’s Mark. The distillery’s website presents a very abbreviated history of the man.

To put it another way, a Tradition of Distilling is not the same thing as a Tradition of Founding Distillers. The former can, with care, be presented somewhat neutrally: “We’re special because we’re doing something that we’ve been doing for a long time, our practices are traditionally tested and established and this is why our whisky is so good”. This is, by and large what we see in the world of Scotch. Almost all those distilleries were also established in the 19th century. And I have no doubt that if we looked closely we’d find raving imperialists under many a pagoda roof. But the Scotch industry, by and large, emphasizes its tradition not through citation of these figures but through the distilleries themselves and the story of traditional craftsmanship. Brand names of the “Founder’s Reserve” variety abound but very few whiskies are named for actual figures.

The problem with the Tradition of Founding Distillers is that it doesn’t really have to be read against the grain to reveal men who, in addition to founding distilleries, held racist ideologies and supported abhorrent causes. Now the original sins of slavery and the genocide of native Americans are of course central to most American stories—in no way do I mean to single out bourbon here. But it’s hard for me to come up with too many iconic American industries that slap the names and faces of racist founders on their products and websites and in a sense force you to commemorate them with each purchase: “We’re special because we were established by this guy and we make whisky the way he did or liked [but let’s not talk too loudly about everything else he liked and did at the same time]”.

I’m not suggesting that bourbon distilleries should abandon their past (or simply fudge it by not mentioning it at all). But to repudiate (some aspects of) the past is not to deny it. You can not only acknowledge the roots of your distillery and industry in a deeply racist milieu, you can address this on your distillery tours and on your websites. You can be a greater, more visible supporter of the causes of racial justice that remain woefully necessary. You can certainly acknowledge you were founded by someone who held racist views and/or was an apologist for the Confederacy well into his days without naming a premium line of bourbons for him. Personally, learning about E.H. Taylor’s past makes me reluctant to put a bottle named for him on my bar (though it doesn’t make me reluctant to buy Buffalo Trace products per se).

Now I’m going to await the arrival of a bunch of books that I look forward to reading carefully. It may well be the case that everything I have said here has been said before and better by them. In which case this has been a wonderful use of your and my time. You’re welcome!

Here are the books I have ordered (please note that these Amazon links are through my Associates account and so if you purchase them, or anything else, by following these links I will receive a small commission):

22 thoughts on “Col. E.H. Taylor, Bourbon and the Problem of Tradition”