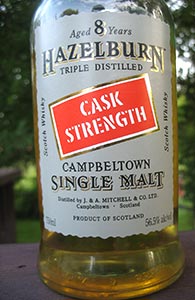 Hazelburn is the unpeated, triple distilled whisky made at the Springbank distillery in Campbeltown. There’s not that much Hazelburn out there in general release. There have been a few releases of an 8yo and a 12 yo, and more recently, the Hazelburn CV (not sure if this is ongoing or if it has been discontinued a la the Longrow CV). Other than that there have been some one-offs; for example, a recent 8yo double matured in bourbon and sauternes casks.

I’ve never been too moved to give Hazelburn a try because the prices seemed too high (especially for the 8 yo) and my preferences generally tend to run towards more robust profiles. However, when Binny’s included the Hazelburn 8 yo in a recent closeout sale I decided to give it a shot. Their site seemed to indicate that I’d be getting the second release of the 8 yo at 46% but what showed up was a cask strength bottling at 56.5%. There’s not too much information out there on this: Whiskybase indicates that it was a single bourbon cask release of 228 bottles for the US, but it doesn’t actually say this on the bottle.

As you’ll see below, I did not find it to actually be unpeated. Or rather, while the barley may not have been peated, the whisky certainly has peat aromas and flavours. In this it is not unlike some releases of Caol Ila’s “unpeated” line. The source of the peated quality, I speculate, may in this case be the bottling equipment. I have no idea if the regular 8 yo and 12 yo releases display similar qualities. Any feedback on this would be much appreciated.

Nose: Lemon–citronella, with a slightly dirty, farmy edge. Some apples too. Gets quite intensely briny with time but there’s also the occasional hint of white sugar peeking through. The lemon and the brine get less intense with time and there’s a musky, lemony sweetness as it settles down. With a lot of time there’s a savoury, briny, musky note, almost reminiscent of ham. With water the citronella note picks up again.

Palate: Sweet at first, then lemony and then sweet again. But hmmm there’s definitely some peat in here (a farmy quality rather than smoke). Did they not clean the equipment well after a Longrow run? Apart from that peat twist this is quite straightforward; straightforwardly pleasurable. Actually, wait, with time there’s a leatheriness as well. Water makes it sweeter, on the whole, and also banishes that peaty/farmy note.

Finish: Medium and tingly. Some lemon and some vague hints of wood spice. Water does most for the finish–extending it and keeping the lemon going longer.

Comments: Not a world-beater but I like it a lot. Seems more straightforward at first than it turns out to be but is, on the whole, an easy-drinking malt. I do get that note of peat on the palate at first–it doesn’t hang around–and I wonder if it is due to some residue of peated spirit in the bottling line or something like that. I guess this is triple-distilled but it doesn’t feel very different than double-distilled Speysiders of similar profiles. The briny quality on the nose and the light leatheriness on the palate indicate its shared genetic blueprint with its stablemates, Springbank and Longrow.