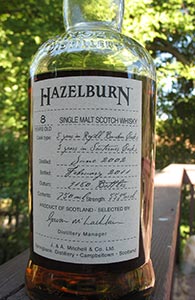 So, here is another wine cask-matured whisky, this time from Springbank’s Hazelburn line. Springbank have a slightly different approach to wine casks than most distilleries: they either mature the spirit entirely in the wine casks (see the late, lamented 11 yo from Madeira wood), or in the case of secondary maturations, house the spirit for an appreciable period of time in the wine casks. To take only some recent examples, the Longrow Burgundy wood spent 3 years in Burgundy casks after 11 years in refill bourbon; the new Springbank Calvados wood spent 6 years in Calvados casks after as many in refill bourbon; and this Hazelburn also spent 3 years in sauternes casks after 5 years in refill bourbon. This extended second maturation seems different from the briefer wine “finishes” that most distilleries do and in all the Springbank releases I’ve tried I’ve not found the wine notes to be sitting on top of the whisky; and I think in general that the spirit produced for the Springbank and Longrow lines is robust enough to keep the wine in check (which is not something I generally find to be true of Glenmorangie, for example). But will this be true of the more delicate triple-distilled and unpeated Hazelburn spirit?

Hazelburn 8, Sauternes Cask (55.9%; double matured in refill bourbon and sauternes casks; from my own bottle)

Nose: The first impression is of salt; some slightly perfumed wine notes below that but this doesn’t proclaim its wine cask origins so very loudly. There’s some dusty, aromatic wood and cinnamon and a hint of nutmeg, and then some orange and hints of cherry. After a few minutes the wine notes are more apparent but they’re quite well integrated with the rest. The primary note remains that of salt throughout (actual salt, not brine). With water there’s tangerine peel and a hint of apricot jam; some raisins too.

Palate: On the palate this is rather Springbank, and not very winey at all at first. All the salt and dusty wood from the nose but much more bourbony in some ways, with more cinnamon and wood spice upfront than on the nose. (Sauternes casks aren’t from American oak, are they?) After a while I begin to pick up some of that leather that often shows up in Springbank and Longrow. Not as sweet as you’d expect a Sauternes cask matured whisky to be (certainly not as sweet as Glenmo’s Nectar d’Or which spends a year fewer in Sauternes wood). As on the nose, the wine notes become more apparent with time but remain integrated. I’d say it’s the supple mouthfeel that most signals the wine cask aging. Water seems to make it more sherried, oddly enough, with orange peel and some tannic, drying woodiness emerging.

Finish: Long. Spicy and it’s here that the wine is most apparent, separating just a tad at the end. Starts getting quite dry with water.

Comments: Odd how the secondary maturation in Sauternes wood brings this Hazelburn closer to its Springbank and Longrow stablemates; though I did get a slight leathery note in the other Hazelburn I’ve reviewed as well. And this may well be more winey than I am making it out to be/experiencing it to be tonight; it’s just that my most recent wine-cask whiskies have been the rather egregiously winey Bruichladdich Black Art and Glenmorangie Artein and this seems positively subtle by comparison. I don’t know that I’d reach for this very often but it’s a nice change-up from what I usually drink.

One thought on “Hazelburn 8, Sauternes Cask”