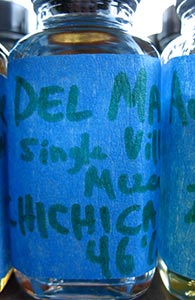 I know nothing about mezcal but I’m not going to let a little detail like that stop me from reviewing one anyway. This particular mezcal is one that a lot of whisky geeks have been gushing about for some time now—it apparently has a smoky quality quite reminiscent of Islay whiskies. It also has going for it the fact that it’s a mezcal from a single village, Chichicapa. Indeed, the bottlers, Del Maguey, release a number of single village mezcals, some priced rather extravagantly. I’ve not quite been able to bring myself to pull the trigger on a bottle, as it runs north of $60 in most markets, but thanks to a sample swap I’m able to finally check it out.

Del Maguey, Chichicapa (46%; single village mezcal; from a sample received in a swap)

Nose: Nail polish remover at first and strong whiffs of gasoline. Then quite a lot of peppery fruit begins to appear: melon, grapefruit. Some floral notes too and then expanding lime (peel). After a bit it gets quite creamy and custardy. With more time the fruit gets quite intense. Not much change with water.

Palate: Peppery lime and some custardy sweetness with it. I can’t say I’m getting any smoke as such. Closer to eau de vie than Islay, I’d say. A little soapy. With time it’s flowers not fruit that are foremost on the palate and later there are some bell peppery notes as well. Water does nothing for/to the palate either.

Finish: Long. The creamy, peppery fruit thing keeps going. After a while there is some mild smokiness playing around the back of my tongue. The smoky note expands with time and there’s something savoury that lingers with it as well. Water pushes the smoke back a little.

Comments: It’s on the finish that the Islay association makes sense. Not bad, and it did grow on me after an indifferent start, but I don’t think I need a bottle. A bit of a relief, frankly, as I cannot afford to get interested in any more types of spirits. That said, I wonder if there’s significant batch variation as most of the rave reviews I’ve seen are of a 47.6% bottling.

Thanks to Bryan F. for the sample!