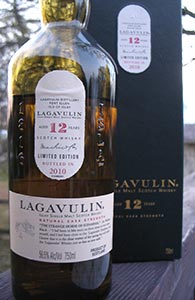 This is the second entry in my ongoing, slow-motion Lagavulin 12 vertical. The first is here. Let’s get right to it.

Nose: Cereally, lemony peat. But beneath the soft cereal note there lurks a pungent, iodiney (iodinesque? iodinysian?) beast that is waiting to punch you in the nose if you get said organ too close to it. And this beast has been chomping on some rotting kelp. After a few more minutes though the beast calms down (I really regret starting on this metaphor, can we agree to abruptly let it go now?) and there’s a very nice deep, organic sweetness that emerges (“organic” as in sweet, rotting organic material) but it’s accompanied by salt crystals. With more time, the lemon, the organic sweetness and the salt are in perfect balance and there’s also strong whiffs of gasoline. It gets sharper with time and there’s more aromas of bandages etc. in an old-timey doctor’s office. I realize I haven’t actually mentioned smoke, but there you are. Gets sweeter again much later and there’s some vanilla fighting its way out too now. With water the lemon intensifies and turns to citronella.

Palate: Sweet, lemony and here’s the smoke, a huge wave of it, but it crashes back into lemon again. It’s quite obviously very strong but it’s also very drinkable at full strength despite that. Some peppery olive oil (this may be a textural thing causing a taste association). Becomes quite maritime with time: the lemon is joined by kelp and brine and there’s a bonfire burning on the beach too now. There’s other fruit here too, but they’re so concentrated and compressed that it’s hard to pick them (maybe some grapefruit and some stewed apple and a hint of tart apricot). Okay, let’s add water before it’s all gone. Gets ashier with water and there’s also a minerally, stony note now. Still quite sweet. If anything, gets more intense with a few drops of water.

Finish: Very Long. Ash and a sweetness that’s intensely peaty and medicinal and fruity at the same time. And there’s an almondy softness that lingers as well. Oh my lord, this hangs on forever. The finish doesn’t change very much with water; perhaps becomes a tad more medicinal.