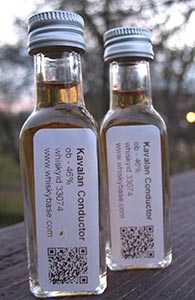 After yesterday’s unprepossessing and prosaically named Kavalan Single Malt here is another that is at least more extravagantly named. “King Car”, it turns out, is the name of the conglomerate that owns the distillery. As to whether “Conductor” is meant to call up an image of a man in a penguin suit in front of an orchestra or someone selling tickets on a bus, I don’t know but it’s a good job this conglomerate has an evocative name; though it would also be fun to drink a whisky named Taiwan Heavy Industries Limited or similar. But enough meaningless chit-chat. On to the whisky.

The website is no more forthcoming with details about how this is made than they are with the regular Single Malt, but it is distinguished from the other by at least a higher abv: this is at 46%.

Nose: More spirity and less fruity than the Single Malt. I know this is also a single malt but there’s something grainy about this, or at least plasticky. With more time some fruit does emerge–some citrus, some apricot–along with some hints of honey but it’s all quite restrained. It does get a little richer with time and there’s some polished wood too now. Water expands the apricot and there’s something a little more musky there too now; a hint of ripe pineapple too perhaps.

Palate: Not spirity on the palate. Orange peel and apricot along with a nice malty roundness make the first impression and then there’s some honey and that polished wood. The wood gets a little more assertive on the second sip and now there’s more spice as well (cinnamon). A darker, richer sweetness later but nothing very interesting. Again, as with the Single Malt, a metallic note does get more prominent with time. Water doesn’t do very much.

Finish: Medium. Not a tremendous amount of development. The spicy/woody notes from the tail end of the palate hang on and get a little bit peppery too. Gets sweeter with time and water.

Comments: Unlike the Single Malt this one started out unpromisingly on the nose but then got a lot better. I hate to engage in regional profiling but there is something here that is reminiscent of the Yamazaki 12. On the whole, though, even at its best this is a little generic. I’d happily drink it though in the absence of anything better and if properly priced it would be a worthy competitor for the Aberlour 12 and the younger Glenrothes and similar.