On’s Kitchen (at 1613 University Avenue W. in St. Paul) is one of our very favourite places to eat in the Twin Cities. It is a family-owned Thai restaurant started a few years ago when owner/chef On Khumchaya left the kitchen of the Bangkok Thai Deli (further down University Avenue). There was a marked dip in the quality at Bangkok Thai Deli after she left, and we haven’t gone back since we found her again a couple of miles up the road–they may well have recovered.

Anyway: On’s Kitchen’s menu contains a lot of the familiar Thai dishes that can be found on the menu of every Thai restaurant in the US, but there are also a number of more esoteric things on it that are well worth checking out. We’ve eaten up and down the menu and every meal has been at least very good–with one exception when On was away in Thailand. Everything is made to order and has the clarity and depth of flavour which tells you that they’re not using commercial pastes or taking any shortcuts. And unlike at almost every other Thai restaurant in Minnesota the food here is not cloyingly sweet. Service can be a little bit spotty when the restaurant is full–there are only two people serving and bussing the tables–but this is really a very minor complaint.

We ate there again yesterday with some friends and, as is usual with us, ordered somewhat excessively. This may have been our best meal there–not one thing came close to disappointing. What we got (shared by five adults and three children of various ages):

(Click on the thumbnails for larger images and descriptions.)

Chicken Satay: This was for the kids and so I cannot report on it, but our older brat ate three of them so that’s a vote of confidence. 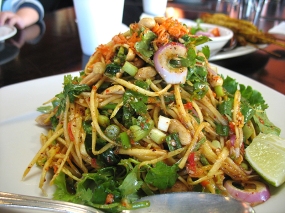 Mango Salad: Strips of mango and dried shrimps tossed with a tangy lime dressing. Wonderful balance of sweet, sour, salty and hot flavours and a kick like a mule’s. The best dish I’ve eaten in Minnesota in at least 6 months. 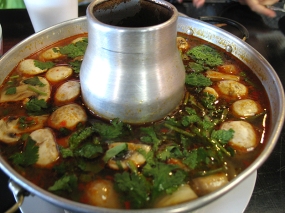 Tom Yum with Shrimp: Again, just quintessential Tom Yum with bright acid from the lime and a punch in the face right behind it from the chillies.

Khao Ka-Mu: Pork braised (I think) with five spice and soy sauce and brown sugar, served over a bed of Chinese broccoli. Sweet and mild on its own but quite dangerous if you mix in the seasonings included on the side. 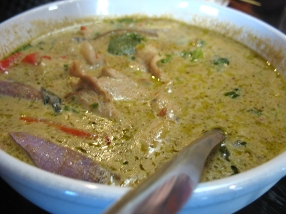 Massamun Curry with Beef: See above. 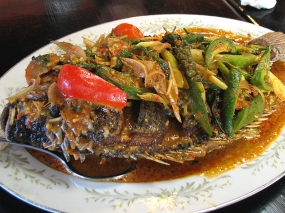 Pla-Lad Prik: A deep-fried whole Tilapia with thick red curry poured over it. The fish was perfectly cooked and the curry, thick with coconut cream and redolent of green peppercorn and lime leaf, was wonderful. We’ve had a number of these whole fish dishes and they’re all excellent. I particularly recommend the crispy one with three-flavours sauce and the steamed fish with lime and chillies.

All of this came to $136 with a generous tip. A lot of food, yes, but we did make a big dent in it. Still, three more adults could have eaten and we would still have generated leftovers (we brought a decent amount home) and then it would have been something like $16/head which is an absolute steal for food this good.

Other than the dishes that are meant to be mild (the satay and the pork) we got everything Thai hot. Well, that’s not true–we asked for the curry with the whole Tilapia at the medium setting. While Thai hot at On’s Kitchen is not fully Thai hot (at least not as served to us) it’s pretty damned hot by Minnesota standards. And I would suggest that you get most of these dishes at the highest heat setting you can deal with (and push yourself a little maybe) so as to get the flavours in proper balance. The Mango Salad, for instance, would probably still be very pleasurable at the medium or mild settings but the full-on chilli kick really takes it to another level.

A very good meal, and we’ll be back again soon.

(And for the whisky-interested folk who may have read this far, there was a small whisky connection at the meal as well: my friend Rich showed up halfway through and we did a mini-sample swap.)