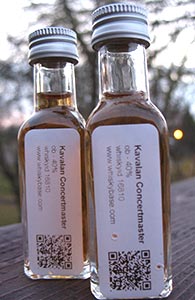 This is my third Kavalan. I thought the basic Single Malt was just about acceptable and the King Car Conductor was decent. Now to see what this port finished Concertmaster is like. I’m not sure if this is just the regular Single Malt finished in port pipes or what the relationship is between this one and the higher strength Vinho Barrique (which I have not tried). So many mysteries. So many uninteresting mysteries.

Nose: Rich and fruity. The influence of the wine is clear but this still smells like whisky. Red fruits lead (cherries, strawberries and cream) and then some oak behind it. Some apricot and citrus emerge as well after a minute along with some flambeed banana. Quite nice. Now will the palate match it? Quite some time later the red fruits are all gone, and now it’s just the apricot and tangerine peel and some honey.

Palate: The polished wood and apricot/citrus lead on the palate but they’re not really followed by anything other than a generic oaky spice. The texture is too watery. With the second and third sip the fruit intensifies a litle, but just a little. Later there’s a hint of the tropical fruit people say Kavalan has in spades, but not much more than a hint. A few minutes later the hint rises to the level of suggestion.

Finish: Medium. No real development. The oaky spice hangs around for a bit. Later the fruit begins to stick around as well and there’s also a hint of milk chocolate.

Comments: Well, this is very nice on the nose. And while the palate starts out very thin it does gain quite a bit of heft and a rich fruitiness. Too bad they released it at 40% as I bet this would be really very good at 46%, let alone at cask strength. This is easily the most substantial of the three I’ve tried so far. Still, on the whole, my introduction to Kavalan has not quite lived up to the hype–but this one suggests that better things may be possible. It must be said though that none of the three I’ve tried are their front-line bottlings which get all the raves. If I can secure some samples of those I’ll report on them early next year.