This is the second in what I’d hoped would be monthly fine dining reports from the Twin Cities. Of course, we didn’t make it up to the cities for dinner in November on account of a crowded schedule and we’re off to India in January. So the next report won’t be till February, after which point hopefully we’ll be able to make time for a nice dinner out every month.

We’ve been hoping to eat at Tilia for some time now; however, we were somewhat underwhelmed by our meal at The Bachelor Farmer in October and so considered returning to the arms of the always reliable Alma for our next meal (when you have small kids and limited opportunities it is harder to stomach disappointments). But in the end we decided to chance the new.

Also very popular and very well reviewed, Tilia is located in the somewhat tony Linden Hills neighbourhood between Lake Calhoun and Lake Harriet in Minneapolis. We were supposed to be eating with some friends but they were late scratches on account of illness and miscellaneous. As we already had a babysitter lined up we decided to go anyway. In the end it may be a good thing we went by ourselves. Tilia does not take reservations and turned out to be rather small and cramped. We probably would have had a very long wait for a six-top (it was very full at 9.15 pm–late by MN standards, even on a Saturday) and not been very comfortable either.

As it is we were seated at a two-top right by the bar alongside the open kitchen and it felt like every server in the restaurant knocked me in the head or back at some point during dinner (scroll down to the last picture on this page; we were at the two-top in the middle). And there was a very bright light at the bar that went on and off like a spotlight on our table as the wait staff blocked and unblocked it every few seconds. Yes, it’s a casual place (lunch every day with a kids menu, open for weekend brunch, and an edited after hours menu from 10 pm to 1 am); but maybe a couple fewer tables might make it a little easier for those eating and those trying to navigate the tables to serve the food? Anyway, on to the food.

As is the style these days, Tilia’s schtick is a lot of small plates to be shared and a smaller selection of traditional entrees. We got three small plates to share and an entree each. What we ate (clicking on the images will open larger versions, with captions, that will allow the craptitude of my camera to really shine); descriptions of the dishes are in the captions: 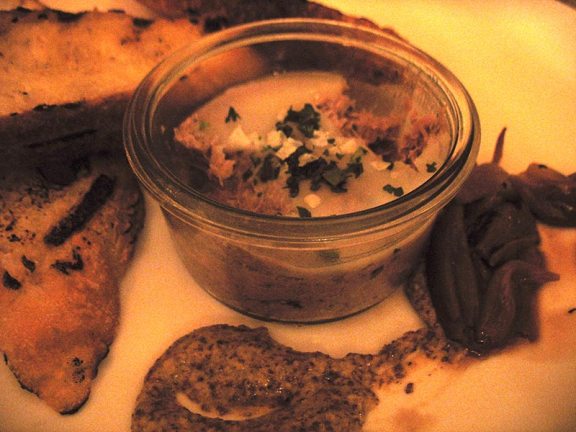 Small Plates: “Today’s Potted Meat w. Shallots, Mustard and Grilled Bread”: I’m not sure how much variation there really is from day to day but on this night it was duck confit and was fine. 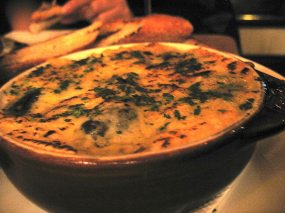 Small Plates: “Escargot w. Maitre’d butter, Mushrooms & Gruyere”: Not surprisingly, a gratin. Drowned in cheese and accompanied by large crimini mushrooms the snails themselves were lost. Not bad as a dip though. 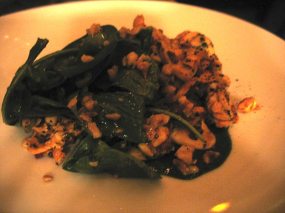 Small Plates: “Grilled Octopus w. Romesco, Salsa Verde, Loomi and Hazelnuts”: No, I don’t know what Loomi is (presumably this). This was very well composed and the flavours, on the whole, were excellent and complementary. However, the octopus had been tenderized almost to the point of mushiness and as such barely showed any signs of having been grilled. With a little more texture and crispness on the octopus this could have been outstanding. Perhaps on other nights it is. All of these, by the way, were fairly generous portions (and each came with massive hunks of toast). Two could probably make a good meal of five or even four of these small plates. 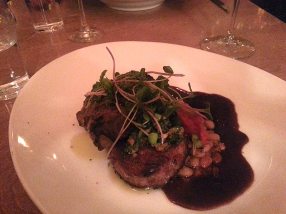 Mains: “Lamb T-bone with white bean ragout”. The lamb was cooked well but the dish was overly salty. 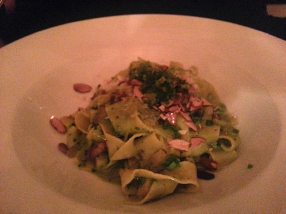 Mains: “Tagliatelle w. Pancetta, Parsnips, Spinach, Almond, Jalapenó, Parmesan”. This was the missus’ entree and it was really rather nice. She only got a half portion and it was plenty. A very nice mix of textures and flavours and perfectly cooked pasta. Just a tad too salty though. 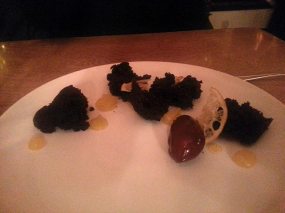 Dessert: We were rather full and so decided to split one dessert from the very short list of possibilities that were recited by our waitress. We chose a steamed chocolate cake with dehydrated orange etc. (I cannot recall the exact description and didn’t want to be writing stuff down as she was talking). This was a complete and utter disaster. I suspect it was meant to be a “deconstructed” presentation but the cake arrived looking like it had been salvaged from the jaws of a starved terrier: four chunks of dried and crumbly chocolate cake that I would have been ashamed to have produced were strewn across a plate with various accoutrements of orange subjected to an amateur chemistry set. I was hoping someone would ask me how we enjoyed it so I could have told them but they didn’t ask. We did not finish it.

Along with two glasses of prosecco (Carpenè Malvolti) and a glass of malbec (Tikal, 2009) the meal came to $130 with tax and tip. Despite the amateur hour dessert and the salt issue with the entrees (especially the lamb) this was, on the whole, an above average meal and we’ll probably return at some point. Which means I recommend it. Not a place for an intimate outing though.