I know I’m terribly hard to please when it comes to eating out at the high end in the Twin Cities, but there are two places of which I rarely have complaints. One is 112 Eatery and the other is Restaurant Alma. We’ve eaten at Alma about 5-6 times in the last few years–which, given how little we can go out now and how rarely we ever return anywhere for a second meal, let alone a third, is really saying something. While many trendier places have opened in the seven years that we’ve been in Minnesota, and received a lot more enthusiastic press, local and national, Alma just keeps on keeping on with excellent, seasonally-focused food that seems more classicist than it really is.

There’s a lot of modern technique employed in the cooking here and a lot of bold combinations of flavours and components but what’s on the plate is never showy for its own sake (if it’s showy at all) and you never get the sense that the choices are being driven by trendiness or a desire to exhibit the chef’s attention deficit disorder as virtue–as, for example, in all those places that give you a small piece of meat with small dabs of 75 different sauces (“how about you choose one, or maybe two that work really well with the pork and just give me more of those, genius?”). There has been an increasing drift towards “fusion” over the years, and more and more Asian-influenced dishes seem to be on the menu now. And given my general antipathy towards Asian fusion in European-American cooking I have to simultaneously note that Alma’s entries in this dubious genre bother me less than most, and that while the dishes I was least enthusiastic about in the meal reviewed below had strong fusion elements, so did some of the ones I liked a lot.

The biggest knock against Alma might be that it is perhaps a little more casual as a restaurant than its food deserves, or that its prices might indicate. But that’s both a larger, inescapable trend and a specifically Minnesotan thing where your choices seem to between the ridiculous, and largely substance-free, theater of upscale dining at places like La Belle Vie or the aggressively casual (almost everywhere else).

The only other complaint I have is that their current menu system is a little deceptive. Alma has always (or at least since we first started eating there) allowed diners to create a prix fixe meal of selections from selections for three courses all of which used to be priced a la carte on the menu as well. Now the menu only lists the prix fixe option with no individual prices listed for anything. When I asked our server why they’d stopped offering the carte she said it was because diners were apparently confused about how the carte related to the prix fixe and that everything was still available individually priced if desired; this shift was apparently made with diners in mind. If this is indeed the official reason it is at best disingenuous. The current menu doesn’t even indicate that an a la carte option is available and who, after all, is going to ask their server the price of every single thing they might be interested in. This way the restaurant gets to sell everybody three courses (plus dessert) as a default and it’s really to their benefit.

Anyway, on to our meal. The descriptions and evaluations of what we ate are in the captions of the slideshow that will open up when you click on the thumbnails below (and as these pictures were taken with my new camera they’re a lot brighter than those in previous dinner reviews). Four of us ate; we each got the prix fixe and everyone was willing to put up with my not so subtle pressure to not repeat anything in our orders. This means we ordered four of the five selections available in each course; and as we shared bites you can consider this a fairly comprehensive overview of the current menu (though it has been two weeks since our meal, and the menu may have changed–it changes ever six weeks or so). All this food plus a bottle of wine, tax and tip came to $338.

Let’s start with the one true low note: why do fine restaurants put cold, hard, un-spreadable butter on the table?

Slow Roasted Endive, alpine style cheese, breadcrumbs & smoked mustard: This was mine. I know, roasted endive doesn’t seem terribly promising but this was rather nice and may have been the best of the four first courses. Caramelized, sweet endive with a nice crunch from the breadcrumbs and the mustard was great too. Wonderful balance of textures and flavours.

Roasted Vegetables, potato purée, fried oysters & basil-anchovy dressing. Also rather excellent. The coating on the oysters was perfectly crisp while the oysters themselves were juicy. Nicely put together; the one complaint from the person who ate most of it was that the basil-anchovy sauce was a little sparse. 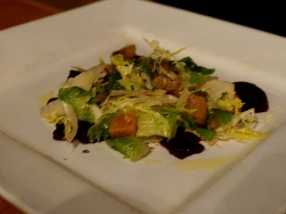 Beets & Sheep’s Milk Cheese, spiced chestnuts & walnuts, brussel sprouts, verjus. This was fine. The cheese surprised by being hard rather than soft. Nicely composed as were the previous two.

Celery Root Flan, warm celery root salad, caviar & toasted brioche. This was fine too but was my least favourite of the four first courses, a bit of a pity as with the caviar this carried a $5 supplementary charge. However, the missus who ate most of it liked it a lot more than I did. I guess the perfectly concentrated essence of celeriac doesn’t do it for me. 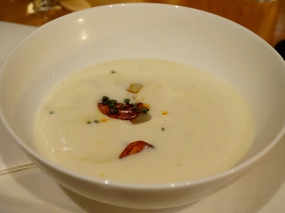 On to the second courses: Salsify & Poblano Cream Soup, spanish chorizo, bay scallops & chive. This was mine. Again, Salsify soup doesn’t sound like something you’d line up for but this was wonderful. Perfect texture, nutty sweetness and lovely sweet scallops (over which the soup is poured) and a nice salty bite from the thinly sliced chorizo. Not much evidence of the poblano though.

Carolina Rice Grits, pork broth, shrimp, shiitakes & horseradish. This was excellent, and like the salsify soup, perfect for winter. I got a scoop of the grits and broth which were great; I’m told the shrimp were perfectly cooked too.

Chickpea Crepe, smoked chicken, yogurt, cucumber & curry. I’m afraid I didn’t think much of this; I’m afraid when fine restaurants try to do Indian flavours they tend to produce sauces that don’t taste very different from curry house fare. Not the greatest presentation either. The person who ate most of it liked it more than I did though.

Crispy Sweetbreads, angel hair pasta, red miso glaze & sweet pickles. This was the pick of this round. And as it was the missus’ I managed to get more than one bite. The sweetbreads, like the fried oysters from the first course, were done perfectly, and the miso glaze was lovely. 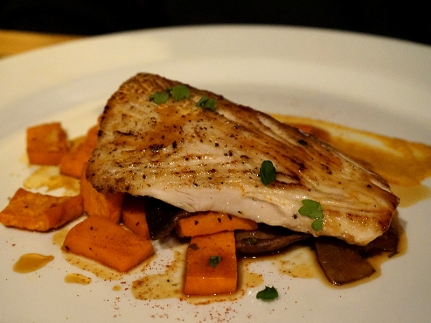 And now the third course: Smoked Mahi Mahi, roasted sweet potatoes, shiitakes & sherry jus. The fish was cooked nicely (though it didn’t seem particularly smoked from the bite I took), everything was fine but it didn’t really do it for me. I don’t know that the veg. sides were very well chosen–some wilted greens would have been nice. 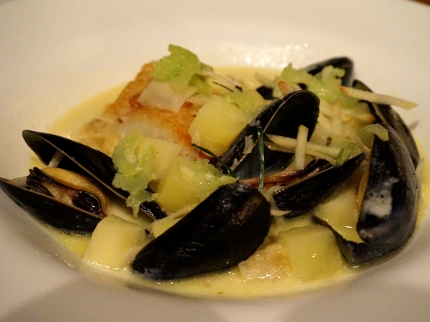 Alaskan Cod & Wild Mussels, hard cider, cream, potatoes, leeks & apple. This was the missus’ and so I tasted quite a bit of this one as well. Perfectly cooked fish and mussels and I liked the textural interplay with the potato and apple but I thought the sauce was just a little too cloying–needed some acid.

Glazed Beef Brisket, coconut-jalapeno sauce, cashews & sauteed chard. This was mine and it was very good. Again not very much more evidence of the jalapeno than there was of the poblano in the soup but the sauce was a nice counterpoint to the falling-apart brisket; liked the chard, not as sure about the cashews. But I didn’t end up eating all of this…. 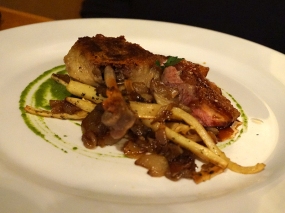 Pan Roasted Duck, roasted parsnips & oyster mushrooms, cumin mojo. The duck breast was a little too rare for the liking of the person who got this and so I swapped half my brisket for this. And boy, I think I made out like a bandit. I thought the duck was dynamite (and filled the void left in me by the disappointing duck at the Bachelor Farmer in October). And once again they did a wonderful job of making boring winter vegetables appealing.

We were a little full and so we split a couple of desserts: Manchego Cheesecake, poached quince, marcona shortbread, caramel tuile. Just great–I was expecting a dense cheesecake a la those made with ricotta but this was almost frothy in its lightness. You have to like manchego though. The poached quince and figs matched perfectly.