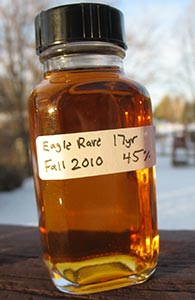 Every famous group has one member that doesn’t get as much respect as the others from the general populace and the Eagle Rare 17 is the Charlie Watts of the Buffalo Trace Antique Collection. Of course, Charlie Watts was a great drummer and the Eagle Rare 17 is a pretty good bourbon too, despite being the one from the collection that’s most likely to hang around on shelves–at least that used to be the case; I’m not sure if it is anymore now that BTAC-mania has reached Pappy proportions. Anyway, this is from 2010– a more innocent time when there was no hatred in the world, every quarterback in the NFL was openly gay, and unicorns delivered free cases of the BTAC to every home in the land.

Nose: Raisins soaked in honey, sweet caramel and slowly expanding wood. The sweet notes get richer with time and transition from caramel to toffee, and it gets spicier too–some rye, some cinnamon. After some time there’s also some wet slate/granite. With a lot more time it has a fair bit in common with some older sherried Highland/Speyside malts. With water there’s more dusty wood to go along with the caramel and also some nutmeg.

Palate: Very mellow. Starts out sweet as on the nose but then some citrus shows up and takes over. There’s also more of a floral thing happening and some piney/menthol coolness as well. Gets spicier with each sip as the wood emerges but it’s not tannic at all. The sweetness re-emerges with more time still and now there’s darker caramel. Let’s add some water: with water the citrus recedes somewhat and now there’s more toffee here; and there’s that dusty wood that emerged on the nose too.

Finish: Not very long at first but then gets longer with each sip. Some of that floral sweetness lingers but mostly it’s the citrus and spice that seems to hang around. Later there’s more caramel too. Water emphasizes the sweetness.

Comments: I don’t think the Eagle Rare is made from one of Buffalo Trace’s high rye mash bills but I did get a fair bit of rye here, especially on the palate; could it be that even though there’s not much rye in the recipe those notes stand out in the final mix of flavours anyway? The nose was great, I thought, but the palate was not quite at that level. Still, I really like this. Alas, I kept no notes of my long-finished bottle of Eagle Rare 17 from the 2011 release and so cannot compare. And I’ve had no other Eagle Rares. Therefore if you want to know where this falls on the Eagle Rare 17 continuum you’ll have to apply to the people who actually know something about bourbon.

Coming up next: a review of the regular Eagle Rare 10.