I apologize for not having a whisky review on International Whisky Day, which marks the birthday of the late, great whisky writer, Michael Jackson. I do have news that will delight the majority of my whisky-focused readership: this is the last of my food reports from our Delhi trip earlier this year. (You could, of course, skip this and instead read the Aberlour A’Bunadh vertical I published last year on this day, when my blog was still very new.)

Anyway: this is a report on a very nice and very casual meal at Carnatic Cafe, a small restaurant in the Friends Colony shopping center in South Delhi that serves what has been for many decades now one of the most popular cuisines in India, and the only one that could rival the reach and popularity of Mughlai and Indian Chinese food. I refer, of course, to familiar South Indian vegetarian food: idlis, dosas, vadas and so forth. I apologize for being so geographically inexact–I am just trying to give a sense of the view from the not very culturally sensitive North. It is only relatively recently and still not particularly pervasively that this food has been identified in North India with more specific South Indian locations, and most specifically with the name “Udupi”. In my youth all of South India was contained in the descriptor “Madrasi” and this food generally had that or some other recognizable signifier of South Indianness slapped onto it.

I grew up on airforce stations (bases) in obscure parts of India and I remember that just outside the gates of the airforce station outside Adampur, a small town in Punjab, there was a Madras Cafe and a Kerala Cafe. This was in the mid-1970s and I was very young so please do not trust too much to my memory but I recall that they had identical menus. In the early and mid-1980s my parents lived in Hyderabad (sandwiched around a couple of years in Chandigarh) and it was then that I had my first decent dosas and especially idlis, and then that I learned that people from South India ate more than idlis, vadas and dosas (all dipped in sambhar and coconut chutney, of course). The pleasures of curd rice and lemon rice and tamarind rice were wonderful discoveries–all made, as it happens, in the railway cafetaria at Vijaywada, a major junction where I changed trains for Hyderabad when returning from boarding school in Darjeeling. I finished my last two years of high school in Hyderabad and the “hotels” that served this food, always cheap, always hygienic, were among our favourite haunts.

Standards in Delhi, where we lived next, and where I went to university, were not quite as high but improved dramatically over the next decade and more. At the forefront of this progress was the venerable Sagar in the Defence Colony market (a few doors away from the far more recently opened Swagath–a lag that also illustrates how much more recently the average North Indian learned that not all South Indians are vegetarians). Always jammed with lines down the front, Sagar spawned a number of followers all over Delhi. The most significant of the openings that came in its wake, however, were the first Delhi outposts of Saravana Bhavan, a legendary Madras/Chennai chain. By this point in the late 1990s/early 2000s these restaurants were serving food aimed not at North Indian but migrant South Indian palates and Saravana Bhavan was the gold standard. So much so that it has survived the scandal of its founder P. Rajagopal abducting and murdering an employee’s son-in-law so he could marry his young wife. You can’t make this stuff up.

Saravana Bhavan remains very popular and very difficult to get into at lunch time and is really not a place to go to with young children–it’s extremely hectic, tables are shared and you’re expected to eat quickly and not linger. As we wanted our boys to try the food it had to be at lunch and so we repaired instead to the far more laidback Carnatic Cafe, which came highly recommended from a number of different directions. There’s a story that the owner opened it with a view towards generating funding for his film career, but the friend from whom I heard this is a notorious fantasist (she’s a historian in her day job and so feels the need to compensate) so please don’t take it too seriously. We met another friend there and had a rather large lunch.

What we ate (click on a thumbnail to launch a slideshow of larger images with captions): 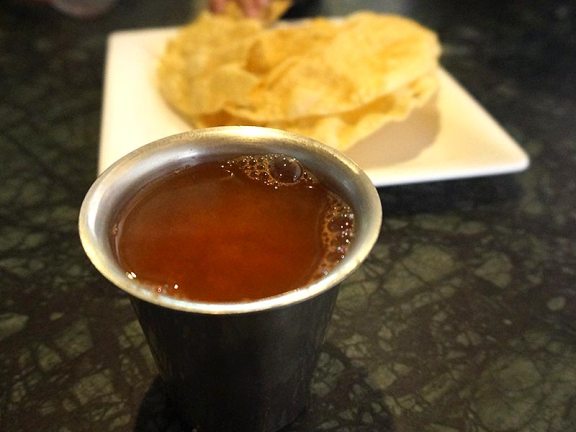 We started with some rasam. Tangy and spicy, this was just great. My stomach just rumbled thinking about it.

Idlis with sambhar and chutney. The idlis themselves were just fine but man, the chutneys were dynamite. Everything came with them and I may have eaten my weight in the coconut chutney alone. 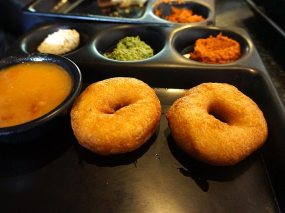 Lovely vadas along with more of those incredible chutneys. The sambhar was not half bad either. 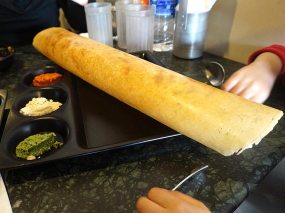 A paper dosa, so called on account of its thin, crisp nature. Very nice. This was for the boys, but as it turned out they preferred the next one. 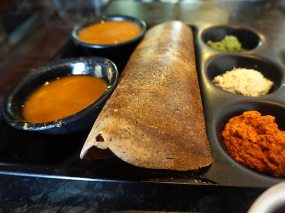 Raagi Dosa. Made with the addition of millet flour, this was both striking to look at and very good. 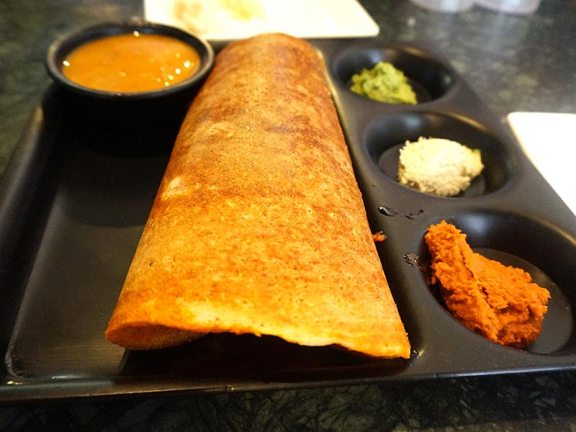 The so-called Malleshwaram 18th Cross dosa, named for a Bangalore neighbourood. Thicker than the others and in proper Bangalore style the inside of the dosa is smeared with a spicy paste made from ground lentils and red chillies. Great stuff.

And the spicy paste. 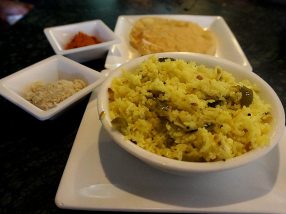 A completely gratuitous lemon rice which was very good but more importantly gets me off the hook off only ordering idlis, vadas and dosas.

And filter coffee at the end. I don’t drink coffee but this was enjoyed by the American coffee drinker in the party.

So, a very nice meal. I wish similar food of this quality were available in the Twin Cities as I would like to take my boys to eat it as my parents took me as a child. Alas, the few places that serve it are dire. If you have a recommendation (resting on more than just enthusiasm) please drop me a line.

And so end the Delhi food reports. Next up, a long series of dining reports from Sioux Falls, South Dakota. Well, not really. There will be 3-4 restaurant reports from the Twin Cities and environs each month, and another flurry of reports from L.A later in the summer, but until then the focus of the blog will return largely to whisky. I do hope more people enjoyed these reports than I suspect is the case–if you’re going to Delhi any time soon you could do far worse than use these as your meal planning guide.