With just a day to go here is your Twin Cities fine dining report for May.

Brasserie Zentral is a new entrant in the revitalized downtown Minneapolis restaurant scene, born of the same team that owns and runs Meritage in St. Paul. Where Meritage is French the cuisine at Brasserie Zentral is a modern(ish) take on central European food, with the emphasis seemingly on Austria (or at least the Austro-Hungarian empire circa 1910). If your notion of Austrian food, like mine, is largely drawn from The Sound of Music and specifically “My Favourite Things”, you will be pleased to know that their menu features crisp apple strudel but perhaps less pleased to learn that their schnitzel is presented sans noodle. But, on the whole, you are likely to enjoy what you eat. That is to say, we had a very nice dinner there last week, a month or so after they opened (which seemed like a reasonable amount of time to wait before going–they’ve already received a fair bit of positive buzz though).

The space is casual but nice enough (though you do have to take a trip to the bathroom just to get a load of the lobby in the building the restaurant is in). There are large booths and tables and an open kitchen and a fancy bar that was not seeing any custom at 9 pm on the Friday night that we were there; indeed, the restaurant as a whole was not terribly busy–we had reservations but wouldn’t really have needed them. Perhaps the word isn’t out yet, perhaps it’s the construction ongoing on the outside, perhaps other people are being even more prudent than us with timing; or maybe central European food isn’t a very sexy proposition. This last is actually true at Brasserie Zentral: it’s not sexy food but, to reiterate, it is quite good.

Here is what we ate (there were four of us)—click on an image for a larger slideshow with captions: 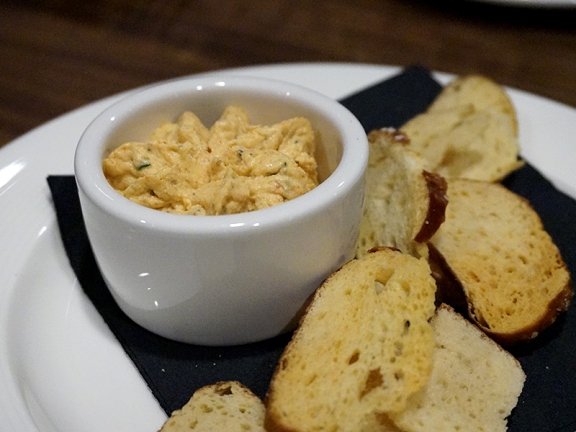 Instead of butter there was a cheese spread with some small pieces of thinly sliced and crisply toasted bread. Pleasant enough, but good butter is always nice. 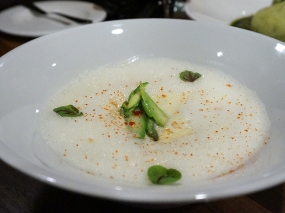 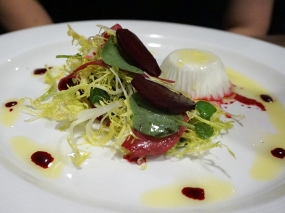 Corned Veal Tongue Salad, Horseradish Pannacotta, Frisee and Beets. Also quite good even if there was rather less of the veal tongue than one might expect. The horseradish pannacotta was a nice touch. 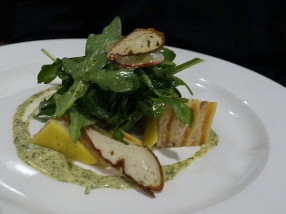 Smoked Fish Tort, Salmon and Trout, Mustard Cream, Rocket Salad, Radishes. This was fine but seemed to me to be more like something I’d want to snack on early in the evening with tea than eat as a starter for dinner. Yes, we roll swanky at high tea at Chez Annoying Opinions. 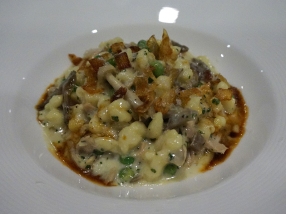 Quark Spaetzle, Aged Gruyere, Braised Rabbit, Chanterelles, Peas. This was mine and it was dynamite. It may have been the best thing I tasted all night. Not a thing on the plate that wasn’t complementary in terms of flavour or texture and everything in balance. 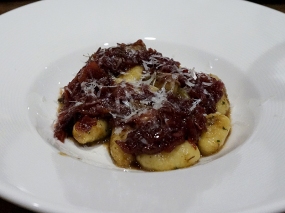 Potato Gnocchi, Lamb Neck Ragout, Braised Red Cabbage. This was okay. Nothing wrong with it but it was solid and workmanlike. 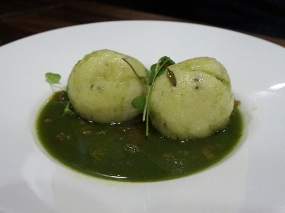 Semolina Dumplings, White Wine Cabbage, Green Herb Consommé. Pro-tip: when they say “Semolina Dumplings” what they mean is “Matzo Balls”. Yes, this was basically a fancy matzo ball soup. And it wasn’t very interesting. And we didn’t finish it. 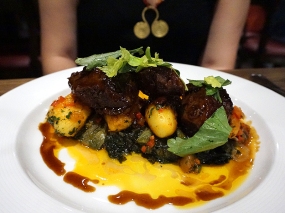 So, a pretty good first course overall. On to the mains! (We were more coy here and only got one each.) Pork Cheeks Braised in Maibock Beer, Potato Goulash, Escarole, Lovage. As you can see, an elaborate construction and rather large. Quite tasty too but more comfort food than inspired. There’s nothing wrong with that, of course, but it’s probably not something I’d want to eat in the spring or summer. 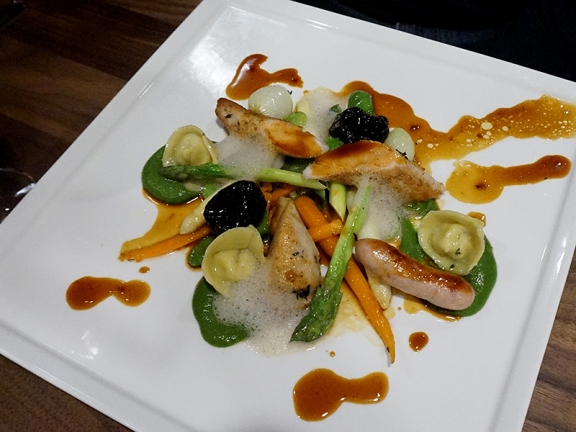 Stuffed Loin of Minnesota Rabbit, Rock Shrimp, Prunes, Asparagus & Fava Beans with a Black Pepper Emulsion. Now if you’re looking at this as written you’re probably wondering what the hell rock shrimp has to do with anything. And you’re absolutely right to wonder: it comes in tortelloni and while it tastes fine on its own it makes no sense on the plate (except from a visual perspective). The rabbit, presented sliced and as sausage, however, I am pleased to say is excellent and everything else was well paired with it. 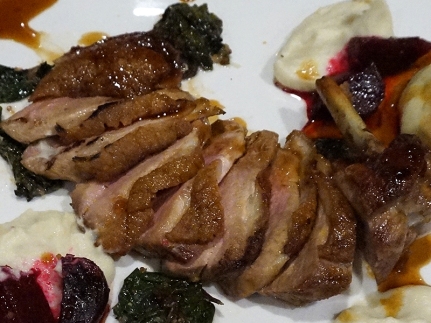 Honey & Lemon-Thyme Glazed Breast of Minnesota Duck, Salsify-Horseradish, Roasted Beets, Duck Crackling Dumplings. This was mine and the duck was overcooked. I brought this to the attention of the hostess who was passing by, she readily agreed and took it back for replacement. I have to say the duck was so obviously over that it shouldn’t have made it to the table in the first place but they took care of it without any pushback whatsoever–handled very smoothly indeed. 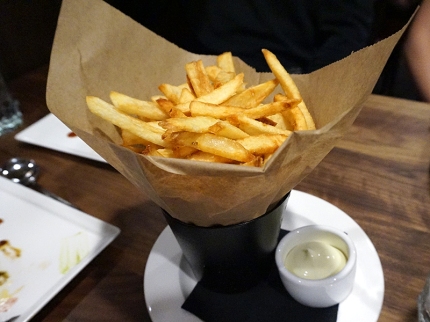 While I waited for a new plate to return I snacked on everyone else’s food (to their great delight) and also on these complimentary Belgian Frites with Mayonnaise. Good fries, good mayo. But I’d rather have been eating my duck. 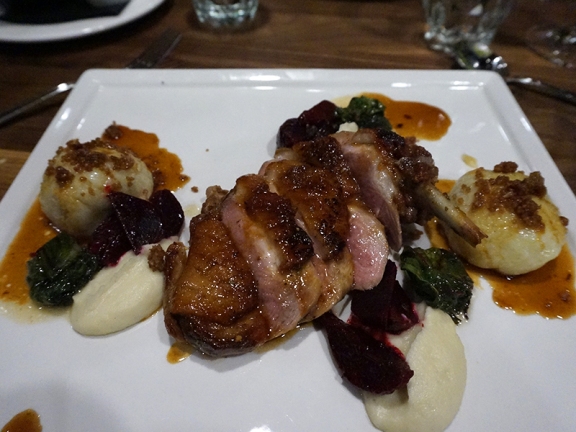 Honey & Lemon-Thyme Glazed Breast of Minnesota Duck, Salsify-Horseradish, Roasted Beets, Duck Crackling Dumplings. Properly cooked, the duck and the glaze in particular were great. I also liked the salsify-horseradish and the beets but the duck crackling dumplings, tasty though they were, were heavy and a bit much. Maybe just one would be enough? 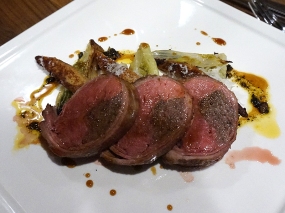 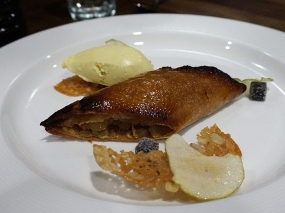 Unfortunately, they do not list their desserts on their website yet, and so I can offer only the most rudimentary descriptions of the three desserts we ate. Apple Strudel. As crisp as Maria Von Trapp would have wanted it to be and probably exactly as it should be, but habituated as we are to American apple pie we wished the apple had been a little more soulful. Great pastry though. 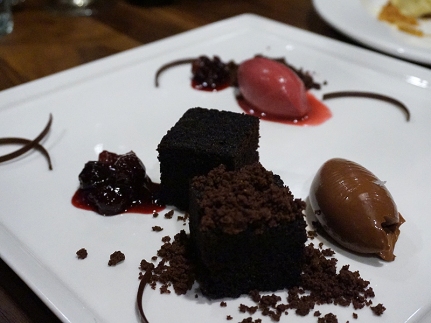 Black Forest Cake. The cake itself was okay, the mousse was great. I didn’t get a bite of the ice cream and can’t recall exactly what it was–passionfruit? 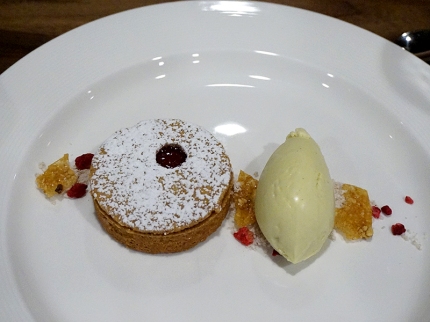 Raspberry-Rhubarb Linzer Tort. This was rather good as was the chamomile ice cream alongside.

As you can see, the portions are midwestern. In a few cases (the pork, the gnocchi, the sides with the duck) there was a little too much on the plate, and the presentation sometimes suffered. Far be it from me to suggest that portion sizes be smaller but I would almost rather have eaten three smaller courses than two courses of the sizes we got (not counting dessert).

All of this plus a few beers and two glasses of wine came to $340 with tax and tip. Not cheap but completely in range with the competition.

A quick note on service: it was excellent. Our waiter was friendly but professional, i.e not over familiar; present whenever we needed him without being obtrusive. And our few questions were fielded ably.

On the whole, a very good meal and based on it I would recommend it highly. And we’ll back at some point.

One thought on “Brasserie Zentral”