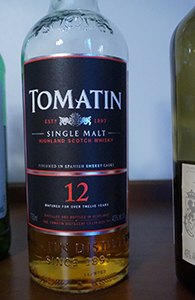 The Tomatin 12 is another of the entry-level malts I’m reviewing this month. Unlike the Balvenie Double Wood it’s not really an iconic malt and it’s also one that I’ve gone through a number of bottles of in recent years—so there’s no real surprise for me in what’s contained in the review. This whisky continues to be one of the great values in single malt Scotch—coming in below $30 in most markets. Tomatin in general continues to be a good value in the US with the 18 year old a category killer in the $60 neighbourhood and the 25 year old challenging Glenfarclas in the most affordable 25 yo category (and even their 30 year old is cheaper than most distilleries’ 25 year olds). Here’s hoping they don’t also fall prey to the siren call of “premiumization” or start trading in good age-stated whisky for dubious NAS bottles.

This 12 yo comprises bourbon cask matured spirit that is then finished for six to nine months in oloroso sherry casks.

Nose: Lemon zest, honey and then more acid. A malty note below that and hints of fruit (apple juice). Water unlocks more of the fruit and now there’s some muskier stuff too: tinned peach and pineapple.

Palate: Very much as on the nose but with more malt and some toasted wood. On the second sip there’s more oak still but also those teasing hints of fruit (apple, apricot, some peach). The texture is a bit thin, but then the bottle I got a portion of had been open for a while. The oak and the fruit meld nicely as it sits and the whole becomes a bit more intense. Okay, let’s see what water does. With water the wood recedes but everything but the acid gets a little washed out.

Finish: Medium. The toasted wood is what mostly remains. More peppery with water and more of the fruit hangs around as well.

Comments: A simple, easy-drinking malt with no real flaws. It doesn’t bring a lot to the table but it doesn’t take anything off it either. One to drink while reading or watching tv or whatever. Everyone should have a whisky of this profile in their cabinet and there should be no embarrassment at all if that whisky is the Tomatin 12. Still, it would be even better if they’d bumped this one up to 46% as they did with the 18 yo when they retooled the range a couple of years ago.