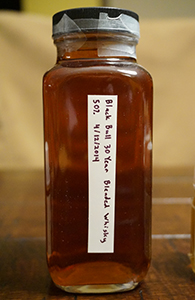 I don’t really know too much about the Black Bull blends. I know the brand is owned by Duncan Taylor and that this 30 yo was blended at origin in the 1970s and then matured for the full term in an ex-sherry cask. So while this has grain whisky in the mix the grain component is also 30 years old and has been marrying with the malt the whole while (and I believe it’s 50/50 grain and malt whisky). That’s all pretty unusual for blends which are usually heavier on the grain and generally blended after the component casks have matured and then married for only a few months before bottling. As to what the sources of the components are, I have no idea. But I’m sure somebody more knowledgeable than me will be along shortly to fill in the details. I think this was released in the late 2000s and that it’s no longer part of the range (makes sense as one would imagine it would be hard to replicate).

I split this, and some other bottles, with friends some months ago. One of those people, Jordan Deveraux of Chemistry of the Cocktail coincidentally posted his own review a few days ago. I have studiously avoided looking at it and will do so only after this review has posted. [And here it is.]

Nose: Starts out very much like dark rum with polished wood and ripe banana; then a turn towards nutty, raisiny sherry with expanding orange peel that gets brighter and closer to lemon as it goes. Very nice. Gets stickier as it sits and there’s a leafy, faintly smoky note too, and with even more time, graphite/pencil lead. With water there’s some toffee as well and light caramel too.

Palate: Curiously blank for a couple of beats but then there’s a straightforward raisiny sweetness that makes an unexpected left turn towards a fruity direction as I swallow—unexpected because the citrus is mixed in with sweeter, muskier almost tropical notes (but these are too brief and never make quite as strong an impression as on the first sip). More caramel than raisin on subsequent sips and the wood begins to emerge earlier. With more time the citrus starts popping out earlier with the sticky, sweet notes (which now edge towards maple syrup)—quite bourbony actually now. Water integrates everything very nicely but emphasizes the sweetness. That leafy note from early in the nose pops up now on the palate—or maybe it’s milk chocolate. With more time the citrus begins to emerge again and it brings some of those previously evanescent musky notes back out again.

Finish: Long. The fruit hangs around for a bit but in the end it’s the raisiny/caramel notes that linger along with woody notes that emerge towards the end. As on the palate, water pushes the citrus back; it also pushes the wood back.

Comments: Very nice, very pleasurable—just what you want on a cold November night in Minnesota. I liked it a lot both with and without water. Neat, the nose is lovely but the palate not quite at that level; with water, the palate is much more complex and trumps the nose. On the whole, a great deal at the price we paid for it and I wish I had more. Just not fruity enough or funky or earthy enough to make it into the 90s though.