Along with some friends we recently purchased half a steer headed to slaughter. It was a fairly large animal and even after processing and dry-aging for about three weeks our share of the meat came to about 80lbs. I’d purchased a very large freezer to hold the meat easily (the last time we did this our regular freezer was overwhelmed) and it is so big that 80 lbs of beef barely took up any room in it. So, of course, I went out and got half a pig (being able to do this kind of thing on a whim is among the few benefits of living in a semi-rural part of the upper Midwest). The goddamned freezer still seems less than half full and we have a lot of beef and pork to eat. Luckily, these are all animals raised without hormones and antibiotics and in fairly “humane” conditions. Anyway, all this is to say that those of you interested in my recipe posts can look forward to a fair number of beef and pork recipes in the months ahead. (And goat and lamb too—this is a monstrous freezer indeed.)

First up, here’s a version of a spicy and tangy pork dish that I have been making to some acclaim for about 10 years now. The exact ingredients are never quite the same and I vary the consistency of the gravy from time to time, but insofar as it is constant it’s a rough pass at versions of some pork dishes I’ve eaten in the homes of family friends from southwestern parts of India. So it’s not a specific regional recipe; but, to blow my horn twice in one paragraph, it is very good. Try it; you will like it. And if you have the ingredients it is very easy to pull together.

Everything but the pork.

In addition to pork shoulder roasts the meat processor we got our pig from gave us packages of “pork shoulder steaks”. I think this is just part of the shoulder. The advantage of having the meat pre-cut as “steaks” is it makes cubing 2.5 lbs of shoulder much easier.

What went into the ground masala. 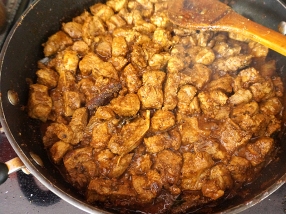 Right before I added the water.

The finished dish artfully positioned for a photograph I hope Foodgawker will find worthy.

And with a bit of cilantro.

Try it out and let me know how you like it.

(And stay tuned for a very simple bonus pork and beans recipe that uses some of the final product from the dry version of this dish—that’ll be up very shortly.)

8 thoughts on “Spicy and Tangy Pork”