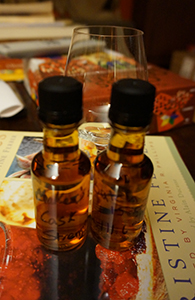 I reviewed the regular Maker’s Mark a while ago and didn’t particularly care for it. In the wake of that review, a number of people noted that the new’ish cask strength Maker’s Mark was far superior; and Eric Burke, of the excellent Bourbon Guy blog, offered me a sample from his bottle. I’m always willing to drink free whisky and a bonus, of course, is that if I liked it the batch it came from would be locally available—Eric is a fellow resident of the satellite regions of the Twin Cities (though his address is not quite as rural as mine). I offered him a single malt as a token of appreciation—he agreed gingerly (he’s apparently really not a Scotch guy) and eventually we met up drug dealer/customer-style in a Costco parking lot to exchange what anyone who saw us closely probably thought were urine samples. That was almost three weeks ago and here I am now with a review. I did not look at Eric’s own notes till I’d gotten mine down but here is the link to his own (far less verbose) review (at the bottom after an account of a distillery visit).

Nose: Honey and caramel mixed in with some citrus (orange peel?). Really quite vibrant. Gets fruitier as it sits with some plum showing up as well; some polished oak too and then an organic, leafy note and some clove. The oak gets more prominent with time but not overpowering. Water pushes the oak back but also kind of mutes everything else.

Palate: Very much as promised by the nose except with a big hit of mint and dill and then a lot more sweetness. Nice soft texture as well and very drinkable at full strength. More honey on the second sip and then it gets spicier. Water mellows it further but doesn’t essentially change it.

Finish: Medium. Nothing new here, with or without water.

Comments: This is everything the regular Maker’s wasn’t: assertive, full-flavoured. That said, looking at my notes for the regular version it does appear that this is very much that but more intense. Very consistent from nose to palate to finish. If not for the price I might have considered a bottle; but given that bourbon is just a side racket for me, I want more from a >$50 bottle. I preferred it neat.

Thanks to Eric B. for the sample!