At the end of my review of Tea House in Minneapolis I noted that I was considering finally trying Szechuan in Roseville. It opened at about the same time as Grand Szechuan but early reports had made me wary and somehow we never went. A friend who shares my view of Tea House, recommended it as worth a try after reading that review and so off we went. Once again, my visiting parents (who are always willing to eat Chinese food, and Sichuan food in particular) rounded out our party, which meant we could once again try a bunch of things without the risk of being stranded with lots of leftovers of food we didn’t care for.

As it happens, we liked the food quite a lot. Their menu is not quite as large as Grand Szechuan’s on the Sichuan front but nothing disappointed and some things were quite good indeed.

First, a note on the space. The restaurant is located in a nondescript strip off the 36 and while not unattractive is also itself a somewhat nondescript space.We were there for late lunch on a weekday, and it wasn’t terribly busy, and this didn’t do the atmosphere too many favours. It’s a long narrow room, and if you’re not seated near the windows up front (as we were not) the lighting becomes a mix of gloomy and harsh (on which I pin partial fault for the crappy pictures below). Still, while the ambience at Tea House is superior, I have to agree that the food at Szechuan is better.

We once again ordered a mix of familiar dishes to compare against Grand Szechuan’s renditions and some dishes that Grand Szechuan does not have on their menu. Highlights came from both categories. For descriptions and notes on what we ate, click on a picture below to launch a slideshow. 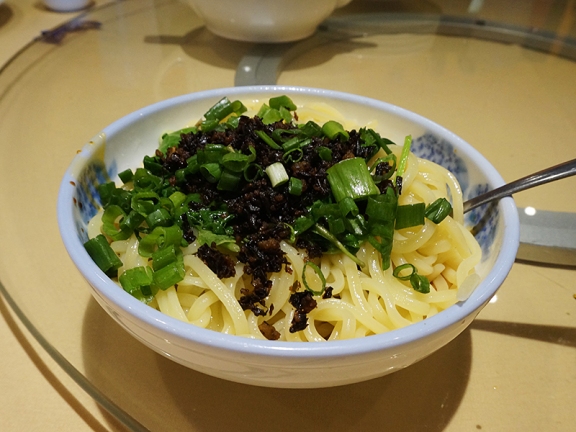 I only ate a bit of this but it was in a different style than most renditions in the Twin Cities: the meat was cooked much drier and there was more of a fermented flavour. Very nice and a good change-up from the version at Grand Szechuan.

I can’t say I liked the look of this with the mound of minced garlic but mixed in it was quite good.

As with the dumplings this was served with a prodigious amount of minced garlic and a big lashing of thick, sweet soy sauce on top of the meat which sat atop the chilli oil. 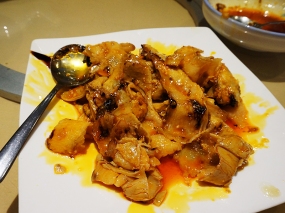 Mixed up it looked not very different from most other iterations of the dish. Not bad but the meat was too thinly sliced in my view.

I was expecting a version of the sliced and steamed fish available everywhere else but a whole steamed flounder emerged instead. It took forever to arrive but was perfectly cooked. The flesh was delicate and complemented well by the sauce and veg. Not cheap at $29.95 (I’m not sure if the price was marked on the menu).

This was a new dish for me and I quite liked it (the missus was not as much of a fan). The duck, as you can see, is sliced thinly and stir-fried with julienned peppers and lots of fresh ginger. 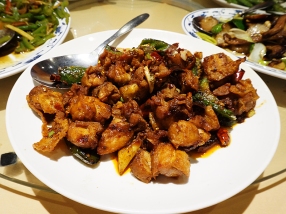 This ugly picture is of one of the highlights of the meal. The chicken was perfectly fried: crisp and crunchy on the outside and tender on the inside. And the flavours were nicely balanced.

This was another highlight. Thick slices of preserved pork belly, stir-fried with garlic shoots (presumably the leaves from green garlic). This may be an acquired taste though: the meat is a little chewy and more than a little salty from the preservation.

Everything was good but of the things we ate I’d particularly recommend the stir-fried chicken with roasted chillies and the preserved pork with garlic shoots.The default spice level is not particularly hot here, by the way (which is par for the course for the area). We hadn’t signaled that we wanted the things that should be hot to be really hot and they weren’t; on the other hand, they were far from mild as well.

All of this plus tax and tip came to $129. I have to note here that they’d automatically added a 20% gratuity. As there were only six of us (two of whom were small children) I asked why this was and our server said that it was their policy for all groups seated at the larger round tables. I felt it was a bit presumptuous, especially as the service was not particularly attentive and as the kitchen was rather slow—especially with the fish which only came out when we’d finished almost everything else and had begun to give up on it.

Still, these issues aside, we enjoyed the food enough to want to go back. It won’t replace Grand Szechuan in our rotation, as it’s not as good, on the whole, and is further away. But as it turns out, it’s not so very out of the way from our usual haunts for Korean and Indian grocery shopping or from Como Park, which we visit from time to time with the kids in the non-freezing months, and so we’ll be back to explore more of their menu.