Once upon a time Delhi had no Parsi restaurants (that I knew of or anyone talked about, at any rate), now we ate at two of them in the course of three days. The first was Sodabottleopenerwala, a meal, you may recall, I was unenthused by; the second was Rustom’s Parsi Bhonu. This was a much better meal in every way. Now, I should reiterate that I am in now way an authority on Parsi cuisine. I’ve eaten at a couple of Parsi/Irani places in Bombay and at the homes of friends but none of this has added up to a basis on which to opine in any confident way on the “authenticity” of the food served at these places. I do have some sense though of when food is made well, and the food at Rustom’s was superior, the distinction most marked in the dishes we ate at both meals.

Now, the first thing Rustom’s has going for it is that you don’t have to go to godforsaken Gurgaon to eat there (now, pedants will point out that there is a branch of Sodabottleopenerwala in Khan Market in Delhi as well but this is not convenient to the fraudulent comparison I am making). The second thing it has going for it is that you can combine eating there with a quick jaunt at the nearby Qutab Minar, a stop that tourists will all make but all too many Delhi-ites take for granted. The grounds and the monuments are in far better shape than they ever were and it’s really worth going. You could go first and walk around for a while to work up an appetite (as we did) or you could go later and work off the food.

If you go first, hop back into your car (or auto or whatever) and head off back towards Outer Ring Road. Rustom’s is on Aurobindo Marg just past the first or second traffic light after the Press Enclave turn-off, on the left, right next to Govardhan’s. You’ll have to take some fairly steep stairs to get up to the small dining room (the kitchen is on the ground floor). When you get to the dining room you’ll find a very different aesthetic than obtains at Sodabottleopenervala. Rather than Irani restaurant as theme park their designer has apparently gone for an understated dining room in an upper class Parsi home. It’s not that this isn’t contrived in its own way; it’s that it’s altogether more tasteful: your attention is directed to the food and it appears the restaurant’s is too. (The only cutesiness is in the look of the menu and in the presentation of the bill.)

With the memory of the Sodabottleopenervala lunch fresh in our minds we ordered many of the same dishes and found them, as I said above, to be far superior. The dhansak had greater depth and was served properly with not just the proper browned rice but also with the proper shammi kababs (which were missing at Sodabottleopenervala); the patra ni macchi did not have the more classic whole pomfret but the mint sauce was better and the fish was not stale; the macchi no patio did not have the vaguely North Indian curry flavour of Sodabottleopenervala’s prawn patio; and the bheeda par eedu actually was a bhindi/okra centered dish with a mass of crispy, spicy okra as the base and not the tomato curry with a bit of sliced okra that Sodabottleopenervala gave us (both may well be accepted variations but, again, we far preferred Rustom’s version). Of the other dishes, the kheema pattice was very well done: mashed potatoes around a spiced minced meat filling, fried to a non-greasy crisp; their caramel custard blew away Sodabottleopenevala’s lagan nu custard (which was bit too runny).

For pictures of the food see the slideshow below. 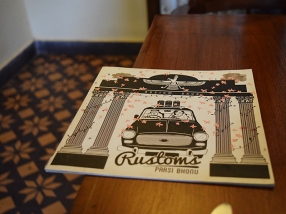 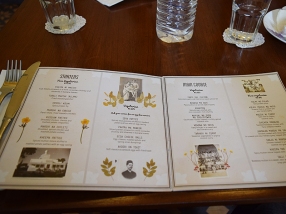 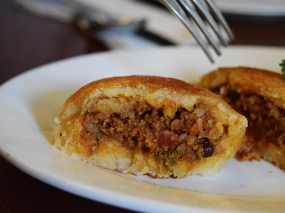 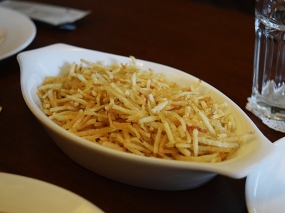 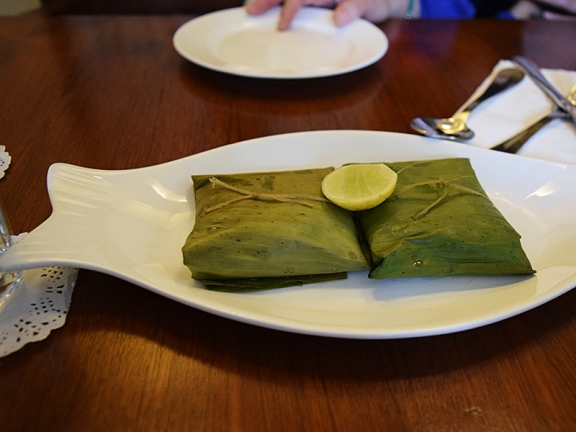 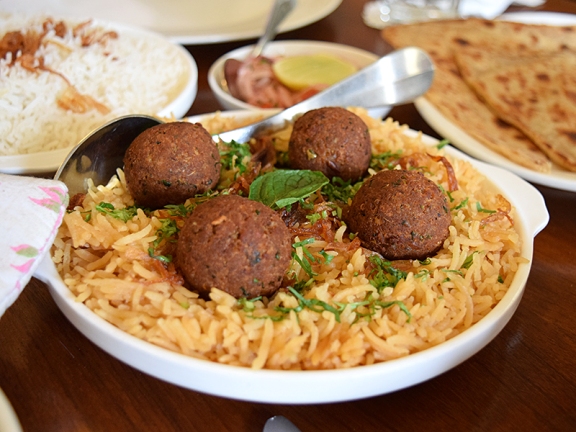 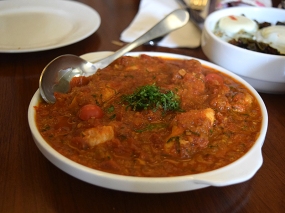 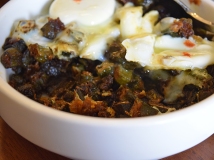 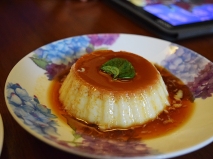 The service was very pleasant in general. We arrived very early by Delhi lunch standards (at 12.30) and as a result there was a little too much hovering (the small size of the dining room exacerbates this as well) before other diners began to show up past 1 pm. They did forget that we ordered the prawn patio and gave us the fish version instead, but when they realized it they packed a complimentary half portion of that as well along with our leftovers. Oh yes, portions were larger than Sodabottleopenervala and prices were lower: all of this came to just over Rs. 3000 with tax and tip or about $44 (with food for at least four people). I guess what I am saying is that if you are after good Parsi food (and not the tamasha) then there’s no contest: go to Rustom’s.

Having said that, on my next trip (which is going to be later this year) I’m actually going to go somewhere else entirely: to the dining hall at Anjuman, a Parsi guesthouse in Daryaganj, connected to a fire temple, that serves food to the general public as well if notified a day ahead. As that is Parsi food cooked primarily for Parsis I expect it’ll be better still.

Oh yes, if you go to Rustom’s website you’ll see that one of the partners in this restaurant is Chef Rahul Dua of Cafe Lota—one of our favourite stops on our last trip; we ate there twice again on this trip and I’ll have a report on those meals up next week.