After three reports on excellent Cantonese outings in Hong Kong I now come to the first of two slightly underwhelming meals. As it happens we came to the meal for pretty much the same reason that this review comes when it does: as a break. It was our second night in Hong Kong and we’d already eaten four meals in a row that featured relatively mild flavours, excellent though they were (at Crystal Jade, Yat Lok, Crystal Jade again and at Lei Garden), and had another similar lunch planned for the next day. And so for our second dinner we decided we’d do a meal centered on more robust fare. We couldn’t get into any of the better-reviewed Sichuan places on short notice (though we did get into one of those the next night—more on that next week) but were able to snag a table at one of the three locations of Under Bridge Spicy Crab in the Wan Chai neighbourhood. Herewith our experience.

Not only does Under Bridge Spicy Crab have three locations, these locations are literally next to and around the corner from each other. I guess they’ve decided not to damage their branding by opening somewhere where they wouldn’t be under a bridge. It started out as a street stall some 25 years ago before becoming a mini-institution in the city, apparently beloved of locals and tourists alike. To the latter point, it’s also Anthony Bourdain-approved—and lest you detect any disdain in my reference to it being tourist or Bourdain-approved, please keep in mind that all of this is true of Yat Lok as well. The restaurants are in the typhoon shelter crab genre: places that have their origins in traditional shelters in which fishermen would wait out typhoons and eat simple seafood dishes while doing so. From all accounts, what makes Under Bridge Spicy Crab stand out is their signature spicy chilli-garlic sauce. (Crab is just one thing in their large menu, by the way—there are plenty of other things to eat as well.)

This crab can be got in various sizes—and I can tell you from our experience and from listening to the tables around us—that the reports you will read of servers attempting shameless upsells of crab size are entirely true. We had to battle our server down to what seemed like a likely size for two. The sauce can also be got at various heat levels. And just in case you think spicy in Hong Kong can’t be that hot, let me tell you that we got our crab at the medium level and it was pretty, pretty hot. We got the HKD 580 small crab for two—it was not a problem for two great greedy guts like ourselves to finish it but if you’re in a party of two I’d recommend getting the smallest size (HKD 480 while we were there) and maybe getting another seafood dish alongside. The crab is good but it can get a bit monotonous. And yes, that’s where the “slightly underwhelming” part comes in.

The crab is good and the chilli garlic “sauce” (it’s dry) is good but it was a bit one-dimensional. We got a clam soup alongside, some green beans and some boiled shrimp for the boys, but everything sort of got obliterated by the crab. Maybe the thing to do is to start out with more delicate dishes and build to the crab. We actually tried to do that but, perhaps because we were eating late, they were out of the other things that caught our eye (razor clams and scallops) and we were a little overwhelmed by the large picture menu—we couldn’t tell what might be good or bad choices. I guess what I’m saying is that our slightly underwhelming experience might well have been our fault. That said, as enjoyable as the crab itself was it didn’t rock our world like the fabulous chilli crab in Singapore or even the Southwestern Indian butter-pepper-garlic preparation. Your mileage may vary.

And if you eat at the Lockhart Road outpost your experience may also vary by which floor they put you on. That location is divided between three floors. The ground floor, where one enters, is not attractive but has a charm—but it was full; we were sent up to the second floor, which looked more attractive but was also full; we were then sent up to the third floor, which was altogether more pokey: and our table was right by a pile of empty beer boxes on the floor and quite close to the small bathroom and the table next to us. There were more tables in the back on that level and I’m not sure if they’re more attractive propositions. Anyway, on to the food! 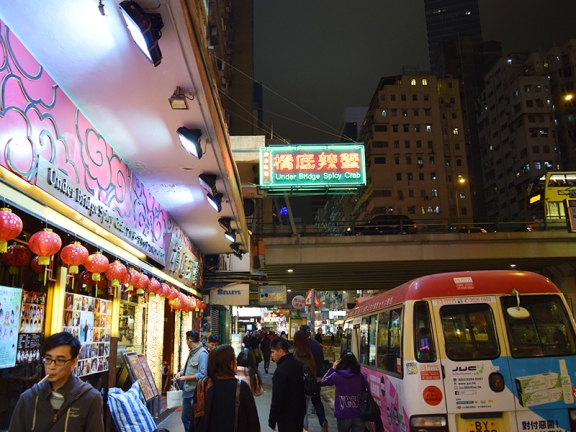 The bridge it’s under.

Unlike the IFC, this is the bustling Hong Kong of the movies. 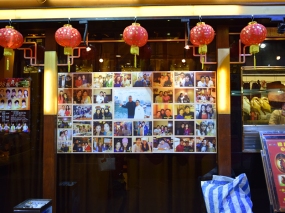 Happy customers including one very famous one.

The ground floor is not fancy but it has a bustling charm.

But we were going up the stairs…

Past the first floor which looked more stylish…

To the top floor, which did not. 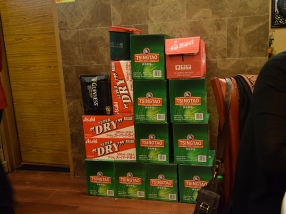 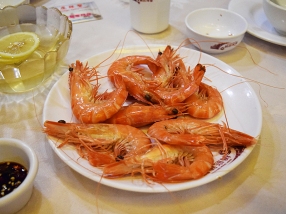 The boys inhaled these with rice (after we peeled them, of course—the shrimp, not the boys).

…and lots of ginger. The broth was very nice.

The beans were decent too. 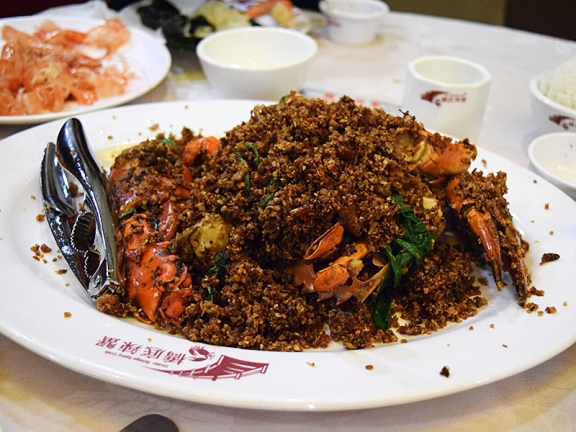 Here comes the crab. It’s under that mound of garlic. 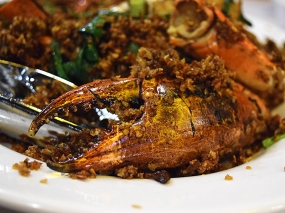 There’s most of the rest of it.

Which we did quite a number on.

No crab was left behind.

All of this came to $133 US. Which, considering we ate some high quality seafood, might not seem too outrageous, but felt like far more than the overall experience merited. It was 1.5x the price of our fabulous dim sum at Lei Garden that morning, for instance, and I couldn’t help feeling that our money would have been better spent/saved, and our palates better pleased elsewhere. If we lived in Hong Kong or were there on a much longer trip I’d likely feel different but I don’t think it’s a must-do if you’re there for a very short while, as we were. Once again, your mileage may vary. If you’ve been I’d be interested to read your take on it too.

Oh, I should say that attempted crazy crab upsell aside, service here was perhaps the friendliest we encountered in Hong Kong. There was an older gent in particular who was very taken with the boys and hung around close to us and kept us plied with wet wipes, napkins and water.