Back in late November I’d posted an annotated list of regional Indian cookbooks available in English. This post was quite widely read, having been shared by a large number of people online. In the wake of that post friends and others wrote in to suggest other regional cookbooks that I had either missed/forgotten the first time around or that I had not known about then. I’d originally thought I’d post this second list in December but as anyone who actually follows my blog knows, I am very bad at follow-ups—some people are still waiting for the annotated list of 1960s Bombay films I’d promised back in September.  Even with these additions this remains an incomplete list and I hope to receive even more suggestions and recommendations. If you’ve made some in the past and don’t see those reflected in this second list, please don’t be offended. This is a list that I have to vouch for and so for books that I don’t actually have on my own shelves I am only comfortable listing those recommended to me by people I can also vouch for. But please know that I will do my best to track down your suggestions for myself and they may yet appear in further entries in this series.

Almost all the purchasing links are once again affiliate links to Amazon (meaning I will make a few cents if you purchase any of these books). As I said last time, as much as I love to support indie bookstores, for titles published outside the US Amazon remains our best bet.

To this excellent list I here add the following:

The Suriani Kitchen, Lathika George. George’s book was first published in the US in 2009 and was reprinted by Penguin India in 2017. It is ostensibly a cookbook that focuses on the food of the Syrian Christian community of Kerala. I say ostensibly because a number of the recipes—for example, kadala karri (p. 71) or avial (p. 54) cross community lines. You can think of this book in some ways as an expanded version of Flavours of the Spice Coast. Unlike that book—as someone noted on Twitter back in November—George’s book lists beef recipes by name and also includes a number of pork recipes. The book also contains some historical background on the Syrian Christians of Kerala. I am generally not a fan of the idea of people trusting too much to broader historical/cultural information presented in cookbooks but for the genre it’s done well.

Spice & Kosher, Dr. Essie Sassoon, Bala Menon, Kenny Salem. This book, published in Canada in 2013, has the unfortunate subtitle, “Exotic Cuisine of the Cochin Jews” but is nonetheless a fascinating account of the food of the once prominent but now very small Jewish community of Kerala, centered in Cochin. As with George’s book the recipes here are a mix of actual Jewish dishes and broader Kerala dishes eaten by Jews in Kerala; also present are dishes cooked by Jews from Cochin who now live elsewhere—Salmon Miso (p. 52), for example. It too contains a number of beef recipes. Overlaps aside, there are things here that you won’t find in other books on Kerala cuisine and it seems essential for that reason. The same caveats as with the George book apply to the historical/cultural sections here. They are done well but this is a cookbook.

Tamil Nadu was represented in the first edition of the list by Meenaksh Ammal’s Tamil-Brahmin classic, Samaithu Paar and by The Bangala Table, the Chettinad cookbook of The Bangala, a heritage hotel. To this short list I now add: 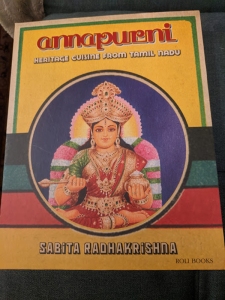 Annapurni: Heritage Cuisine from Tamil Nadu, Sabita Radhakrishna This book was highly recommended by a few friends and others on Twitter and I now in turn recommend it highly. From the funky design of the book to its attention to the cuisines of a number of different Tamil communities, this book is a delight. Not one section of this book—whether on Mudaliars and Vellalar Christians, Anglo Indians, Tamil Muslims, Nattukottai Chettiars or the Naidus and Konganadus—is vegetarian and even Tamil friends have remarked on how much in this book was new to them. If you buy only one book from this edition of this list make it this one.

The first list included the following books for Karnataka: The Essential Kodava Cookbook, C.B Muthamma, P. Gangamma Bopanna and The Udupi Kitchen, Malati Srinivasan, Geetha Rao. I have one more to add to this list:

Romancing the Chilli: Chillies and Chutneys, Sunita Gogate, Sunil Jalihal. I recommend this book with a lot of reservations. It’s an odd book. The first half is taken up by a rather uneven—to put it nicely—account of the history of chillies. It’s clearly a labour of love on the part of the authors but the information is mostly unreliable, dependent as it is on Wikipedia articles and other non-primary sources. I would suggest that if you buy this book you not bother with this stuff at all. Instead, turn straight to page 90 where begins a series of recipes for chutneys from North Karnataka that you will likely not find in other books.

There were a large number of books from the state in the first edition of the list.

To this I add one more title.

The East Indian Kitchen, Michael Swamy. As with Spice and Kosher, Swamy’s book focuses on a community not very well-known either outside or inside India—it’s probably fair to say that there’s not much of a sense in India outside of Bombay of who the East Indians are. The appellation refers to the first groups of converts to Christianity in the 16th century when the islands that later became Bombay became Portuguese possessions. These Christians adopted the appellation “East Indian” in the 19th century to distinguish themselves from Christians from Goa, Mangalore etc. This book, which includes recipes for Cutlets of Sheep’s Tongue (p. 46) and Sopa de Lentila com Toucinho (p. 53; call it Channa Dal with Bacon), presents a cuisine that, as the book’s subtitle puts it, is “Maharashtrian-Portuguese Fusion Cuisine”.

There were no Bihari cookbooks in the first list and at the end I’d included Bihar in a list of states and regions that I hoped to find books from. A few people recommended this book:

The Bhojpuri Kitchen, Pallavi Nigam Sahay. Almost everyone who recommended the book had reservations about the title. I suspect there’s a better book to be written on the cuisines of Bihar with more granular attention to sub-region and community (a la Annapurni) but until then this one will have to do. It is a mix of more or less traditional recipes and more ersatz ones by the author who is not herself Bihari but married into a Bihari family. 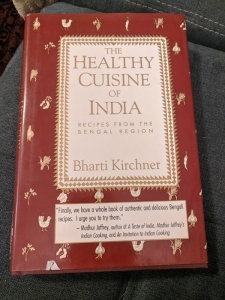 The Healthy Cuisine of India, Bharati Kirchner. Kirchner, whose first cookbook this was, is an anomalous figure in the world of Indian American cookbooks. A novelist, she is mostly forgotten now as a writer of cookbooks (see my own failure to put this book in the first edition of the list) but in many ways she anticipated later developments. This book—which despite its title focuses on the cuisine of Kirchner’s native Bengal—was one of the earliest regional Indian cookbooks published in the US, in the early 1990s. Her next book, The Indian Inspired Cookbook anticipated later Indian American cookbooks such as Suvir Saran’s American Masala, Nik Sharma’s Season (and also Priya Krishna’s Indian (-ish)—and in many ways it is more audacious than any of them. I might write a review of that book separately at some point—I only just read it for the first time a few weeks ago—but for now recommend Kirchner’s Bengali cookbook even though I don’t tend to think of my people’s food as particularly healthy. It too is a mix of traditional dishes and some organic departures from them.

Okay, that’s it for this first sequel. I do have on my radar other books recommended in response to the first list and I invite you to add more to my virtual pile or to reiterate recommendations for essential books that may be missing. I’m still looking for books on the foods of Rajasthan, Madhya Pradesh and Orissa and also on Pahari food. It also occurs to me that I don’t have any Punjabi books on my list or books on Awadhi or other cuisines of Uttar Pradesh. And I also think we need more granular books on states like Bengal and Bihar that have a great deal of regional diversity; and a stand-alone book on Assamese food. If good examples exist, please point me to them. If not, please join me in asking Indian publishers to commission some.

3 thoughts on “An Incomplete Guide to Regional Indian Cookbooks, Part 2”