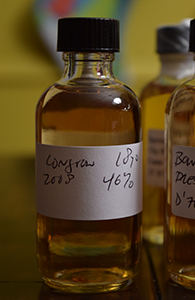 I’ve previously reviewed a Longrow 18 released in 2011. This one, released in 2008, was the first of the Longrow 18s, and along with the Longrow CV, which was also first released in 2008, filled out the range of Springbank’s double-distilled, heavily-peated malt (the 10 yo and 14 yo had already been released in prior years). It was very well received on release; this is my first time drinking it and I’m very interested to see what its like.

Nose: Lemon and minerally, ashy peat. Other fruit as well below the lemon: makrut lime peel, some kiwi, some grapefruit and also some tart-sweet apple. Quite a bit of salt too along with expanding iodine and olive brine. The classic Springbank leathery/wet sackcloth note is here too. Just lovely. Gets sweeter as it sits with some vanilla popping out as well to join the ever more fragrant citrus. With a lot more time there’s an almondy note as well. Let’s see if water bring out anything new. Well, if anything it seems to intensify that nutty note.
Palate: Ashy smoke as promised by the nose but not quite as much of the fruit. Rather straightforward here in fact with an ashy entry leading to mild sweet notes (wet stones/earth) and hints of the lemon from the nose. A few sips in there’s a slight bitterness that adds an interesting complexity: somewhere between unripe lime zest and something rooty. Water brings out more of the lemon and ties everything together really nicely.

Finish: Long. The smoke expands and picks up some pepper. The lemon emerges again. With time the lemon becomes quite prominent as it slowly fades and that leathery note begins to show up as well. Well after the last swallow my mouth seems to be coated with dry smoke. As on the palate with water.

Comments: This reminded me of some milder Caol Ilas in some ways (yes, I know Longrow is usually peated to a higher level than Caol Ila, but that’s just a number). In other ways, it’s very quintessentially Springbank. I liked it a bit more than the 2011 release which was more austere all around but this is very much in the same ballpark.