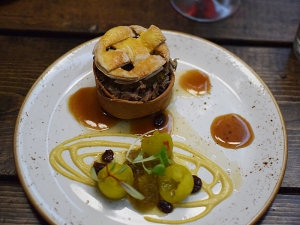 Heirloom opened in St. Paul late last year and while it wouldn’t be accurate to say that it has set the cities on fire it has already acquired a strong reputation. The chef, Wyatt Evans is another W.A. Frost graduate (like Russell Klein of Meritage). His new restaurant offers what it calls “modern farmhouse cuisine”. I’m not entirely sure about the farmhouse part but the restaurant’s general approach—lots of pickled veg, foams, crumbles and powders on top of things, an emphasis on seasonal ingredients, bread you pay for, a beer list etc.—certainly is in line with contemporary trends, as is its aesthetic and general air of informality. It’s a large, bright restaurant, with lots of wood and glass, an active bar area with its own menu, and lots of room between tables: a very nice space and not too loud—at least not in the back where we were seated. It’s true that it’s located right off a street with the name Cretin Avenue, but you can’t have everything.

The menu is divided into three sections plus cheese and dessert and this led us to believe that each course would likely be somewhat small. Accordingly, we decided to each get one dish from each section (there were four of us eating). In practice, it turned out that the first and second courses were not in fact particularly small. Two courses per person with a couple of shared things might be enough for most people. Certainly three courses each plus dessert felt like too much for most of us.

Right off the bat we got an order of the bread and butter ($3) for the table. The butter is churned in-house, we were told, and when I asked if the bread was also made in-house our waiter proudly informed us that they even mill the flour themselves. I therefore asked if they also milk the cows themselves for the butter, and he said they do not. A curious lack of commitment if you ask me. Anyway, both the bread and butter were fine but nothing special.

Our order of the shared “Interesting Vegetables” we’d expected to be served with the other second course dishes but when it didn’t arrive we thought it would show up with the mains. That didn’t happen either and so we had to ask about it. It showed up a little later. A nice composed salad of root vegetables etc. topped with an utterly pointless foam made from the whey left over from the churning of their butter.

There’s not much to say about the desserts; all were competent, none particularly did anything for us; the carrot cake was probably the pick of the three but it wasn’t anything to get excited about. On this basis I’d suggest trying the cheese selection instead. 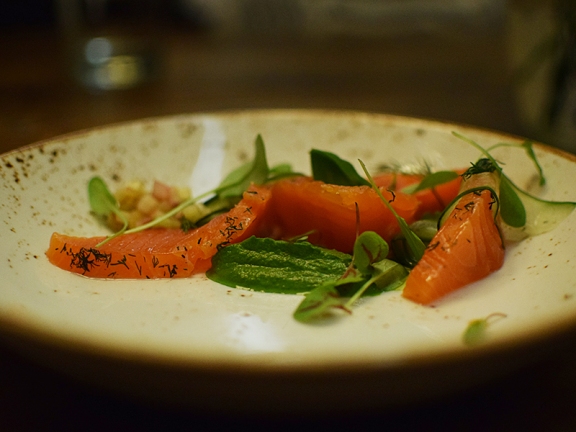 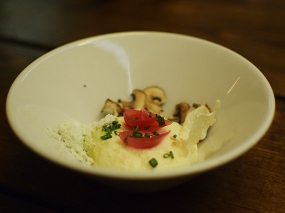 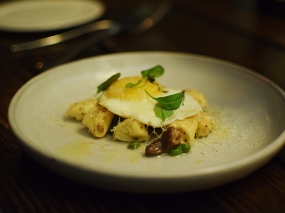 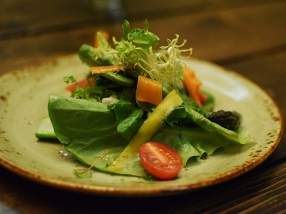 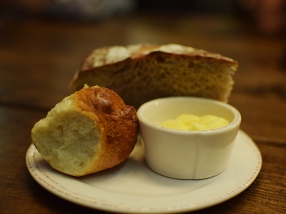 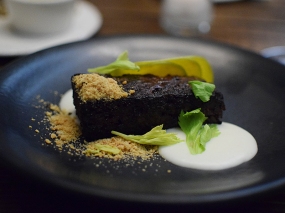 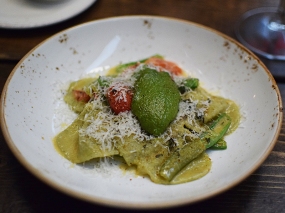 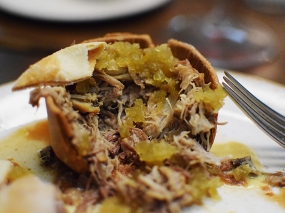 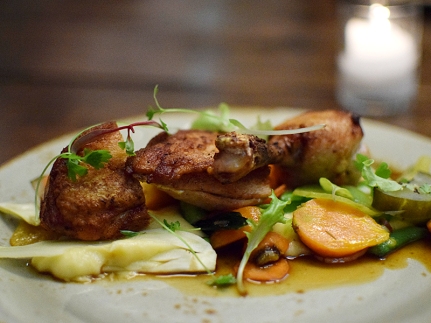 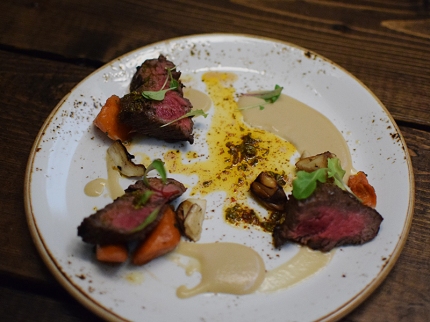 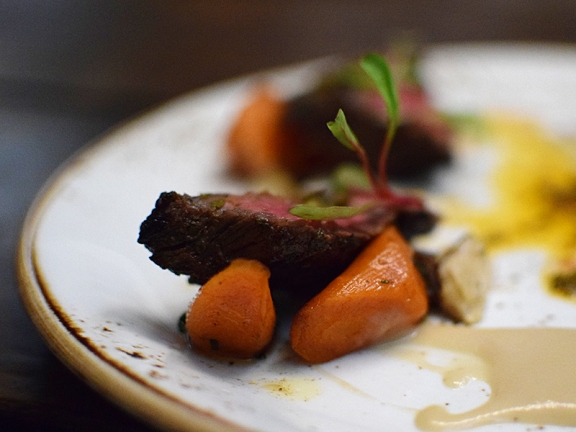 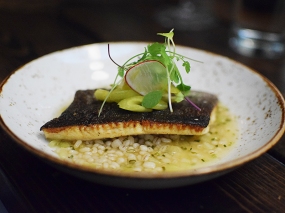 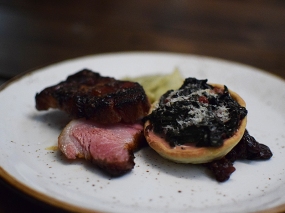 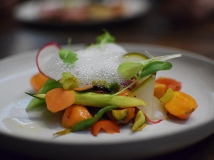 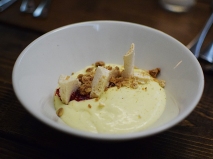 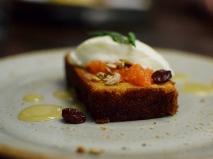 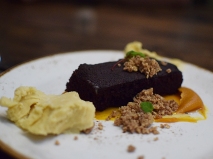 We also shared a bottle of the 2013 Franck Peillot Vin du Bugey Mondeuse, at $44, priced very fairly, just about 2x original retail cost (and yes, when I ordered it our waiter told us it was the chef and owner’s favourite wine on the list). Service was mostly fine—a couple of things went to the wrong people on arrival, the “Interesting Veg” seemed to fall of their radar, and our waiter, as hinted above, perhaps let his enthusiasm go a bit too far on occasion (but you might well find that charming if you’re not an asshole like me). And, oh yes, we really liked a lot of the crockery.

An 18% service charge is included in the bill, which is fine. They leave the tip line open on the receipt in case you want to go higher but we weren’t in the mood to do the calculation to figure out how much more to leave to go up to 20%. I guess that’s an acceptable trade-off for them against the chance of people tipping closer to 15% (thought we also wondered about less attentive people accidentally over-tipping very dramatically).

All in it came to just about $75/head. And frankly, that seems a bit high for the quality of what we ate. Nothing was close to being bad but nothing really stood out either as something I’d want to eat again very soon. And for a menu this small (four to five options per course) there were a few too many execution issues on a few too many plates. And the desserts were somewhat pedestrian.

I’m not saying that I wouldn’t want to eat here again (I would, though I’m not in any rush) but that I don’t know that I’d want to spend $75/head here again. In some ways the most interesting parts of the meal felt a bit like Heyday-lite, but not as good as our meals there and a bit more expensive. Then again, with one course fewer and beer instead of wine you could lower the bill a bit. If I lived in the neighbourhood (though hopefully not on Cretin Avenue) I could see stopping by more often for small bites and a drink at the bar. And maybe that’s the best way to enjoy Heirloom right now. Then again, once they’ve really hit their stride and found more of an identity it could be a very different story.