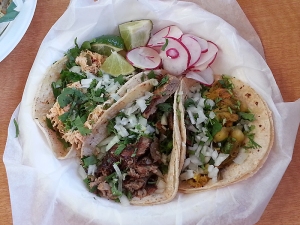 Taqueria Los Ocampo was one of the first places we ate Mexican food at in the Twin Cities, shortly after our arrival in Minnesota in 2007. To be exact, it was the third place. The first was the late, lamented La Sirena Gorda in the Midtown Market (I can still recall the taste memory of their octopus tacos) and the second was the food counter at Bymore Meats, also at the Midtown Market—there I was partial to their goat tacos. The outpost of Los Ocampo in the Midtown Market eventually seduced us as well, but the quality of the toppings was never quite as good as at the other two places. But we spread our custom generously, picking a taco or two from their counter to eat alongside things from the other two places. After the demise of La Sirena Gorda and Bymore Meats we took our appetites across the street to their larger, stand-alone restaurant on the corner of Chicago and Lake and discovered that the quality was much better there. Throw in the fact that they’re open very late into the night on weekends, and in our pre-parent days this branch of Los Ocampo was thus often where we ate after a show or a late movie in the Cities.

Los Ocampo itself arrived in the Twin Cities not too long before us, in 2003. This Chicago/Lake branch was actually their fourth location—the Midtown Market counter actually preceded it. We’d also eaten at their original St. Paul location after farmer’s market shopping on a few occasions—but I’m not sure if that was the original or if it’s still there. In the intervening years they’ve opened fancier, full-bar sit-down locations in St. Paul, most recently opposite Big Daddy’s BBQ on University. We haven’t eaten at the newer locations yet and indeed we hadn’t eaten at any branch of Los Ocampo in a while. This is largely because in recent years we’ve shopped less and less at the Midtown Market and partly because Chicago-Lake  Liquors, with whom this branch shares a parking lot, no longer has a vast selection of single malts at ridiculously low prices. And, of course, we acquired two small children and found ourselves less and less in need of late-night food after shows or movies in the Cities.

Even though we prefered Los Ocampo, of late the convenience of Maya Cuisine (more conveniently located near our Korean and Indian food shopping haunts) trumped the greater and funkier variety of meats on offer at Los Ocampo. Then La Huasteca (in the glorious Jose Gonzalez era) took over all our Mexican eating in the Cities. And so it came to be that we hadn’t eaten at Los Ocampo in more than a year. Now, of course, La Huasteca is under new ownership and so when we were looking around for a bite to eat earlier this week after a run up to Dong Yang and Pooja Groceries for food shopping, we decided to stop at Los Ocampo again on the way home. It was a quick meal, and I didn’t have my camera with me, and so a very quick report.

If you haven’t been it’s a very casual place. You order at a counter—everything is clearly listed, most with pictures—they give you a receipt with a number and when your order is ready a server brings it to your table. Most things come with some kind of salsa but you can go up to the service counter and ask for other salsas and their roasted jalapenos too. (Your receipt also contains the codes you’ll need to get into the restrooms.) Oh, and it’s very cheap.

The missus got what she always used to get: an order of their huarache de costilla (with pork ribs). My plan was to get three tacos. Choosing the toppings for the tacos is always difficult. Their lengua (tongue) and al pastor are very good as are their tinga de pollo/res (chicken or beef in a chipotle sauce) and their chorizo. On this occasion though I plumped for three of my favourites: carnitas, pollo a la Mexicana (shredded chicken that is as hot as it is innocuous-looking) and chicharron verde. Alas, they were out of the chicharron verde (which has always been the case more often than not); they did have the chicharron prensado (less hot, more smoky in a tangy red sauce with some chipotle action involved) and I impulsively decided to get it on a sope instead. In order to feel virtuous I went vegetarian for my third taco, getting it with flor de calabaza (pumpkin flower).

Pictures (with some detail in the captions)

This door is usually closed.

And you have to enter through the parking lot.

The counter with pictures of most of the menu items.

It’s a bright space with some gestures towards culturally specific decor.

You can get it with beef or pork ribs. Not a good idea to get it if eating late at night though in our past experience, as the meat often seemed to have sat for a while and would be dry.

Their sopes and huaraches are really very good. 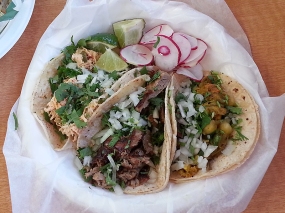 As are their tacos, usually. 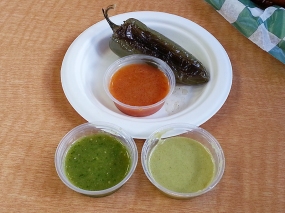 The ribs were very moist and tasty. 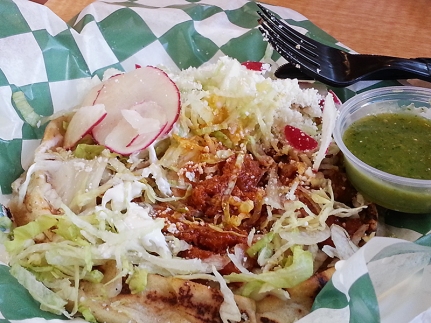 There’s the chicharron prensado under the cheese and crema. This was very good, but I seem to recall a more generous portion of the meat in the past.

Quite good. Theoretically this is not available as a taco topping but they’ll give it to you for a dollar extra if you ask.

As I said, this looks innocuous but packs a surprising kick. I have to say this was drier and not as good as it has been in the past. 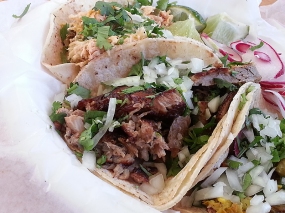 The carnitas however was excellent

Especially lashed with some of the red salsa. 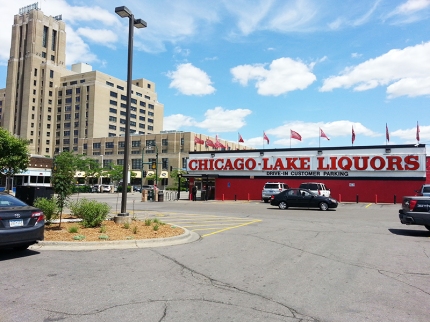 A view of the Midtown Market across the street and Chicago-Lake Liquors across the parking lot. I couldn’t resist stopping in at the latter for old times’ sake but the single malt section was very sad.

Not the best meal, on the whole, we’ve ever had there but at the price ($20 plus tip) it’s hard to complain. And I’d still take their tacos over those at Maya any day. I should say that on other occasions we’ve also really liked their posole and their menudo. Their tortas are very good too. I can’t remember if we’ve ever had their tamales (those are very good at Maya).

We’ll try to stop by more often and I do also need to get to more of the Mexican standbys on Lake Street (your Pinedas and La Haciendas).

One thought on “Tacos etc. at Los Ocampo (Minneapolis)”