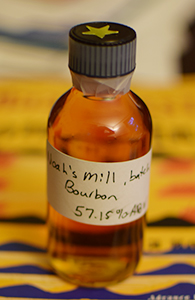 I got this sample from Michael K. of Diving for Pearls. We were supposed to simul-review it before tree pollen, or whatever the hell it was, knocked my nose out for almost three weeks. Well, I’m back now and here is my review.

Noah’s Mill, in case you’re wondering, is not a distillery; as with so many bourbon brands, it is a sourced whiskey. It is produced, which is not to say distilled, by Kentucky Bourbon Distillers (KBD) who also put out the Rowan Creek and Willett brands (among others), and who have recently re-started the Willett distillery (I’ve reviewed their promising 2 yo rye). I’m not entirely clear on where the whiskey in Noah’s Mill comes from. In his review Michael mentions MGP but Sku (and others) note that they source from one or more Kentucky distilleries. The age is likewise unclear. Once upon a time Noah’s Mill was a 15 yo bourbon but now contains much younger whiskey (along with, so it is said, much older whiskey). It still has a strong reputation and this batch in particular has received rave reviews from some (including the formidable Bourbon Truth who had it as his 2015 whiskey of the year). Michael was not overly impressed with it. I’m curious to see what I make of it.

Nose: Starts out a bit dusty and closed but then a big whack of oak comes wafting out, followed closely by some red fruit (cherry, a bit of plum); some cinnamon and rye bread too. Gets more peppery (chilli peppers) and vegetal as it sits. With more time there’s orange peel and a bit of honey too. Fruitier and stickier with water but the wood verges toward pencil shavings.

Palate: Leads with the wood—some of the sweet fruit comes in behind it but is overtaken quickly by the capsaicin note. More tannic on the second sip but not astringent. Very drinkable at full strength. Gets more and more peppery as it goes (cracked black pepper now). With more time the late-appearing orange peel from the nose begins to show up here too. With a lot more time the oak gets more pronounced again but it’s got a sweetness to it. Spicier with water (cinnamon, a hint of cumin) and the wood is sharper.

Finish: Long. Woody, spicy, peppery. A hint of citrus as well. As on the palate, it gets oakier as it goes. Spicier here too with water but less woody.

Comments: I’ll say this for it: it’s not a cookie-cutter bourbon. I really liked the development on the nose and the pepperiness on the palate; I just wish the oak were a bit less assertive. Still, even though it doesn’t usually take too much oak to overpower my single malt-conditioned palate, I didn’t object to it too much here. And if I’d found all the fruit on the palate that Bourbon Truth did I’d go a lot higher too. If I saw this around for $50 I’d certainly get a bottle. Alas, as with all batch released, sourced whiskey, there’s no telling if other batches will be very similar. If you have a bottle, this is one to drink slowly to catch its nuances: I liked it more the longer it sat in the glass. I preferred it without water.

Thanks to Michael for the sample!