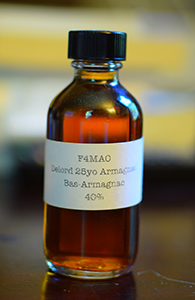 Last week I posted my first Armagnac review, of the 30 yo Domaine de Baraillon bottled for K&L in California. That one is long gone. I remarked that at $80 a bottle it had seemed like an unthinkable value for someone like me who is reeling from the sharp increase in single malt whisky prices over the last few years. (Truth be told, it has been a very, very long time since any officially bottled 30 yo single malt whisky has been available for less than $100, leave alone any that were actually of high quality.) Well, today’s Armagnac is slightly younger, but only slightly at 25 years old, but it is an even better value on the face of it: it is available for close to $60 in a number of markets. Unlike the de Baraillon, it’s also widely and seemingly continuously available. As such I am hoping that I will like it a lot too.

Given the fact that they have a very snazzy website Delord is obviously not a small-scale farm producer. I have to admit I have a knee-jerk inclination to favour the idea of farm producers when it comes to Calvados and Armagnac—I have to constantly remind myself that almost no Scottish distillery fits that bill. Anyway, let’s see what this is like.

Nose: Rich, sweet notes of raisin and plum with some cinnamon and oak behind; something leathery too maybe. There’s not much change to speak of with time (the oak gets a little polished maybe) but also no drop-off.

Palate: Oakier here and less sweet but otherwise more or less as promised by the nose. The mouthfeel is a little too thin but it’s very drinkable indeed. As it sits it’s a little spicier and just a touch more tannic but nothing even close to offensive.

Finish: Medium. The oak hangs around the longest, getting a little spicier still as it goes with some clove joining the cinnamon..

Comments: This is very mild and very nice. I don’t know that it checks too many “older spirit” boxes for me, especially on the palate, and it’s not particularly complex but, on the other hand, it doesn’t have any flaws and is quite well balanced. The nose is fruitier, and will appeal to drinkers of sherried malts and bourbon alike; the palate is oakier (though never too oaky) and will probably appeal more to bourbon drinkers. All in all, this seems to be in the sweet spot between bourbon and sherried whisky. Definitely worth the price, I’d say.