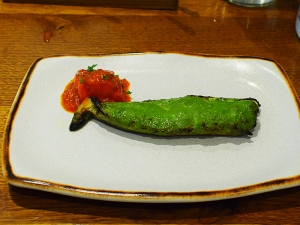 A quick report today on a meal at Trishna, one of London’s higher-rated Indian restaurants; in fact, it has a Michelin star. I’ve always been a little suspicious of Trishna’s acclaim, as it is affiliated with a Bombay restaurant of the same name, an acclaimed coastal seafood restaurant whose far greater acclaim than its peers among foreign visitors has long been a mystery to my food-obsessed friends in the city. Nonetheless, I was going to eat one fancy Indian meal on this London trip and when I was figuring out where to go, the facts that they offer an attractive four course lunch tasting menu and that they are located very close to the Cadenhead’s whisky shop overcame my irrational bias. And so off to Marylebone I went (in an expensive and inefficient cab—I learned my lesson and got an Oyster card for the Underground right after lunch). And I was quite glad I did.

The restaurant is unassuming from the outside, and inside features a decor that simultaneously evokes colonial clubs and postcolonial kitsch. The walls are lined with vintage ads for tourism to India, many from Air India. There are a couple of dining rooms, one brighter than the other and some outdoor seating as well. They were not close to being full but were doing steady business on a Tuesday afternoon.

I did indeed order the lunch tasting menu—there are a number of these, by the way, in addition to the carte; I got the “Taste of Trishna” four course tasting menu (which turned out to be a lot more food than I was expecting). You get choices for each course, and these were mine:

3. Lamb Nariyal Masala (curry leaf, coconut, coastal spices): This was very good indeed and could have been a meal in itself as there was quite a bit of the lamb and it came with a goodly portion of Hyderabadi dal and lovely baby potatoes that had been boiled and fried with a bit of masala, rice and some stuffed kulcha (at least I think it was a kulcha). The lamb was tender and packed quite a bit of heat. The dal for some reason was topped with a fried Scotch bonnet pepper.

4. Double ka Meetha (bread & butter pudding, fennel, poppy seed, black pepper): Also quite good. The thickened milk was rich without being cloying and had been spiced with a light hand. It was served attractively with a flower on top; under the flower was some sort of berry compote.

There were also papads/pappadum with two nice chutneys to start and petit fours to end (I particularly liked the mini cardamom biscuit/nankhatai).

For pictures of the restaurant and the food, click on an image below to launch a slideshow. 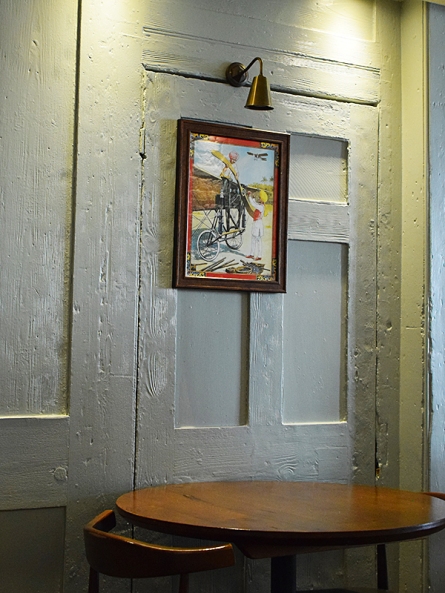 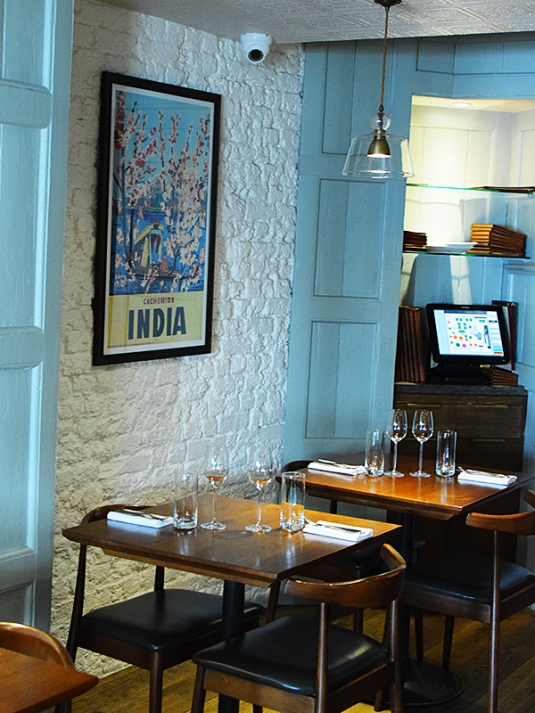 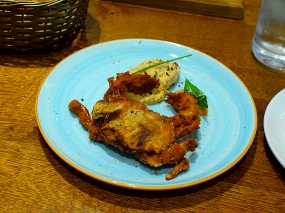 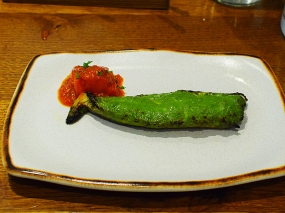 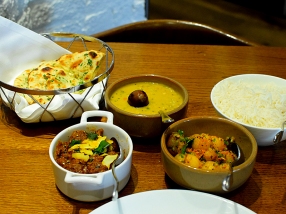 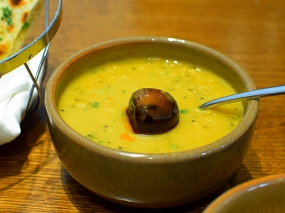 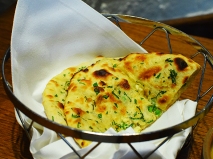 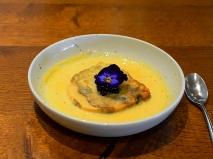 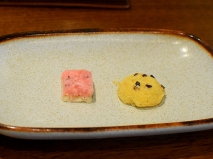 Service was attentive and professional, if a tad hectic at times. All of this plus a bottle of still water came to £43 with the service charge. It’s a lot of money for lunch but the food was quite good. And frankly two people who’d had a decent breakfast earlier in the day could have eaten that single lunch—I couldn’t finish it all. I don’t know how they’d look upon two people doing that, however. Anyway, a good splurge, and far better than any Indian restaurant I’ve eaten at recently in the US, but nothing so very special either. It’s been seven years, but I remember being more impressed by our lunch at Quilon the last time I was in London, a restaurant similarly focused on southern coastal cuisines. Still, I’d recommend it if you’re looking for a high-end Indian meal.