Hedone is located in Chiswick, a long tube ride from central London. A lot is made of this incongruity in some quarters; and even for someone like me who doesn’t have much of a sense of the geography of London, physical or cultural, the setting does seem unlikely: it’s not just that it’s far away from the center of the city but also that Chiswick High Street, once you get to it (after getting off at a very unprepossessing train station), doesn’t really seem like the kind of place where you’d find a Michelin starred restaurant that is one of the most innovative in England. Then again, Hedone is far from the only restaurant of its ilk in the world to be located in unlikely surroundings and it’s probably very likely that lower rents in Chiswick allow for their food to be sold at lower prices than would be possible in hipper locations. It’s not that a meal at Hedone is cheap—I hasten to add—but it’s both extremely good and clearly made from top-notch ingredients. It was a superb meal—the best I ate on my short trip—and, while not cheap, it felt like a good value for what I was eating (though the post-Brexit exchange rate helped).

I was there for lunch on a Friday. The restaurant is only open for lunch on Fridays and Saturdays (dinners: Tuesdays through Saturdays) and if my experience is anything to go by, lunch on Friday may be the easiest way to dine there. I was one of only two parties at lunch. My reservation—which involved a credit card hold—was for 12.30 but because I wasn’t paying attention I got there right as they opened at noon. They were kind enough to seat me right away, making the rest of my afternoon less cramped—it’s possibly though that this contributed to an odd situation at the end of my meal (more on this later).

I do wish that they had seated me at a table and not at the counter. The restaurant has a small dining room to the left when you enter and seven or eight seats overlooking an open kitchen at right. I suspect that it’s their policy to shunt all solo diners to the counter but given the fact that they had to know that their tables were not going to be taken it would have been nice if they’d offered the choice. I say this because of the experience at the counter which I found a little alienating. Unlike at The Clove Club, where I was seated at the bar alongside other solo diners and across from two very personable bartenders, I was alone at Hedone’s bar and none of the chefs in the open kitchen had the time or the inclination for interaction. As a result it felt like I was in close proximity to people doing their work but that we weren’t supposed to be acknowledging each other’s presence. I’m not saying that they should have been talking to me—they were clearly all very busy—but that I felt more lonely right next to all these people going about their work as though I weren’t there than I probably would have felt at a table by myself.

It’s also the case that watching the food being made at Hedone is not exactly a thrilling process. In fact, some of it seems more assembled than cooked and watching this assembly in action made the experience seem even more bloodless and distant. All of it was very tasty but it’s not very exciting when the answer to the question, “how did they make that?” seems to be “the chef took a wafer out of a small box that contained many such wafers, placed it on a plate, squeezed a little mousse over it, then took another disk of a gel of some kind out of another box that contained many such disks, placed that on top of it all and passed it to the server to give to me”. I know there’s obviously far more to the preparation than that but I’m not sure what I gain as a diner by being able to observe this clinical procedure. You may disagree.

Anyway, on to the food, which, as I’ve noted, was uniformly excellent. They offer a few menu options at lunch. You can do a lunch menu (which I think might be four or five courses) for £45, the regular tasting menu for £85 or what they call the Carte Blanche menu for £125. As I’d spent almost an hour getting to the restaurant the smaller lunch menu didn’t seem like the best return on investment; the Carte Blanche, on the other hand, seemed like too big an investment: the £85 tasting menu it was then. All these menus, by the way, change daily—you can’t find menus on their website and nor do they hand you one when you sit down. The restaurant is driven very strongly by a philosophy of cooking the best ingredients on hand and regardless of which menu option you choose you are putting yourself in the hands of the kitchen. But this, as I discovered, is a good thing.

The meal started with a series of small bites and then moved on to ever more robust dishes.

More comments about the meal (including the odd business at the end) after the slideshow. 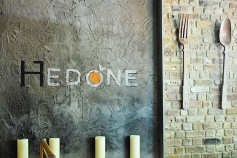 Just in case you forget which door you came in they have the name of the restaurant on an interior wall as well. 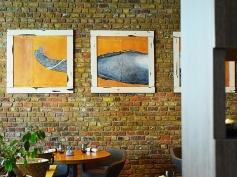 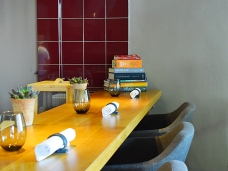 At the bottom of that pile is the Manresa book.

That’s Chef MIkael Jonsson in the grey shirt. He wasn’t cooking but was paying close attention to what was going on and it seemed like some dishes were being composed between courses. 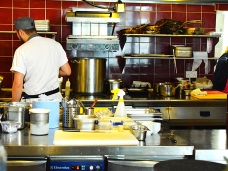 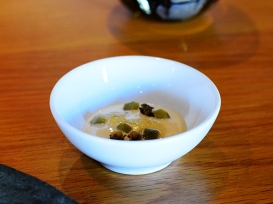 I was really hoping this was going to be for me. 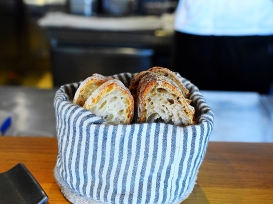 And then it was.

I assume the salt is made from dried white rhinoceros tears.

Too much of the mayo. 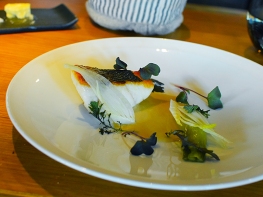 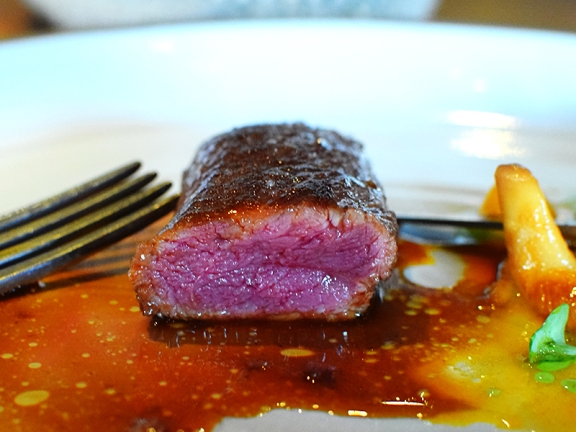 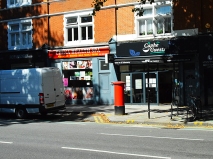 The scene across the street. 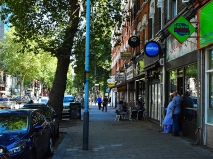 Remember how I noted of my meal at The Clove Club that while everything was good the meal was a bit disjointed? That the eclectic globe-hopping menu read well but didn’t always cohere? There was none of that at Hedone. The ingredients and cooking were top-notch, yes (and superior to The Clove Club) but the menu was composed very judiciously as well. And while there was technique out the wazoo it very rarely called attention to itself (only in the opening sequence of small bites really) and in every case was at the service of the ingredients. A lot of work went into every dish but it somehow still made an almost minimalist impact. Now that’s art. How much did this art cost me? About £100 with tax and tip. I try not to drink much when I travel and did not have any wine or cocktails with this meal. I will note by the way that none of the chefs in the kitchen at my meal were women—this is also unlike The Clove Club and here the comparison is not to its advantage. There were women washing dishes in the back and my server was a woman but the chefs were all young men. I’m not sure if this is representative of the kitchen’s normal staffing.

So, here’s the odd thing that happened.You will remember that there is no menu handed to diners at the beginning of the meal. After the chocolate mousse was cleared nothing happened for a long while. I sat there for about five or seven minutes and nothing else was brought out and nor was the check offered. I rose and went to the restroom and came back and sat down again for a few minutes. Again, nothing. Since it had been a while and I did have other things to do once I got back to the city I summoned the server and asked for the check. Certainly, she said, but instead of going to get it she summoned the chef behind the counter and they had a quick, intense chat. A couple of minutes later she then brought me the check and the petit fours and said something along the lines of “we have a third dessert usually—it is a peach financier today and it is taking a little longer in the oven”. I wasn’t sure if this meant that it was still coming out so I left the check and petit fours alone for a few minutes. This seemed to confuse my server and I realized that the financier was not in fact coming. And so I ate the petit fours, paid the bill and left. And no, there was nothing taken off the bill as acknowledgment of a missing course.

Now it’s entirely possible and even likely that since they seated me at 12 and not the planned 12.30 that this threw their timing off. That’s fine. But I’m not sure why they didn’t tell me about the third dessert when I asked for the check and see if I wanted to wait for it. And maybe knock the price of a bottle of water or something off the bill since I’m not actually being given everything I paid for? You tell me. Anyway, this bit of oddness aside, service was excellent and this was, on the whole, the best meal I’ve had this year (though I expect Joe Beef to give it a run for its money, if our Montreal plans for the end of the month hold). I’d recommend Hedone without hesitation to anyone looking for a meal of this kind/price in London and if we are in fact back in London in the spring of 2017, as currently planned, I’ll be back with the missus—and I’ll be sure to get the third dessert then!