We were recently in Montreal for a few days. It was a wonderful trip despite the grey weather (and a nightmarish travel day to end it after we missed our early morning nonstop flight back to Minneapolis). We hung out with some old friends who work there, walked around the city and saw a couple of really good exhibitions at the Museum of Fine Arts (one on Toulouse-Lautrec and another on Robert Mapplethorpe). And we ate some very good food. When it comes to food in the French vein, traditional and contemporary, there is probably no better city in North America than Montreal. There certainly isn’t a better city for bakeries and patisseries. I’m going to start my report though not with a bakery or a restaurant but with a visit we made on the morning of our second day there to the famous Jean-Talon market. In case you don’t know, Montreal has a number of public markets that combine traditional farmers’ markets with restaurants/food stands and various purveyors of cheese, pastry, meat, fish etc. And Jean-Talon is the most renowned of these markets.

We took the metro from the Downtown area down to Jean-Talon station and it’s a very short walk from there to the market. (Both the station and the market are named for the street they’re on.) If you’re thinking that late October is really no time to go to a mostly outdoor market in Montreal, well, you’re both right and wrong. It was a chilly and moist day but at this time of year there are enclosures put around much of the market making it a semi-indoor market. There were a large number of flower and produce vendors on our visit who were still outdoors (under tarps) but most of the market was completely indoors—the food purveyors certainly all were—and it was dry and warm there. Not having been there in the spring or summer I can’t speak to what it looks like then, and nor do I know what it’s like in the dead of winter, but I can tell you that late October is a perfectly fine time to go to Jean-Talon.

This is true even if you are staying at a hotel and don’t have a kitchen at hand. This because the food there is worth a trip in its own right: in particular, as good as our formal meals on the trip were, the oysters at La Boîte aux Huîtres were among the highlights. (I’m not saying that a trip to Montreal is worth it for the food at Jean-Talon; I’m saying if you’re in Montreal you should go to Jean-Talon and walk around the market and eat no matter what the season.) That said, if you do have a kitchen at hand (if you’re doing the Airbnb thing—which we were not) you’ll be very happy as the fish, meat, cheese and mushrooms on hand are of an order you can’t find at American farmers’ markets, and certainly not for these prices. As far as the vegetables and fruit go, if you have an excellent famers’ market near you (like the Santa Monica farmers’ market, for example) you probably won’t be over-impressed by Jean-Talon’s offerings in that area.

I took a lot of pictures. So many that putting them all up in one post will make for a gallery so large that even I will be fatigued by the thought of looking at them. Accordingly, I am dividing my Jean-Talon report into two parts. This first part will cover everything except the places we ate at; the next report will cover the places we ate at (that will follow in a few days or a week). I generally avoided getting in the way of actual paying customers and so with some exceptions these are not the best photographs of all the available wares. I hope the pictures will give you a sense of the market though—and if you’re a Montrealer who can fill in more information, correct any errors or make recommendations, I invite you to please do so in the comments. 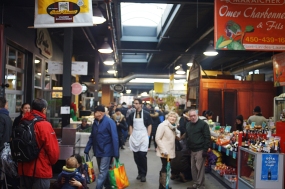 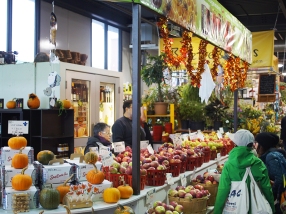 Because of the maple syrup monopoly over representations of Canadian tree-based products I’d never realized that they apparently grow a lot of apples there too.

I was not surprised, however, to see honey being sold. There’s a pretty strong honey vendor requirement that has to be met to be a farmers’ market in North America. 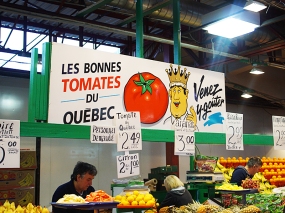 I also would not have expected tomatoes in late October. Are there particular heirloom varieties associated with Quebec?

You know you’re in French Canada though when the farmers’ market features large mounds of artichokes and fennel. The vendors upto this point were in the formally covered section of the market.

The flower sellers, however, were outside and not doing much business–in fact there was nobody even manning this outlet.

And far fewer shoppers were giving the outdoor vegetable vendors any custom either. 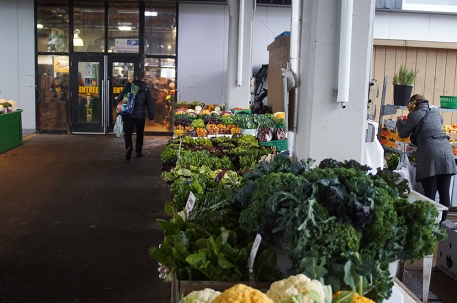 Not that I blame them given the weather. 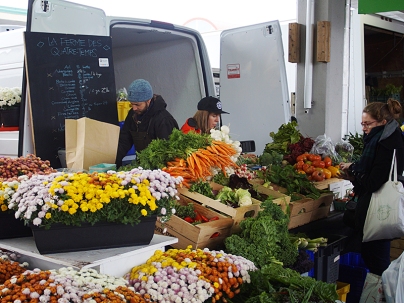 Some vendors, however, were doing brisk business despite the chill and drizzle. The carrots here looked very good. 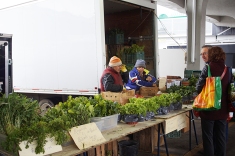 As did the greens at this stand.

Back indoors at Les Jardins Sauvages, who have a great name and an even greater selection of foraged mushrooms. 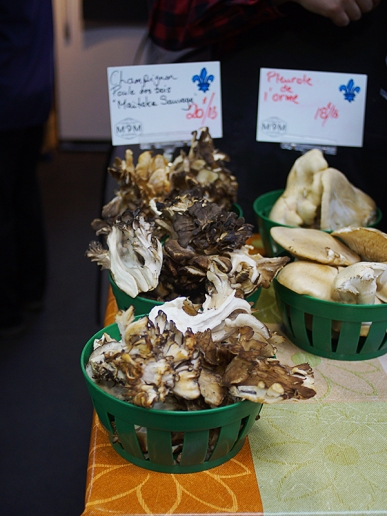 Some of which turned out, on closer examination, to be excellent looking maitakes.

Various excellent-looking mushrooms. While prices on these rarer mushrooms were high, the prices for most everything else were all very reasonable.

I hope the cheesemonger will forgive this candid shot.

A selection of cheeses—I believe they specialize in cheese from Quebec. 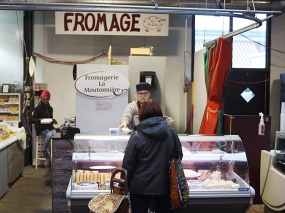 I believe they specialize in sheep’s milk cheese. 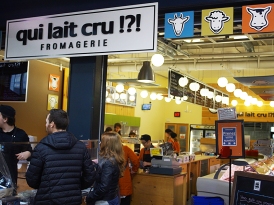 Not sure if these people have a hook but they have a fancy store.

This was not the only butchers but the only one I went into. 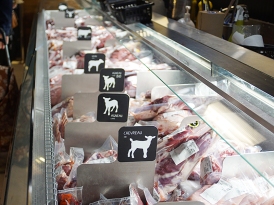 They sell an assortment of regular meats.

You can also get bison and red deer.

And over by the chicken you can also get some horse. 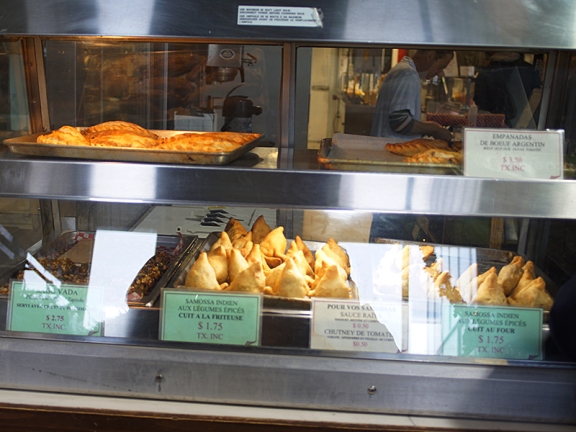 Not too far away from it was this store selling samosas, among other things. I couldn’t see any Indian connection beyond the samosas.

Not too far from the butchers (and right opposite the oyster shop) was this stand selling various excellent looking cured meats and sausages.

This charcuterie and sausage store is at the opposite end of the food section, over by the various fromageries. Their sausage sandwiches are also apparently well-known.

Right in the middle of the food area is this large bakery that seems to have a Middle Eastern and Mediterranean focus.

This counter very close to it specializes in Polish pastries.

This counter was not manned by anyone who looked to be of obvious Mexican descent but was serving up pretty legit looking cochinita pibil in both taco and sandwich form.

That’s it for the first report. I should emphasize that this is far from an exhaustive report on the vendors and food outlets at Jean-Talon. There were many, many more that I did not photograph: far more produce stands, more cheesemongers, more butchers, more food vendors that we did not patronize. This is because I couldn’t photograph everything. I’ve probably missed a number of iconic vendors/counters/stands, and if so please let us know which those are. Even if I don’t get to go back to Montreal anytime soon, it will be of use to others reading this post.

Coming up soon: the food we ate at Jean-Talon and the counters where we got it.