This is the final big meal report from our trip to Montreal in late October, though not the final Montreal report per se—I’ll have another very brief report next week, probably, on some pastry eating. This dinner at Hotel Herman was the last meal of our trip (unless, you count the terrible food we ate at the airport for breakfast and lunch the next day after missing our early morning flight to Minneapolis). It followed dinner at Joe Beef the night before (and brunch that morning at Olive et Gourmando). I wasn’t expecting to say that I might have liked this meal even more than our dinner at Joe Beef but that might possibly be true.

To be fair, that might be because we ate there after Joe Beef. Even a non-meat centered dinner at Joe Beef (as ours was, relatively speaking) is a pretty over-the-top experience and it’s possible we were more taken with Hotel Herman’s approach than we might otherwise have been because it was so much more restrained by contrast. (For Twin Cities people I’ll say that the local restaurant it most resembles is Piccolo, though their portion sizes are much larger.) It certainly is a very different restaurant than Joe Beef in every way (and it’s not a hotel).

This starts with the location. While Joe Beef is in grittier Little Burgundy, Hotel Herman is located in the altogether hipper Plateau, on St. Laurent—not too far from Le Comptoir. And when you enter the restaurant it’s clear that its aesthetic is far more in line with current dining trends aimed at hipsters: the bulk of the restaurant is taken up by a large central counter (there are tables on either side as well, but unless you’re in a large group, the counter is clearly the place to be). There’s an open kitchen and there’s apparently even a turntable somewhere where patrons can spin vinyl of their choice—I have to say we did not notice this happening. It’s not very much brighter than Joe Beef, and when full (we were there on a drizzly Sunday night) I’m sure it gets pretty loud too but on our visit it was much calmer here than at Joe Beef. I should say that I really enjoy the feel of Joe Beef, and much prefer its atmosphere. Unlike Joe Beef, it’s very easy to imagine Hotel Herman transplanted to any number of North American cities (I refer to the aesthetic/atmosphere rather than the food).

And their approach to cooking and plating is also quite different. Where Joe Beef serves up their maximalist, reconstructed take on bistro food, Hotel Herman is altogether more modern and far more restrained in terms of what and how much they put on their plates. When you’re at Joe Beef the very idea of small plates seems both laughable and contemptible. Here each dish does not have the tonnage to fell a grown giant—as you’ll see in the pictures below, there’s a lot of blank space on every plate and bowl. And unlike at Joe Beef, where vegetarians are doomed to starve, at Hotel Herman not only are there a number of vegetarian plates, even many of the non-vegetarian plates seem as oriented around vegetables as they are around flesh. Indeed, a number of people, including our Montrealer friends (one of whom is as dedicated to meat as I am) stressed that we should make it a point to eat their vegetable-focused plates. And those who know me well will be shocked to hear that not only did I think that a vegetarian dish was among the highlights, I also thought the vegetables might have been the highlights on plates that also featured flesh.

Before I move on to what we ate I have to apologize for the fact that this is a more fragmentary/incomplete report than even my usual. This because my notes on the meal were taken on my phone and the file was overwritten by one or the other of my brats. As the menu card—a couple of blurry pictures of which I took—was minimalist, and as they’ve since overhauled the menu on the website, I can’t give very many details and in some cases don’t fully remember every component in every dish (or drink, for that matter). You should still be able to get a feel for the restaurant’s approach, however, from the inadequate descriptions and pictures.

So, what did we eat and drink?

They’re known for their list of natural wines but as we had to be up very early in the morning to miss our flight we decided to just get a cocktail each. The missus got a spritz of some kind—their website currently lists an apricot spritz which may or may not have been what they were offering in late October—and I had a cocktail called the Sage, with bourbon and yes, sage. Both were very good.

*Lobster Bisque, sunchoke, chicken skin: As continues to be the style these days, the bowl showed up with thinly sliced disks of sunchoke with crispy chicken skin on it and the bisque was then poured around it. The bisque was dynamite. The sunchokes presented very good textural contrast and an earthy counterpoint. The chicken skin, alas, was a complete non-sequitur.

*Monkfish, white turnips, soy: The fish was prepared very well but it was the goddamned turnips that were the star of the plate. And the presentation might suggest that they know it too.

*Mackerel, romanesco, shiso: The fish was again excellent—grilled/charred to set off the oil—but, once again, the star of the plate was the veg, the very excellent romanesco. Neither of us found much evidence of the shiso but we weren’t complaining.

*Brussels Sprouts, hollandaise, mustard: We might have both had this as our favourite plate of the night and if you’d told me this was possible before we sat down I would have called you a cream-faced loon and invited the Devil to damn thee black. About all the argument I need to convince me of Hotel Herman as a veg-centric restaurant.

*Duck, carrots, stout ragout: If I had been served duck this good at a restaurant in the Twin Cities I would have burst into song. Yet, you must please forgive me for saying that the fucking carrots might have been the star on the plate. I don’t know what they did to them but they were the utter carroty essence of carrot. So much so that the utterly pointless and uninteresting ragout did not bother me.

*Buckwheat, chocolate, thyme: There were only two desserts on the menu and neither minimalist description particularly enthused us. As such, we were inclining towards cheese to finish; however, our server convinced us to give the unpromisingly named “Buckwheat” a try. Well, I can’t say that it quite scratched a dessert itch for either of us—our tolerance of modernist food usually ends before the dessert course—but I have to admit it was quite interesting: whatever had been done to the buckwheat made it dehydrated, airy and somehow texturally rich all at once. The fact that the chocolate turned out to be white chocolate, however, was a demerit.

For pictures of the food and drink please click on the slideshow below. For a few more comments on the restaurant, including some service missteps, please scroll down. 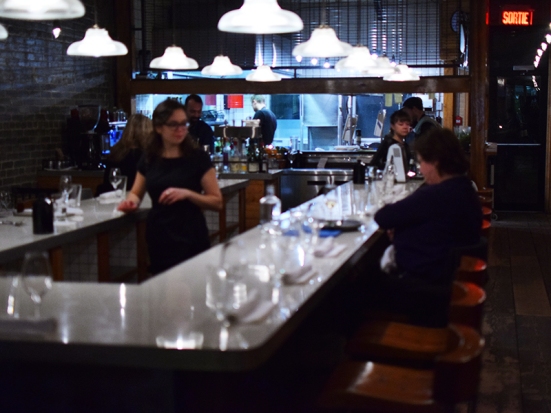 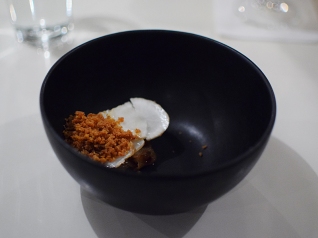 It might not have been up to their standards but the bread was very good.

It was right as I was about to sink my fork into this lovely plate of lobster and shaved watermelon radish that the missus pointed out that we had not ordered it. 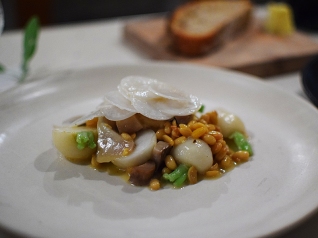 Service was generally pleasant but not always present. Despite the restaurant being far from full—again, we were there on a drizzly Sunday evening—and despite there not being very many people at the counter, our server often lost sight of us. She also brought us one plate we hadn’t ordered—at that point there were only two other tables, and a solo counter diner well into her meal, in the house. And there was some oddness with the bread. We ordered it (it’s $2 on the menu) and when it showed up she told us it was on the house (good!) because it was not up to their usual standard (um…). I’m glad she didn’t charge us for substandard bread but that didn’t change the fact that we were told that we were being given substandard bread. I have to admit I’m not sure how she should have handled the situation but it felt odd.

How much did all this cost? I fear I am going to be unreliable on this front too. Usually, I look to my credit card account to verify but on this occasion we were unloading Canadian cash money before departure and so split the receipt between cash and credit. I want to say, however, that it wasn’t very much more than $60 (CAD)/head for what we ate and drank. Which was a screaming deal for what we ate relative to the US.

As I said before, we might have liked this the most of all our meals on this trip—though I’m not sure if the descriptions above quite convey that. As I also said, this may be a matter of juxtaposition. Coming here after Le Comptoir and Joe Beef (and even Olive et Gourmando) might have made its approach stand out more. I will say that, on the basis of the very limited evidence of two short trips, if I could only eat one more meal in Montreal again it would be at Joe Beef, hands down, but if I lived in Montreal I would probably eat more often at Hotel Herman. I would, at any rate, recommend it highly to anyone going to Montreal.