I don’t have a whole lot left to say about Piccolo except that this is my ninth review of a meal there in the last few years and that I still am depressed about the fact that they will be open for less than two more months. We last ate there in the second week of December and when we found out at that meal that they were going to have a special New Year’s weekend menu, and that Doug Flicker would be in the kitchen cooking it, it took about 3 seconds for us to decide that we’d be back soon to eat it. This is a brief account of that meal. We were joined by friends we’ve eaten there with before, and who are also big fans. It turned out to be one of the best meals any of us had eaten there—which is saying something, as the last meal we ate there together was pretty amazing too.

Even though this was a one-off menu (a fixed, seven course menu for $90/head) this is not as low-utility a review as you might think—this because some of these dishes are on the current menu. Can I say again that if you have not been to Piccolo, or haven’t been recently, you really should go before they close?

This was the menu:

Smoked scallop with onion puree and fennel juice: This is on the current menu too and if you see it, you should get it. Though I prefer my scallops raw and sweet this was excellent. No astringence from the onion puree and the pairing of scallop and fennel is inspired.

Sun choke consommé with chicken liver, black truffle and almond oil: Just excellent. I was convinced the consommé must have been made with veal stock but we were told, no, it was just blanched sun chokes. Bloody hell. I could have had a gallon even without the liver and truffle. Also on the current menu.

Dungeness crab ravioli with cauliflower and seaweed/potato butter: I thought the edges of my ravioli were a little too hard but my companions regarded me with scorn for saying so. I had no complaints about the contents. Also on the current menu.

Flounder with potato puree, bottarga/olive oil and squash jus: As I’ve said before, Piccolo is great with fish and this was about as good an advertisement for their skill as I can imagine. I didn’t taste much evidence of the bottarga but I had no complaints. Also on the current menu.

Aged squab with parsnip custard, black truffle and huckleberry: I can’t remember if this was our first time encountering squab at Piccolo but this was excellent—tied with the consommé, I think, for the table’s consensus favourite course. Also on the current menu.

Venison loin with fermented celery root tart: The above is not to say that there was anything disappointing about the venision. I will say, however, that, as one of our friends pointed out, the celeriac “tart” was exquisitely presented but sort of hard to eat except as one big bite: this because the many wafer-thin layers rendered it all but impossible to cut without destroying it. This is what is known as a First World problem. Also on the current menu.

Sweet potato gelato with marcona almond milk, ginger, and cocoa nibs: You might think that sweet potato gelato cannot possibly be a good thing. It pains me to tell you that you are a fool. Then again, I was a fool too till I ate it.

Click on an image below to launch a slideshow with larger images. And scroll down for closing thoughts.

Before the consommé was poured over. 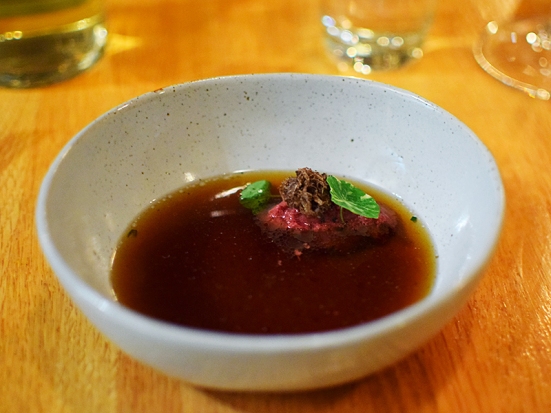 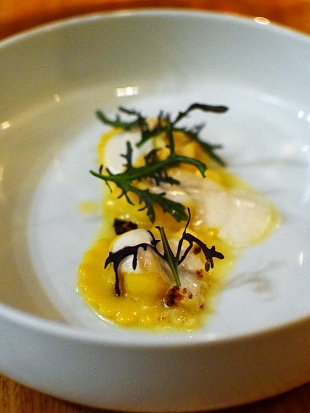 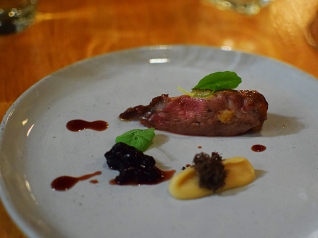 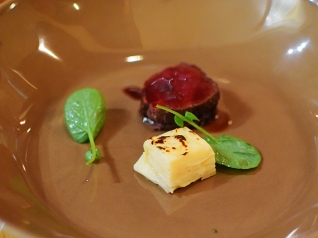 There was another (unlisted) mini-course before the dessert: a one-bite thing. I’m afraid I don’t remember the details: this is what happens when people force you to drink most of the two carafes of wine you ordered. All this food, the two carafes of wine (a tokaji and a nebbiolo), tax and tip came to $135/head. Very, very far from cheap, but an indulgence we were willing to make given how few opportunities remain to eat at Piccolo.

As I said, a number of these dishes are on the current menu and I recommend them all highly if you encounter them. We will probably return again in a couple of week—even if the menu doesn’t get a fuller overhaul—and then again in late February or early March before they close for good. After that we will be very sad.

One thought on “Piccolo IX”