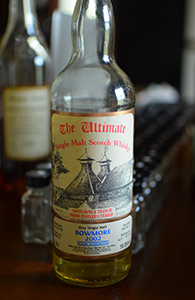 Here is a review of a Bowmore that was released four and a half years ago and not in the United States. You’re welcome!

As you may know, Bowmore’s 1980s distillate has a very bad reputation, with a lot of the whisky produced from it demonstrating overly perfumed and soapy qualities. I’m one of those who thinks—based on my limited, random sampling—that the problem was mostly worked out by 1989 or so. However, it must be admitted that the soapy/glycerine thing pops up from time to time in the following decades as well. This 10 yo is an example of that. It wasn’t so pronounced when I first opened the bottle last year—it did very well at one of my local group’s blind tastings—but as it stayed open it magnified a little too much on the palate. I don’t mean to set off another round of Bowmore hysteria but I’m curious as to whether anyone else has encountered this elsewhere in early 2000s distillate. It may well be, of course, a case of an off barrel being bottled by an indie—I haven’t had any recent official releases that would have been distilled in this era.

Nose: Mildly smoky start—like a well-cleaned pipe that hasn’t been smoked in a while. Some cream and vanilla too and a bit of lemon and, unfortunately, just a hint of hand-cream. Gets more coastal as it sits with some kelp and oyster liquor; more phenolic and peppery too now. The hand-cream recedes with time and water knocks it back further, bringing out more of the fruit and the coastal notes.

Palate: Hits with the lemon which eases into the smoke and then sweet, musky fruit. The hand-cream is thankfully very discreet here—just a touch of it (more soapy here) and not enough to detract from the good stuff. Ashier on the second sip. Rather drinkable at full strength. Fruitier with time (mildly tropical notes) but the glycerine gets stronger too. Water does push it back; it also pushes back the smoke and makes the whole sweeter.

Finish: Long. The fruit lingers a good while and it gets quite salty. That glycerine note pops up again at the very end and, unfortunately, it gets pronounced enough with time to bother me. As on the palate with water.

Comments: A very coastal Bowmore which could have been great if that damned hand-cream/soap note weren’t there or if it had gone away on the finish as it did on the nose. It’s not completely overbearing and it doesn’t ruin the whisky but it does hold it back. Not so much an issue if you drink this fast and add water early. (And a food pairing tip: if you drink this with dark chocolate fudge it will knock out the glycerine and emphasize the citrus.)