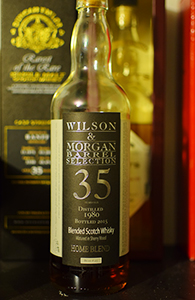 This blended whisky was put out by the Italian bottlers, Wilson & Morgan. I’m not sure how it was made—other than noting sherry cask maturation the label does not specify. Was it one of those rare cases of a grain whisky and a malt whisky being combined at distillation and matured as a blend for the full term? Or was it two separate casks married together at the age of 35? Unless the sherry cask was merely a “finishing” or “marrying” cask I’d expect it to be blended at birth (so to speak), as I’m not sure how common maturing grain whisky in sherry casks would have been in 1980. It’s also the case that they released three separate casks of a 35 yo blend in 2015, all from the 1980 vintage. This might suggest that they were all single casks. I assume they came across these casks in someone’s moldering inventory and snapped them up—Wilson & Morgan don’t seem to have released any other such blends at any rate.. If you know more about the antecedents of these casks please write in below.

I do know that this was released at a very reasonable price (<200 Euros) and that it hung around for a while (I think it’s all gone by now though); later . I opened it at a whisky gathering in St. Paul last year that focussed on sherried whiskies and most of us liked it a lot. I’ve been drinking it steadily since and continue to like it a lot. Here now is my review.

Nose: Cocoa, pipe tobacco and a bit of dried orange peel. A little more earthy and leathery as it sits; some pencil lead/graphite too now. The fruit gets richer with time: apricot and plum now. With a few drops of water the emphasis shifts to the fruit.

Palate: The sherry is to the fore on the palate, with dried fruit and nuts leading the way and the earthier notes behind. Wonderful balance and integration of flavours, and the mouthfeel is very nice too. With more time the oak gets more prominent and the cocoa moves towards milk chocolate; the citrus gets a little brighter too. Water knocks the oak back and pulls out some malty notes.

Finish: Medium-long. Nothing new here; the nutty notes get a little more bitter and the orange pops up again at the end. Longer with water and maltier and fruitier.

Comments: Very elegant and balanced—in some ways it reminds me of my last bottle of Bunnahabhain 18 (mellow sherry). Yes, I think this was probably blended at birth. A very good value at the price I paid for it. I wonder if they have more of these casks that they’re letting age longer. I have to say I think this was bottled at the right time; it probably would have gotten oakier on the palate with more time.