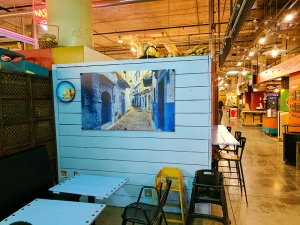 As I said last week, the focus of my restaurant reviews is going to shift for the foreseeable future to smaller, immigrant-run restaurants. I also said that I would be making more of an effort to get to restaurants serving the cuisines of countries and regions and peoples that have been targeted by the rhetoric and policies of the new administration in the United States, and in particular to Somali, North African and Middle Eastern restaurants. I had a review of a Somali restaurant last week (Nawal in Burnsville) and this week I have a review of Moroccan Flavors in Minneapolis. The Twin Cities do not have an embarrassment of riches when it comes to North African cuisines (and the well-regarded Saffron shut down last year) but I am happy to say that in Moroccan Flavors the region has a worthy representative.

Located in the excellent Midtown Global Market, Moroccan Flavors opened last year. It is owned and operated by two chefs, Hassan Ziadi and Samlali Raja (who are married to each other). Chef Ziadi is the face of the operation and he’s not new to the Twin Cities. A lifelong chef, he worked at a number of Twin Cities restaurant from 1995-2000 (including Aquavit) and again after he and his wife (who he met in a restaurant kitchen in Qatar) returned to Minneapolis a few years ago to raise their family—now there’s a story of global crossings for you. Most recently he was at the (now also shuttered) Vincent A Restaurant. Their path to the Midtown Global Market went through the excellent Neighborhood Development Center (NDC) and their dream is to go beyond it to a more formal restaurant of their own. In the meantime, we are very lucky to have them at the Midtown Global Market.

We descended on them this part weekend with a group of friends. It was the first time there for all of us. They occupy the space formerly taken up by the Sonora Grill (who did in fact graduate to a formal restaurant space), right alongside the Hot Indian Foods counter (which sits where the long gone but still missed La Sirena Gorda used to be). Despite being just past the bustling center of the market and its performing space, Moroccan Flavors feels like a calm, relaxed retreat. In large part this is due to the cool blue colour palette of the design, which stands out against the oranges and yellows and browns of most of the rest of the market. There is a fair bit of seating: one large table for bigger groups and a few four and two-tops; and there are also two counters: one with a handful of seats opposite the restaurant and one longer counter extending past the service area.

When we arrived, a little before noon on Sunday, there were not a whole lot of people there but I am pleased to say that custom picked up rapidly, between people sitting down and people getting food to go—despite being a little out of the main drag of the market they seem to not be having trouble drawing customers. And when you eat the food you know why: everyone around us was visibly happy with their food and so were we.

As is our wont, we over-ordered with a view to trying as much of their menu as we could. The menu itself is compact—a very good idea as it allows them both greater efficiency in the two-person kitchen and greater attention on each dish. There is an assortment of “Mediterranean salads” (mezze) you can choose from as opening nibbles, a couple of sandwich options and then a few couscous and tagine choices. You can also supplement these with a few side-dishes and close with a choice of pastries etc. In addition to the regular menu (which you can peruse here), they have a couple of rotating specials. This past weekend these were a kofta (meatball) tagine and a lamb shank tagine; both were good, but if you see the lamb shank tagine offered when you go, drop everything and order it. Chef Ziadi said they make only a limited amount of the rotating specials each day and, trust me, you don’t want to miss it. Other than the specials, which just nudge past it, everything else is below $10. It’s incredible value for what you get.

So, what did we get?

Having drastically over-ordered (for five adults—other dastardly members of the group got food from other counters), we did not have space to try their desserts (next time)—however, Chef Ziadi very kindly offered us mint tea on the house and we felt it would be churlish to refuse. This mint tea was also excellent.

Please click on an image below to launch a slideshow that may give you a better sense of the food. (I have to apologize for the pictures. In the bustle of departure I forgot my camera at home and so had to rely on my new phone. While it does in fact have a very good camera, it didn’t do so well with the white balance for shots of the food with cold light coming down from above.) 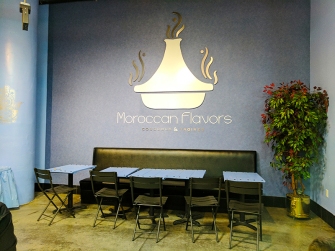 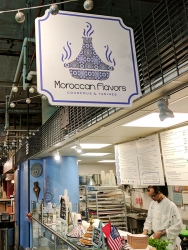 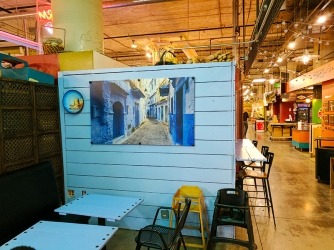 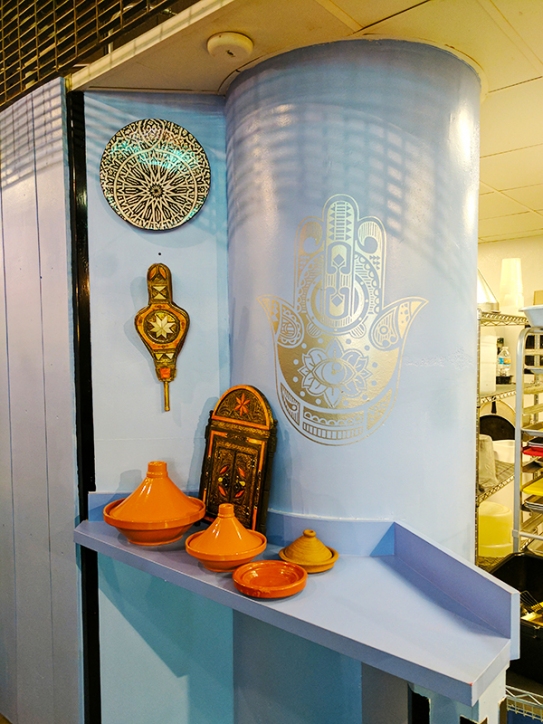 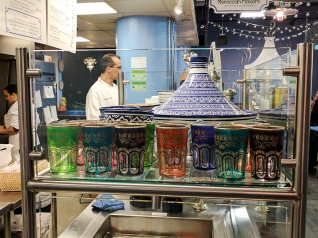 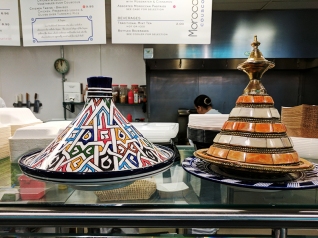 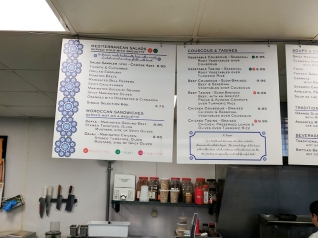 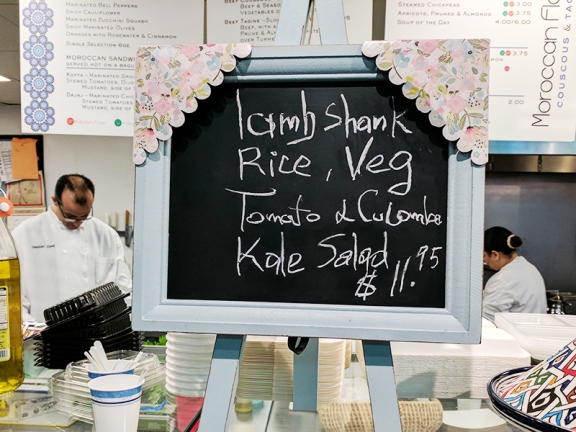 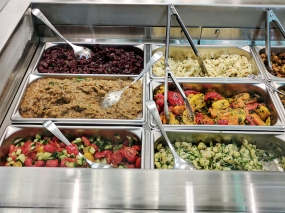 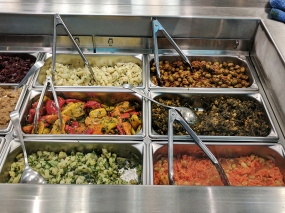 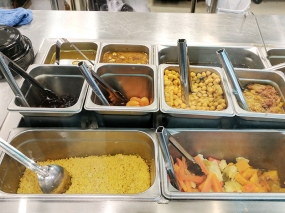 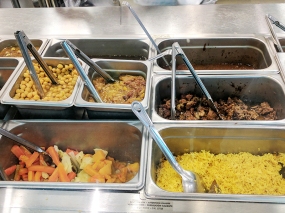 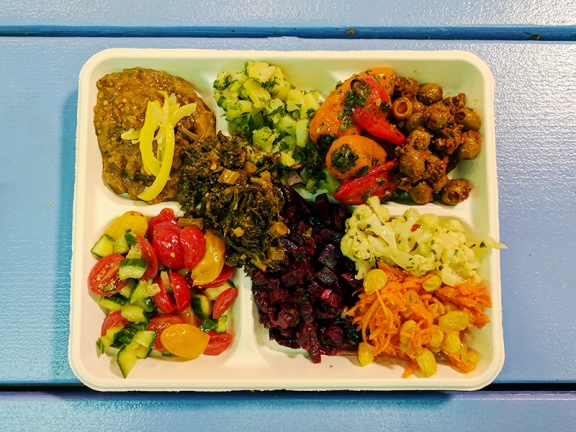 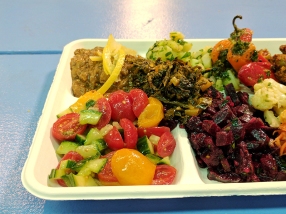 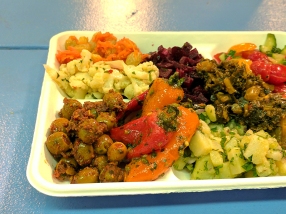 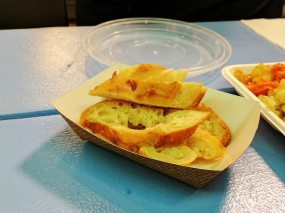 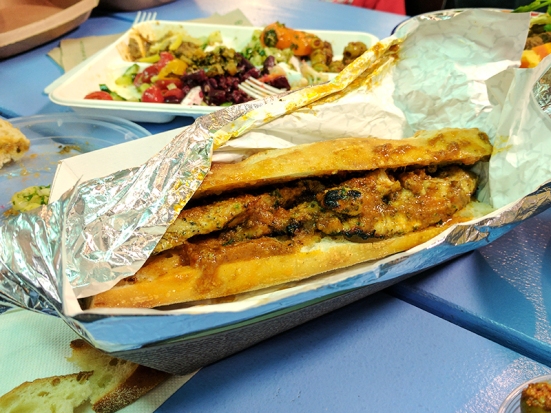 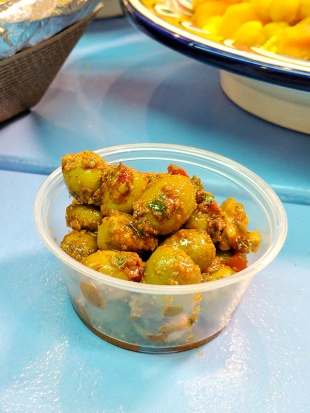 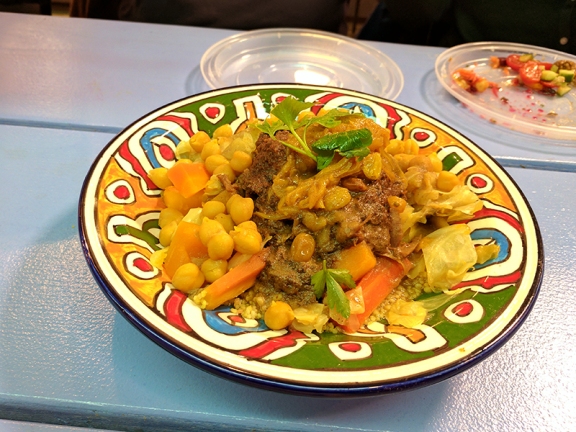 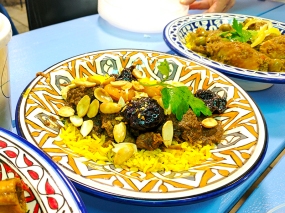 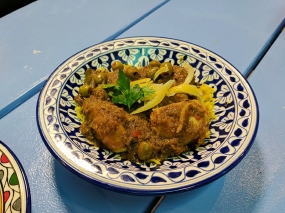 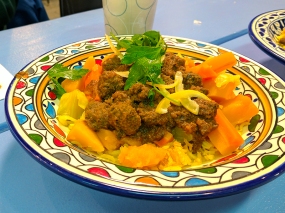 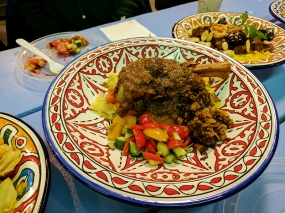 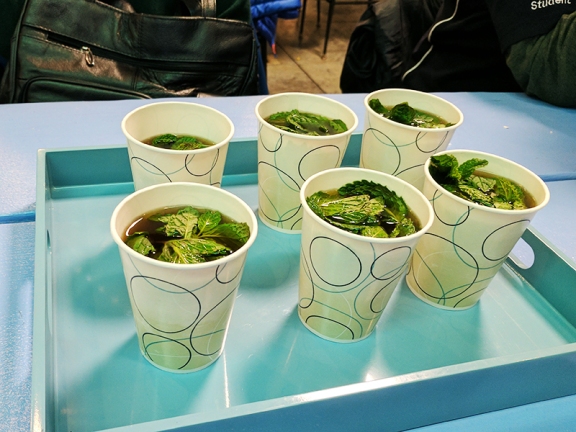 After a disappointing outing at the Rabbit Hole, we were very happy with this meal and I think Moroccan Flavors may have jumped right to the top of our pecking order for the Midtown Market. I really recommend them highly, whether you go for a quick weekday meal or for a more relaxed weekend outing at the market. It’s good food, prepared with care (and it’s not going to shock the Midwestern palate) and it’s very reasonably priced for what it is. And while I wish the owners well with their dream of opening a more formal restaurant, I have to say that in this market—where formal restaurants are closing left and right—operating a successful counter at the Midtown Market is not a bad fate. If you haven’t been, you should go (and I wish we had gone earlier) and if you have been you should tell more people about them.