There is no denying that I am a lazy bastard. I am not a fan of exercise. This is because exercise is boring. When at home (which is most of the time) I take my dogs for a walk every day—a mile or so at a time—but if not for them I wouldn’t be likely to do it. Nor, unlike some of my friends, am I drawn to walking through the woods or prairie landscapes in/around our little town. But put me in an interesting city and watch me go. I’ve walked miles in Montreal on my two visits (see here, for example) and in London I’m averaging somewhere between 3-4 miles a day and often not in sensible shoes. In fact, I’ve been going out of my way to walk. Such, for example, was the bit of extended perambulation—or flaneurie, if you will—that led to the rather haphazard collection of images of street art in this post.

A few weeks ago I went grocery shopping in Brick Lane and being an eagle-eyed sort, noticed a lot of striking street art along the way. Recently, I returned to the general area for the express purpose of wandering aimlessly for a couple of hours and seeing what I could see. I took the Northern line of the tube up to Old Street station and walked down from there to Shoreditch and then to Spitalfields and Brick Lane and then down to the Whitechapel station, from whence I took the District line back home. Having googled a bit for likely spots, I spent most of my time on and just off Rivington St. and in New Inn Yard, where a wide range of street art can be found. Some areas—in and around the Cargo Club at one end of Rivington St. in particular—have heavy concentrations of what seem like major pieces.

I do not pretend to offer any sort of comprehensive guide to the street art in the area. I will also spare you an ersatz critique on the commodification of street art and the ironies thereof. It was not in any case my desire to find every single piece of street art in the area—people who know the street art of the area intimately will be sure to point out that I have missed a number of major pieces/major artists and that I’ve probably been taken by some marginal pieces. It’s true: I didn’t go down every alley and corner or examine every wall closely. It’s also true that I don’t know very much about street art (in London or elsewhere) or about the history of street art in the Shoreditch/Brick Lane area. In most cases I have no idea who the artists are who’ve made the pieces I’ve photographed—I do hope more knowledgeable people may fill that information in. In the cases where I’ve put in the names of pieces or artists I’ve mostly found them by doing Google image searches for terms like “Shoreditch street art” and seeing if the pieces I photographed were named elsewhere; I’ve also managed to successfully decipher some of the signatures.

It is, of course, possible to book street art tours with people who know these kinds of things. But it was my intention to wander the streets not as though I were in an outdoor gallery but as though I were wandering the streets and letting my eyes rest where they happened to fall. It’s best not to curate every aspect of life. (Also, booking a street art tour is a bit of a hassle and I am, as I said, lazy.) The gallery below therefore follows only the route I took. The first few images are from a grocery shopping run. The rest are from one extended stroll. On another day I might have gone in different directions and seen (or missed) different things, or I might have gone along the same path and seen different things. You should certainly not use any of this as a guide if you go in search of street art in the area—and, of course, many of these pieces may not still be around when you go: some seem quite obviously likely to have a short lifespan. And some are apparently relatively new (in case you’ve been to the exact same spots before and not seen them).

All the pictures below have been taken with my phone (the smaller Pixel) and have been brightened lightly in Photoshop. All faults in the images are the responsibility of Google and Adobe—please take your complaints up with them. Once you’ve launched the gallery you can also click on a link within each image slide to view a larger image (1000×750 or 750X1000 pixels). 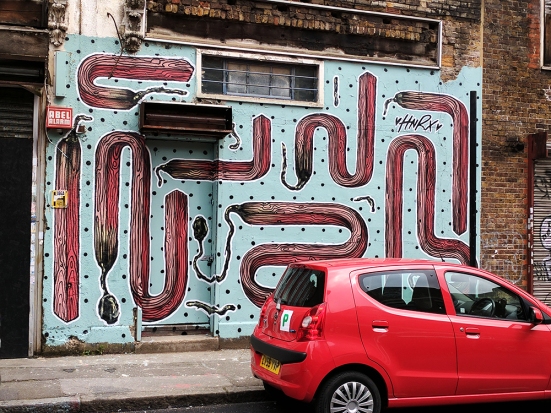 I love this piece I came across while headed to a Bangladeshi store in Brick Lane. HNRX is an Austrian artist.

No idea who this is by either. 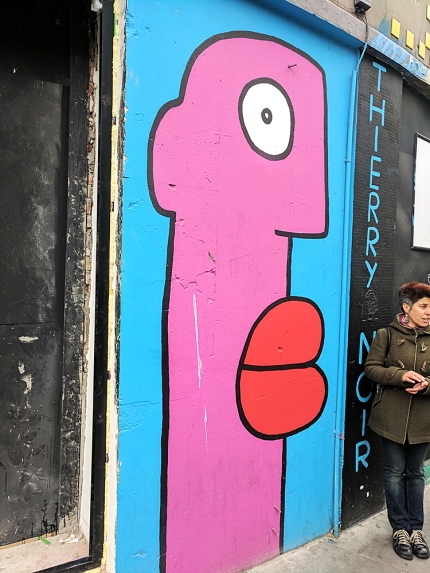 Various small pieces—no idea who the artists are. 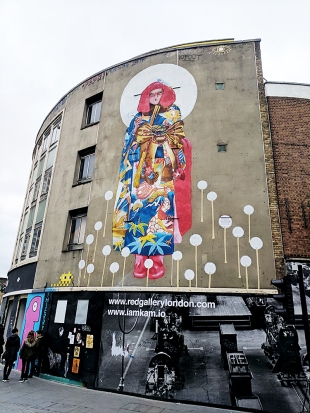 No idea who this artist is either.

This is by a Brazilian artist named Ananda Nahu.

Don’t know who the artist is.

Don’t know who this artist is either. 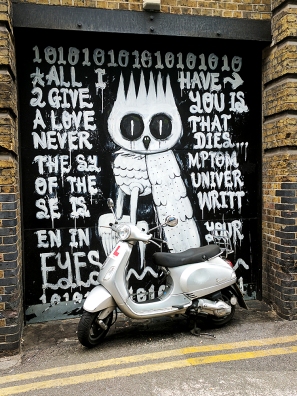 Featuring the lyrics of a Black Sabbath song.

James Cochran aka Jimmy C (see the signature) is an Australian artist.

Doesn’t seem likely to have a long lifespan. 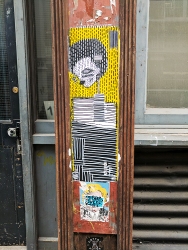 Alo is an Italian artist. 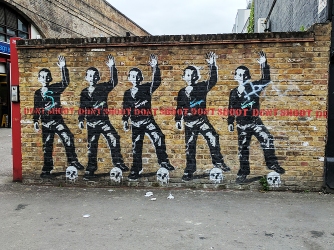 This striking piece by the new mystery artist is across from the Cargo Club. 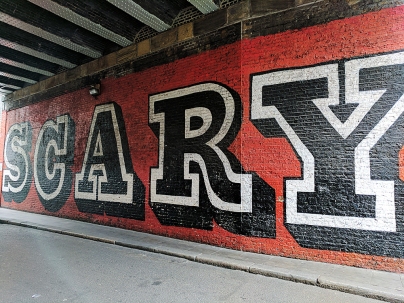 Outside the Cargo Club

This is also near the Cargo Club 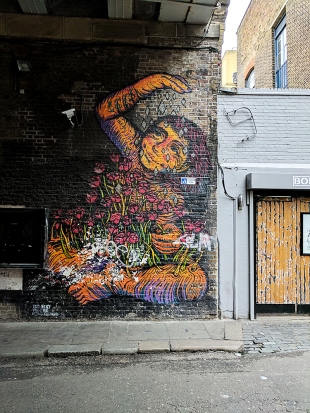 Bastardilla is a Colombian artist.

Also near the Cargo Club

These caught my eye—not sure if they’re street art per se.

Stik is a well-known street artist. This is also very near the Cargo Club.

A group of Israeli artists apparently. This is in the courtyard of the Cargo Club

Also in the Cargo Club courtyard 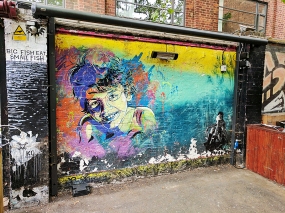 C215 is a well-known French artist. This is also in the Cargo Club courtyard.

I liked these two spare pieces in the Cargo Club courtyard…

Not sure who the artist is.

This, however, is by Banksy. In the Cargo Club courtyard.

This piece above is by Smif. 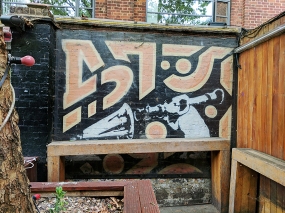 And this is Banksy again. Also in the Cargo Club courtyard. 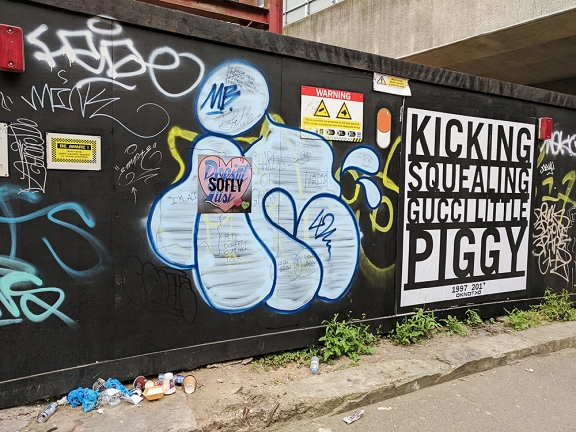 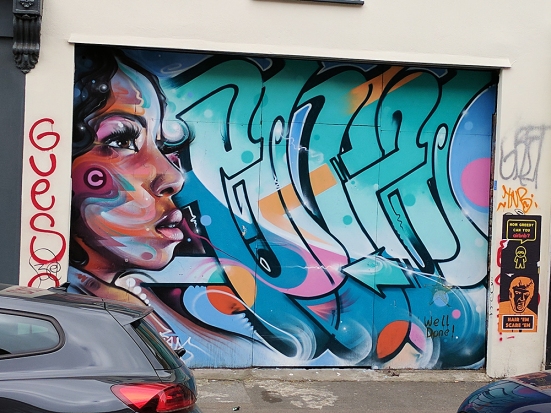 Alongside the Mr. Cenz piece.

This stretch of wall is particularly rich. 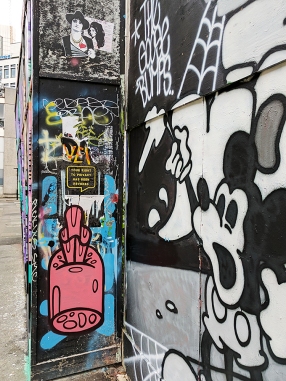 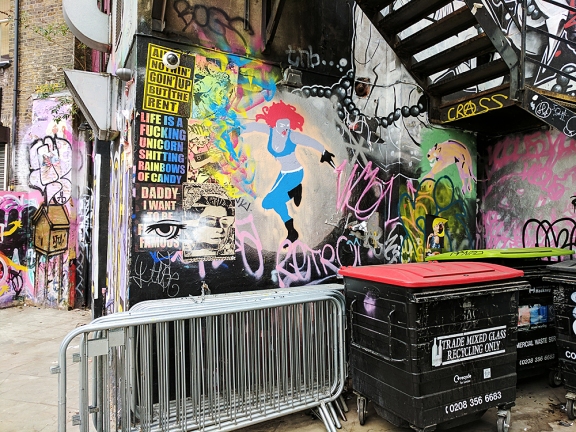 A bunch of pieces by some trashcans. 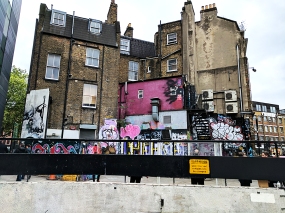 There are a lot of pieces on the side of those buildings but I also liked the effect from afar.

Some rather striking pieces unfortunately fenced in by construction. 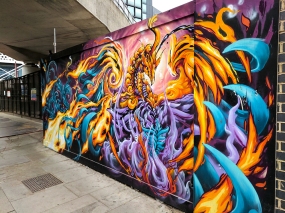 Can’t quite read the signature of the artist—I *think* this was in Holywell Lane; nearby at any rate.

I liked the juxtaposition more than the individual pieces here. 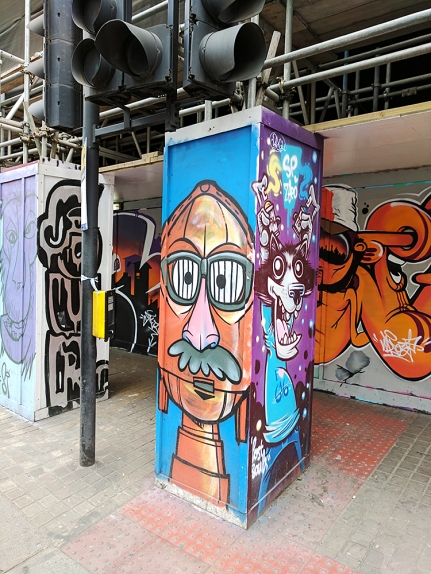 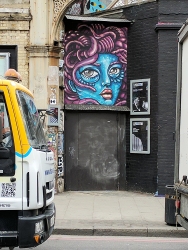 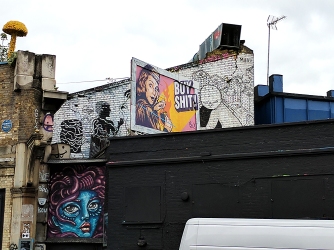 At the intersection of Great Eastern Street and Shoreditch High Street.

Yes. This stencil of Trump shows up on a lot of walls, with different captions. 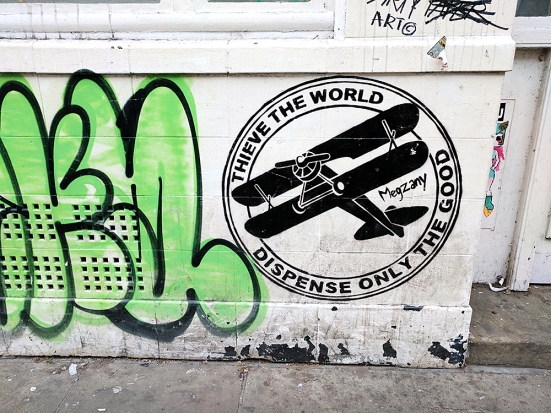 Indeed. This is by Megzany, a Los Angeles-based artist.

As I said, I do hope those who know more about these pieces and artists will chime in below. And if there are other neighbourhoods in London that offer such rich concentrations of street art please let me know which they are. I am not sure how much time I have left in London for aimless wandering but I will give it a try. And please also let me know if there are any prominent South Asian street artists in east London: I was sort of hoping to see some Bangladeshi-themed work in Brick Lane—it’s possible, of course, that I saw work by South Asian artists and didn’t realize it.

By the way, while on Rivington St. I also stopped in at “You Get Me?”, an exhibition of photographs by Mahtab Hussain that just opened at the Autograph ABP gallery. It’s quite a striking exhibition that seeks to address the portrayal of Muslim men in British mass media and to probe the construction of Muslim masculinity in Britain. You can read more about it here—I recommend it highly.

Okay, back soon to food and whisky!

Some reading on street art.