As with most name distilleries these days, Laphroaig offers a large range of tours, with something for every budget and level of interest. You can do the basic tour for £10 (though unlike at Talisker that price gets you three pours of whisky); or if you’re a masochist you can choose to spend 45 minutes cutting peat in the prosaically named “Peat Experience” (£15); if you’re a particularly depraved masochist you can do the “Layers of Laphroaig” tasting (£20) and find out just how it is that they get the Select to taste that bland (yes, I realize that I’m shooting in the head any chance of Laphroaig retweeting the link to this piece to their thousands of followers and thus losing out on PAGEVIEWS). There’s even a food-based tour called the Maltman’s Experience (£30). I would hazard, however, that the two tours that Laphroaig aficionados are likely most drawn to are the Distillers’ Wares (£70) and the Water to Whisky Experience (£100). The latter sounds rather epic (see Michael K.’s account from last year, when it cost £90) but you have to have four and a half hours to give to it. Two is the most I could manage and so it was the Distillers’ Wares for me. There’s yet another option that costs £200. It has the suggestive name of “Behind Closed Doors” and presumably involves washbacks that have been repurposed as hot tubs and the distillery manager as you’ve never seen him before.

The Distillers’ Wares is basically the Water to Whisky Experience without manual labour involved. The first hour involves an in-depth tour of the distillery, stopping at every step of the production process (this is presumably identical to the basic £10 tour). As Laphroaig is one of the few remaining distilleries that still has floor maltings, you actually get to look at every step of the production. And unlike at Talisker there is nothing mechanical or perfunctory about any of it. Our excellent guide went over everything in detail, asked leading questions to make sure we were engaged (not a generic, “are there any questions?”), pointed us towards things we might have missed, and yes, encouraged us to take photographs. Whereas at Talisker (and other Diageo distilleries) photography is prohibited in production areas, our guide at Laphroaig offered to take pictures of us in front of stills and got us pretty close to everything. She also chatted freely about life on Islay and shared anecdotes that made the island come alive a little more.

I’m not going to go into the details of the production process. This may come as a surprise, seeing as I’m an idiot whisky blogger, but I’m not terribly interested in the ins and outs of whisky production. I wanted to tour the distilleries I did because these distilleries produce some of my favourite whiskies; not because I’m fascinated by the shapes of their stills or the particular ways in which they tweak a generally standard process or however else it is they produce some of my favourite whiskies. As I said, useful information (if you consider it such) you can get anywhere; you come to me for, well, I don’t know why you come to me, except that I have lots of unnecessary pictures. See below for some of these unnecessary pictures from the tour portion and then scroll down for the description of the warehouse portion which takes up the second hour or so of the Distillers’ Wares experience. 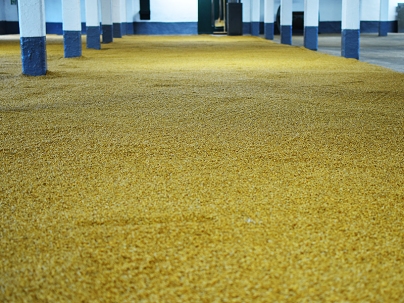 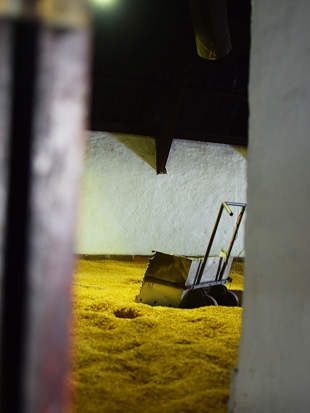 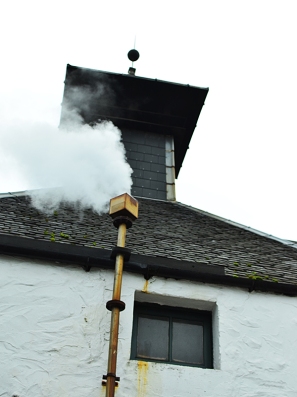 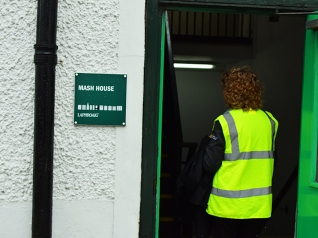 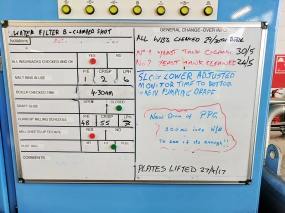 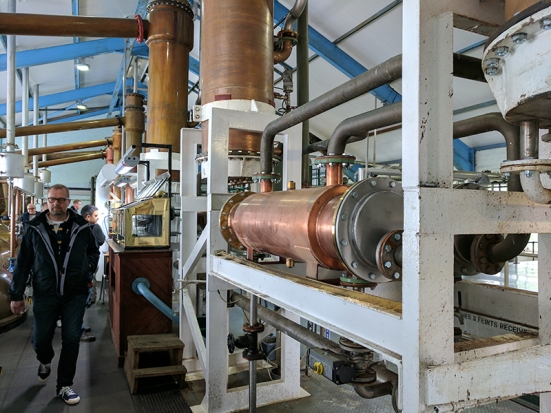 After you leave the still house you go take a look at the peat store (a large shed where the peat is stored, I don’t know what you were expecting it would be). And then it’s on to the No. 1 Warehouse, opposite the visitor centre, where you get down to some serious cask-related bidness. You gape at the casks in the warehouse for a bit (from behind bars; you don’t get to go in and stroke them) and then it’s on to the warehouse tasting. There are three casks laid out. On my visit these were two ex-bourbon cask 15 yo’s from 2002 and a cask strength 12 yo quarter cask (8 years in bourbon casks and then 4 years in a quarter cask). Our guide handed out the Laphroaig nosing glasses that are included in the price and in succession poured us about 15 ml from each cask, maybe a bit more. Those who were driving got little sample bottles to take away.

We discussed the whiskies a bit with each other and her and then we each chose the cask we liked best and used a valinch to fill the provided 250 ml bottle with our favourite. Unlike at the Lagavulin Warehouse Experience, we didn’t have to suck the whisky out through the valinch, just let it settle in it and cap the top with our thumbs. I chose the second of the two 15 yo’s, which was right in my ex-bourbon, fruity Laphroaig sweet spot (not quite as fruity as this beauty but close). After we filled our bottles we filled out the ledger, wrote out our labels and stuck them on. Our guide gave us a box in which to store the bottle and glass for a safe journey home. It wasn’t the joyous depravity of the Lagavulin Warehouse Experience but it was pretty good.

Was it worth £70 though? Look at the pictures and scroll down for my tentative answer.

Please construct your own “butts on butts” jokes.

As I said, we weren’t actually allowed into the warehouse proper. 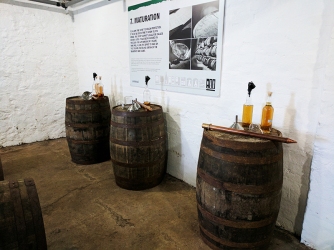 Nice but a little anonymous

This one was fruitier

This was too oaky/spicy for me. 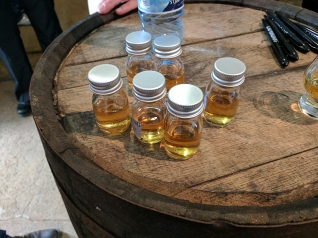 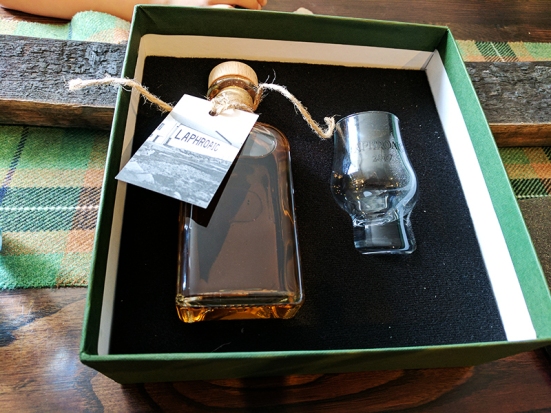 Okay, now we come to the messy question of value. I raise it because £70 is not a small sum: you could buy some pretty good whisky for £70. One way to figure it is to separate out the cost of the tour. Assuming that the one hour we spent on the tour of the production facilities is identical to the one hour on the basic £10 tour, that suggests the warehouse hour is £60. (It also suggests that on the Water to Whisky Experience you pay £40 for three and a half hours outside the distillery and £60 for the hour in the warehouse.) What do you get for this £60? In concrete terms you get small pours of three cask strength whiskies and you get to hand bottle 250 ml of your favourite and take it away in a nice presentation box as a keepsake. It probably works out to a somewhat expensive three pours and 250 ml bottle of whisky but in the abstract I’d say it’s probably worth it.

However, if you compare it to the Lagavulin Warehouse Experience it becomes a little more complicated. There I paid £23 for an hour in a warehouse and got to taste 6 casks. I didn’t get to take 250 ml of whisky away but was poured a lot more than 45 ml and got to taste large amounts of 19 and 24 yo sherry casks and even more of a 35 yo cask. And as nice and entertaining as our guide at Laphroaig was, it’s hard to top Pinkie McArthur when it comes to a warehouse experience. Accordingly, I’d suggest that if you are not a Laphroaig fanatic, and not hellbent on spending a lot of money, the best value may come from doing the basic production tour at Laphroaig and the Warehouse Experience at Lagavulin. You’ll only be out £33 and will get a lot more bang for your buck. Then again, all bets are off if your Lagavulin Warehouse Experience is with anybody other than Pinkie: in that case those pours may be more parsimonious and the extra-whisky component not as entertaining (or they may not, I don’t know).

For myself, as a Laphroaig fanatic, I was very pleased with all aspects of the Distillers’ Wares experience. Going to Laphroaig was an emotional thing for me. I’m not sure if I’ll have a chance to go back to Islay and I’m so very glad that my favourite distillery showed me such a good time.

Next week from Islay: quick stops at Caol Ila and Bunnahabhain; no tours, no warehouses, but pictures of visitor centres! How can you resist?