We only spent one full day on Skye—a fact that I sorely regret. But it was a very good day. We spent the morning at the so-called Fairy Glens up near Uig. Their location is a bit hard to get a fix on but and the last bit of the drive, on a very hilly one-track road with quite a bit of traffic, is not fun, but this was one of our favourite outings in Scotland. And we lucked into a bright sunny morning to boot. We decided to eat lunch in Portree before heading to Dunvegan Castle in the afternoon and it began to rain as we made our way there. We parked in the central square in Portree. None of the parking machines seemed to be working but everyone seemed to be parking anyway and we took a chance (and happily didn’t get a ticket). As the rain was picking up we went into the first restaurant that caught our eye, Cuchullin. And we didn’t regret it. Here is a quick report on our lunch followed by a quick plug for the b&b we stayed at in Broadford, Hillview, and especially their breakfasts.

Cuchullin is a nice, bright space. There are two dining rooms; the tables in one seem a little more spread out than in the other. We were in the busier room (we had about a 10 minute wait before getting a table). Their focus is on seafood—as is the case at pretty much every place on Skye, probably—and that is what we ate. We’d had a big breakfast at the b&b that morning (see below) and so we weren’t terribly hungry. They do also have a few local ales on offer but as I was driving I did not partake.

The boys split an order of fish and chips: the haddock was fried very nicely, probably the best fish in any of the fish and chips we ate in the UK and the chips, unconventionally, were pan-roasted rather than deep-fried. The missus and I shared an order of steamed Skye mussels and crab and basil linguine. The mussels were very good indeed but suffered a bit by comparison with the superlative mussels at Creelers the night before. The linguine was a bit under-seasoned but with salt added was very nice. Still, on reflection, we regretted not getting a seafood platter instead. My eye was also drawn to the black pudding with scallops but I’d already eaten a lot of black pudding at breakfast (again, see below).

Service was a bit slow but it was perfectly friendly. We got out for less than £50, which was also a good thing.

Here are pictures of the restaurant and the meal. Please scroll down for a plug for Hillview. 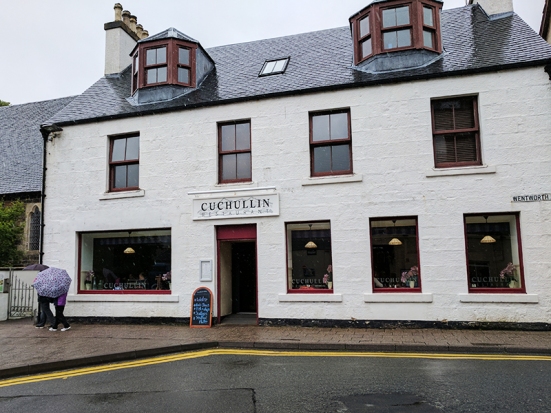 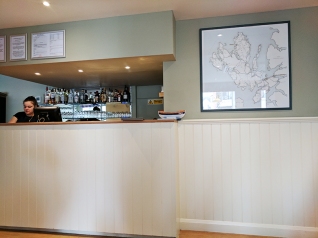 You enter in front of the bar. 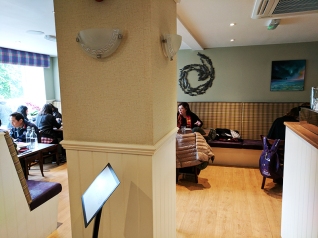 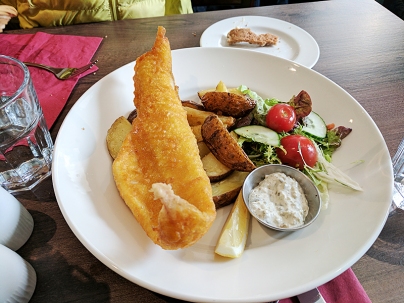 Nothing to do with lunch and we didn’t stay here; I just liked the bright colours.

So, a quick plug for our b&b, Hillview in Broadford. You can’t book it from the big travel sites (also true of the very nice b&b we stayed at on Islay—more on that later); I came to it from this site. We needed a place that could give us a family room. Unlike the Loch Ness Inn in Drumnadrochit, they didn’t have two separate but connected rooms with an en suite bathroom but the room was a lot bigger and nicer than the family suite at the Loch Ness Inn, and the bathroom was much bigger and nicer as well (with both a tub and a shower). The room has a nice balcony with views of Broadford Bay and it’s also the only room on the first floor—which means that even though the bathroom is outside the room it is effectively a private bathroom. Even though they were full up both nights, we didn’t actually encounter the other guests and barely heard them. The house itself is very nice, and has a large parking lot. And being at the top of a residential hill in Blackpark in Broadford there’s no sounds of traffic etc. And they have pretty good wifi—which was very nice after the Drumnadrochit disaster.

Booking is done over email, by the way, and on the honour system, more or less. They tell you they have a room for your dates, you tell them you want it and that’s it. You pay no deposit and you pay by cash when you leave. We showed up earlier than they were expecting—before lunch rather than after—but they were kind enough to let us drop our luggage off in the room and freshen up before heading out towards the Oyster Shed and Talisker. While a number of TripAdvisor reviews note otherwise, we found the proprietors to not be as chatty as can often be the case. Other than at check-in I don’t think we had a conversation with either of them that was more than three sentences deep at either end. To be clear, I found this to be a plus. Forced bonhomie is the second major reason I refuse to stay at b&b’s in the US (too many fucking pillows on beds is the first major reason).

A nice location, hosts who weren’t overbearing, a large, clean and attractive room, a well-appointed, private bathroom: what more could you ask? Well, the breakfasts were great! You get a choice of things for each person—you write these choices down on a piece of paper and leave it on the hallway table on the previous night, nothing the time you’d like to eat; and when you come down it shows up, freshly cooked. And it also shows up perfectly cooked. We had the best black pudding here that we had over our three months in the UK (no surprise, when I asked, it turned out to be Stornoway black pudding); also great were the kippers and the perfectly poached eggs. The breakfasts were so good that I would even put up with forced bonhomie to eat them again. 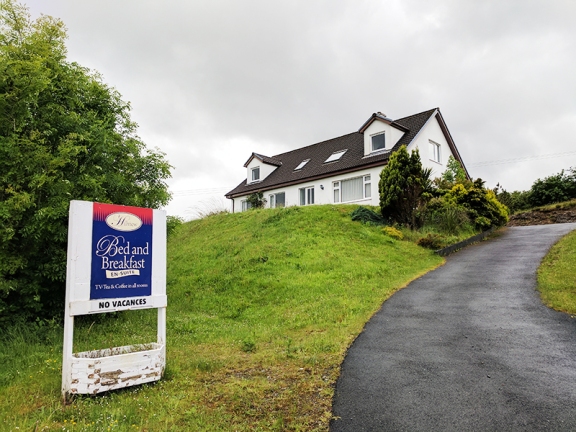 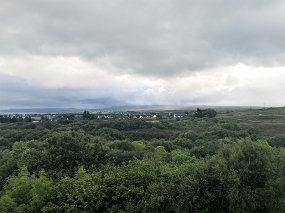 Yes, it’s completely different with fried eggs instead of poached. 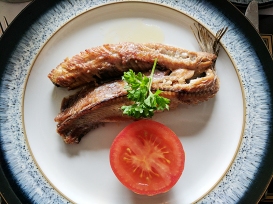 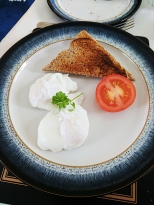 Poached eggs by themselves are pretty good too.

Lots of extra toast to mop the eggs up with. 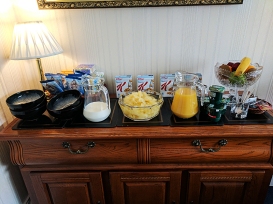 Okay, tomorrow we jump forward in time a bit to the first Islay food report: from the Old Kiln Cafe at Ardbeg. Next week I’ll have my last restaurant report from Skye. A nice seafood meal in Oban after that and then we’ll be on Islay for a few reports.