Here is my long-threatened post on books. I’ve written various versions of it over the last few months, junking each one. What I’d originally planned was a long post on contemporary South Asian fiction—taking in its history and development, surveying the scene in various languages, commenting on national and global market forces and international acclaim for a handful of writers, and ending with some recommendations of books by lesser-known writers. But each time I’d start to write it, it would begin to balloon in my head into something more suited for academic readers and I’d balk at basically bringing my work life into the blog (which is where I come to do do things I don’t do at work). And so, I’ve decided to instead break that proposed survey into an occasional series of posts highlighting (books by) South Asian authors and authors of South Asian origin that I think deserve more attention than they get.

This does not mean that I will be writing (only) about relatively obscure or hard-to-find authors—though there will be some of that. In fact, the author I am beginning with is someone who is reasonably well-known outside India and each of whose books for the last couple of decades have been published by major American houses: Amitav Ghosh.

Now, when it comes to writers like Ghosh, this series of posts is not going to give you a lot information on the writers’ lives or book reviews per se. The former you can find on Wikipedia and the latter I am too lazy to write (I’m certainly not re-reading the books for these posts). All I’m going to be doing here is suggesting some titles that people interested in reading South Asian fiction might want to pick up. In the case of Ghosh, I am going to restrict myself here to recommending his second, third and fourth books.

But, wait: some of you probably do need a bit of an introduction to Ghosh. 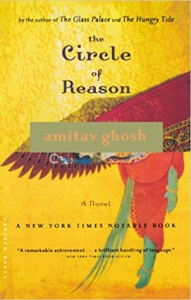 His career as a writer began in the mid-1980s. Like a number of Indian writers whose careers were launched then, this was very much a post-Midnight’s Children phenomenon. Rushdie’s Booker Prize-winning second book essentially created Indian fiction in English as a publishing category. Indian fiction in English had, of course, been around since the mid-1800s but there were very few writers before Rushdie that publishers and readers outside India knew or cared about—and even in India they were relatively marginal figures compared to their major contemporaries in other language traditions. The huge success of Midnight’s Children changed all that and a number of British publishing houses began doing business in India—most prominently Penguin; all in search of the next Rushdie. It wouldn’t be till 1996 and The God of Small Things that the next Super Big Book would arrive but along the way a large number of writers got their start and sold a lot of books and won a bunch of awards. Ghosh was one of the first of them.

His first novel was The Circle of Reason (1986). I’m not recommending it because it’s not so very good. It’s the only one of his books that reads like the author was aware that his publisher was looking for the next Rushdie. It’s not bad but it’s nothing a non-completist needs to read. However, his next three books were not only great, they were each very different from each other (and nothing at all like anything Rushdie or any of Ghosh’s other South Asian contemporaries were doing) and it’s these that I want to draw your attention to. Let’s take them chronologically.

The Shadow Lines (1988) moves across time and space in a manner that would be dizzying if it weren’t presented so naturally. The timelines switch between the 1940s, the 1960s and the 1970s and the geography takes in London, Calcutta and Dhaka. In both series of shifts, the former evoking the working of memory, Ghosh illustrates connections and stories that bind people, in love or more uneasily, across predictable boundaries. It’s not a straightforward book but it’s a very pleasurable read. You become aware of a mystery, an absence at its center that will not be revealed fully till the end and you will want to keep reading till the end. The ending, unfortunately, will likely prove unsatisfying but you won’t regret having read the book. You’ll also get a sense of how Ghosh’s training as an anthropologist informs his vocation as a writer. Despite finding the ending unsatisfying, this is a book I feel a great emotional connection to and I know this is true of a lot of my Indian friends, especially those of us who came of age in the pre-globalization era. It is also a novel that evokes the texture of life in Calcutta without either pandering to the needs of those who do not know the city well or shutting them out.

His next book both draws even more directly on his anthropologist self and displays it more directly. In an Antique Land (1992) is a hybrid of a kind that was not very common at the time of its publication. It is in part a non-fiction account of Ghosh’s time doing field work in Egypt; added seamlessly to this is a fictionalized recreation of the life of a 12th century Egyptian slave sent to represent his master’s interests in South India that Ghosh extrapolates from actual documents he found during his field work. Published during the first Gulf War and also at the time of the rise of Hindu fundamentalism in India, In an Antique Land speaks powerfully and movingly to the long connections between seemingly disparate worlds and times. If I had to recommend one book by Ghosh, it would be this one.

That said, my actual favourite Ghosh book may be the next one: The Calcutta Chromosome (1995). No one who’d read The Shadow Lines when it came out would have expected In an Antique Land, and no one who’d read In an Antique Land when it first came out would have expected The Calcutta Chromosome. In terms of genre it’s a science-fiction novel—and indeed it won the Arthur C. Clarke award—but it really is about the same things that the previous two books were about: the surreptitious ways in which lives and histories connect across and against official boundaries. The book proposes a counter-history of the discovery of the malaria parasite by Ronald Ross (a real figure—and Nobel Prize winner—who appears in the books) and also a counter-science, an understanding of which is fundamental to the book’s own structure and which requires that the book be read at least twice (this you will have no problem doing: it’s a propulsive page-turner). I can’t say anything more about it because it would ruin it. This is the Ghosh book that I teach most often and it blows the mind of even the most resistant student.

Ghosh’s career since The Calcutta Chromosome has remained on a more even keel, generically speaking. Starting with The Glass Palace and through the recently concluded “Ibis Trilogy” (Sea of Poppies, River of Smoke, and Flood of Fire) he’s been on a bit of a historical fiction tear. They’re all big books (in terms of poundage) and the narration is a lot more straightforward in all of them. They are also all part of his project of bringing stories of people and movement and migration that have been left out of the grand narratives of the last 200 years to a broader readership. They’re big and capacious books, also worthy of your attention (and the trilogy is absolutely mini-series adaptation-ready). You may also enjoy his other non-fiction work, most recently his book on climate change, The Great Derangement (2016).

Despite his beginnings, Ghosh is in many ways the anti-Rushdie: he’s an altogether more reserved figure and writer; he’s also one of the few English language Indian writers whose careers were launched in the wake of Rushdie’s who has built up a body of work that could stand up to Rushdie’s. If you haven’t already, go read him.

[Note: the Amazon links above are all affiliate links, meaning I will make a few pennies towards the upkeep of the blog if you purchase any of these books from these links.]