Here is only my second review of an Ethiopian restaurant in the Twin Cities. I reviewed Fasika last fall and had planned to get to more Ethiopian places before the year ended. Alas, as with most of my well-intentioned plans—okay, all of them—I didn’t stick to it. And so my review of Demera comes 3-4 months after I’d thought it would. It is also located on University Avenue in St. Paul, a mile or two away from Fasika. It doesn’t have the reputation or name-recognition of Fasika—and it’s not easy to spot or easy on the eyes from the outside—but based on our recent dinner, I might say the food is better here.

Demera, by the way, also does not have a website. As such, if nothing else, my pictures of their menu may be a rare useful thing in one of my reviews. Not that there are any surprises there. Ethiopian restaurants in the Twin Cities—like their Somali counterparts—pretty much have a standard menu and if you haven’t been to Demera you can expect to find there a slightly more compact version of what’s on offer at places like Fasika.

But first you have to get to the restaurant. They’re located at 823 University Ave. but the signage is inconspicuous. Keep your eyes peeled for a large red building with a small parking lot alongside. The sign in the parking lot says they’re open during construction (of what is not clear) and nothing on the outside would raise your hopes for what’s inside. However, when you go in you’ll see that it’s a cosy and attractive space, done up nicely with Ethiopian art on the walls and so forth. There’s a large’ish dining room as you enter, a bar at the end of it and a few more tables alongside.

We were a mid-size group: six adults plus our boys. We ate a fairly representative cross-section of their menu. As we ordered a fair bit, we asked that they not send out things as they normally would: i.e on large platters with the meat dishes atop injera; there simply would not have been enough room on the table for that. Instead, we asked if they could serve the injera and the entrees separately and they were happy to oblige. In addition to making the table manageable, this also made it easier for everyone to share. What did we eat?

For pictures of the food and the space, launch the slideshow below. Scroll down for price, value, service etc. 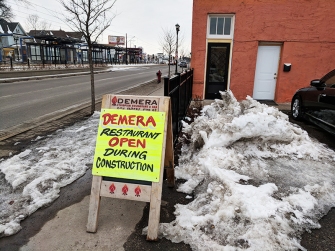 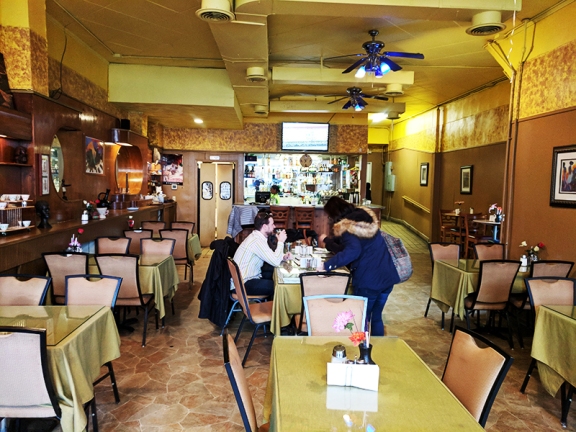 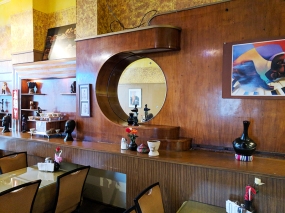 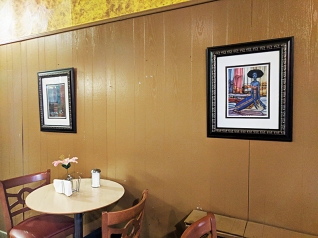 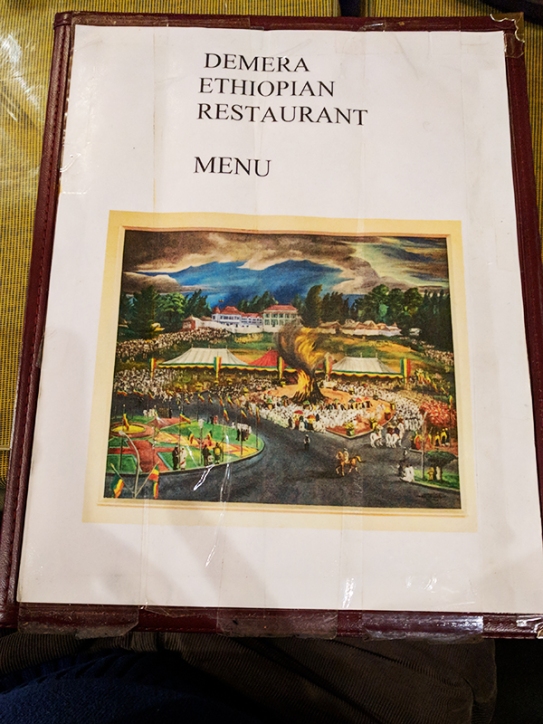 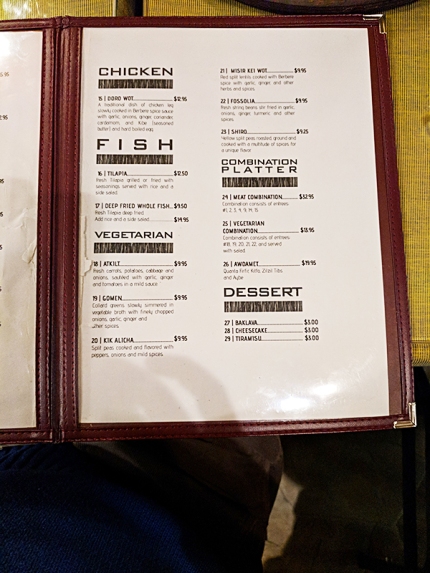 They gave us a large platter of the salad that would normally have come with every dish. 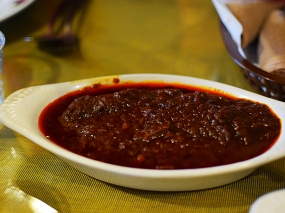 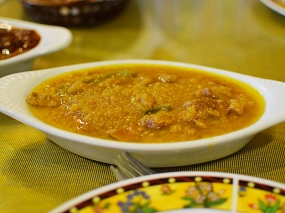 All of the above came to about $22/head with tax and tip (counting our boys as one adult eater). Which is very good value for the quality of the meal. Service was warm and attentive. We ate early and so there weren’t a lot of people there, but by the time we were leaving there was every sign of their filling up.

As I said, I thought the food here was better than at Fasika—in particular the key wot and the doro wot. This is not to put Fasika down—their food is very good too. In fact, I am developing a theory that the baseline quality of Ethiopian food in the Twin Cities may be higher than that of any other recent-immigrant cuisines. Of course, this must be put to the test more rigorously. Our next Ethiopian meal will likely be across the street from Fasika at Ghebre’s (well, I guess they’re Ethiopian/Eritrean). Where else should we be looking to go? Please make recommendations. And, oh yes, many thanks to long-time commenter, Joe Allen for recommending Demera!

Next up from the Twin Cities food world, a somewhat disappointing Sichuan meal.