Our day began in Dornoch. We’d spent the night at the Dornoch Castle Hotel. In the morning I’d enjoyed a micro-tour of their micro-distillery (report coming soon) and after checking out we spent an enjoyable hour or so at the small but charming Dornoch Historylinks Museum located right behind the hotel (I recommend it highly if you visit Dornoch, especially with kids). We then headed north. Our final destination for the day was Orkney but our ferry wasn’t till the evening. We were taking the NorthLink ferry from Scrabster to Stromness. They sail three times a day and there was no way on earth we were ever going to make it to the 8.45 am departure. The next departure is at 1.15 pm, which would mean we’d need to check in by 12. That too would have meant a hurried departure from Dornoch plus rushed lunch along the way. So we decided to take the evening ferry at 7 pm. This meant we could have a leisurely day along the coast and it also allowed for some distillery stops. The first stop was at Clynelish and the second was at Pulteney in Wick.

The drive from Dornoch up to Wick is very nice. It’s mostly along the coast and it’s very cool to see the landscape change as you go further north. Traffic wasn’t too bad and the drive is generally not of the hair-raising kind. Wick itself is not going to be in the running anytime soon for the “Most Attractive Town in Scotland” prize, should any such exist. It has certainly seen better days and the decline of the local fishing industry can seemingly still be felt in the town. We were there on a Tuesday afternoon and the town was deserted. We parked at the Wick Heritage Museum—where the missus and the kids spent some time while I toured Pulteney—and on my walk from there to the distillery I saw maybe three people on the streets. Now I grant that I did not see very much of the town, but what I saw had a very dour feel. I’m happy to say, however, that the experience at Pulteney is anything but dour. In fact, I will say that of the not-very-many distillery tours I’ve done this was the best.

Things started out nicely in the shop where I chatted with the staff member who had taken my tour reservation over email. She was very friendly and remembered me from our correspondence (granted I have an unusual name). I inquired about the fill-your-own casks and she poured me generous samples from the two pre-filled bottles they have in the shop. She then walked away from me to help other visitors, leaving the bottles—including a 20 yo—in my care. Her warmth and trust set the tone for the tour that followed. For the tour you go from the shop to the visitor centre proper. (All of these spaces, by the way, turn out to be far more expansive and attractive than you might expect when standing on the street.) There are a lot of displays on Pulteney’s history, and a lot of playing up of their maritime connections—as you may know, this is a major part of Pulteney’s branding—but it does not in any way approach theme park’ish levels of cheese. The visitor centre is where the fill-your-own casks are located (I did not fill a bottle of either cask on offer), and it’s also where the tours depart. There are some large tables there as well, and I’m not sure what those are for—the tasting portion of the tour takes place in another large lounge.

We were a mid-sized group and we left promptly with our excellent guide, Dawn. Dawn was extremely knowledgeable and also extremely drily funny. This was a significant part of what made the tour so good but it also helps that Pulteney do not engage in Diageo and Chivas-style control-freakery. Photography is allowed everywhere and you can get as close as you like to the equipment (just as at Laphroaig). There was also no marketing flim-flam involved. As to whether all of this is true of all Inver House distilleries, I do not know. Dawn talked about the distillery, the town, the surrounding area and we got a feel for what the distillery represents beyond its whisky.

The tour also included elements I’d not encountered on the others I’ve done so far. For one thing, Pulteney is one of the few distilleries that has worm tubs as condensers and we got to go right up next to them. The tour also takes you to their filling shed, where I got to have a small taste of their new make. Finally, all of Pulteney’s malt-bound spirit is matured on site and they have both dunnage and modern rack-style warehouses, and you get to go to both. Unlike at many distilleries, going into the warehouses here does not mean standing behind glass walls: we were right in there. At no point in the tour did it feel like we were in a rush; indeed, at a few points I almost wished that Dawn would be a little less tolerant of some of the group members’ propensity for long-winded questions. Then again her generosity was part of what made the tour so good.

After the visit to the warehouses the tour comes back in and heads into a large but cosy lounge where the tasting portion happens. As I was driving, and as I had to catch up with the family, I grabbed my tasting portions in sample bottles and hurried out. It would have been nice to stay for the whole thing and I am bummed I missed it.

See the massive slideshow below to get some inadequate sense of all of this. If you make it to the end, scroll down for a few more thoughts and to see what’s coming next.

On the steps up from the museum area. Anyone know what this refers to? 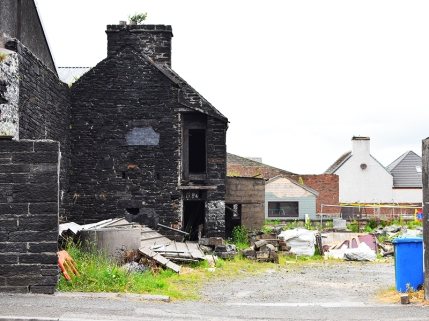 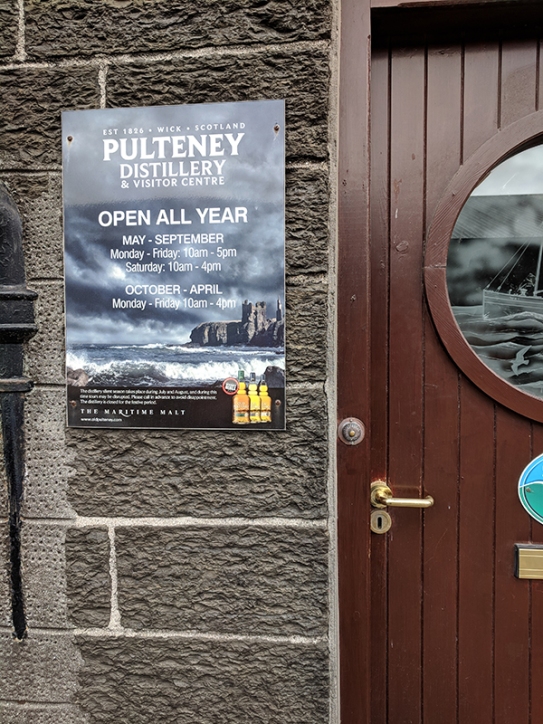 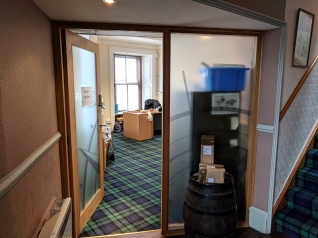 Love this table, wish I had one. 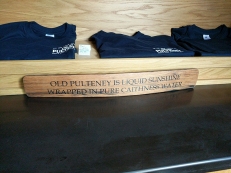 This was too woody for my taste. 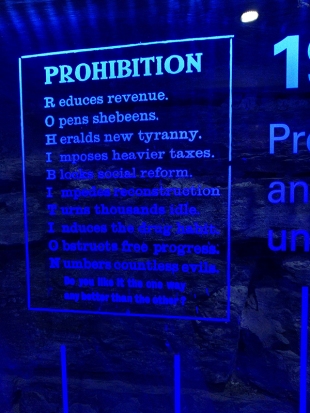 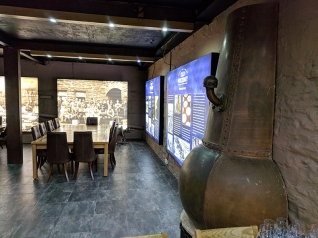 Though it’s been overhauled since.

Alas, I did not add my name 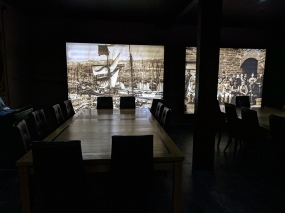 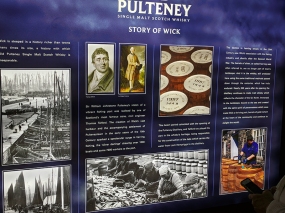 Empty casks outside the still house.

If I recall correctly, there were warehouses up her in the past, whose doors can still be seen.

You have to feel sad for any distilleries that don’t have one of these. How do they show their faces in public? 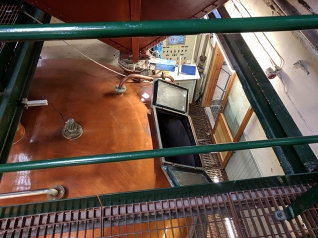 I believe these were brightly coloured at some point; just steel now. 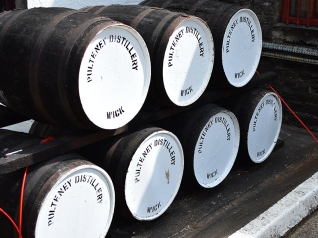 These are outside in case you forget where you are. 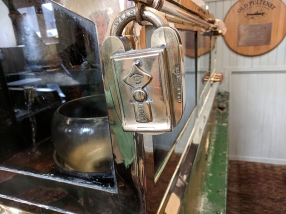 I’d warrant distillery tour guides would pay to have these locks removed if only so as to avoid inane questions of the “who has the key?” variety. 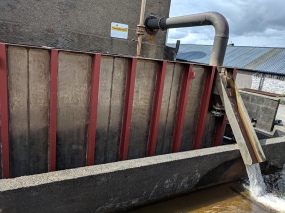 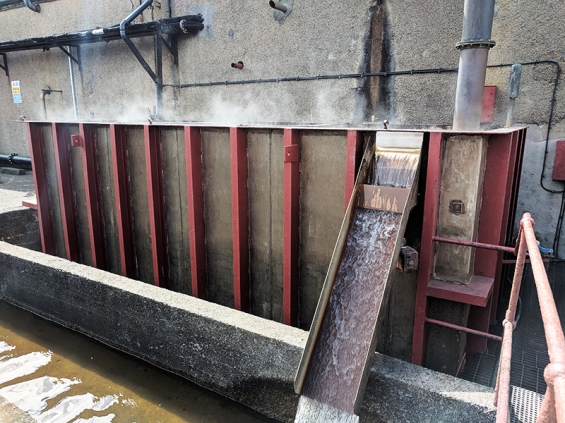 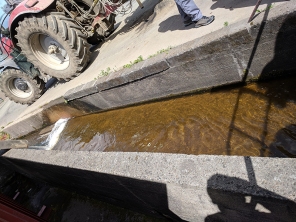 Presumably on its way to farms. 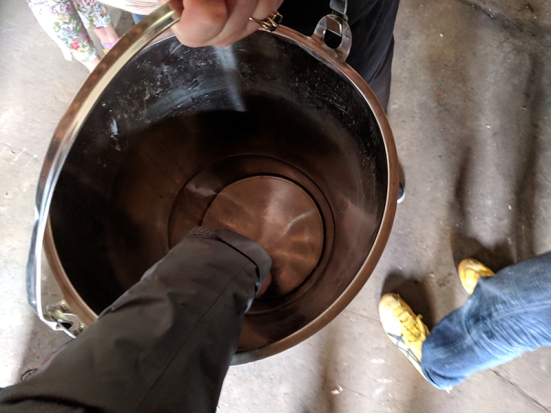 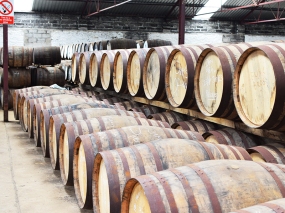 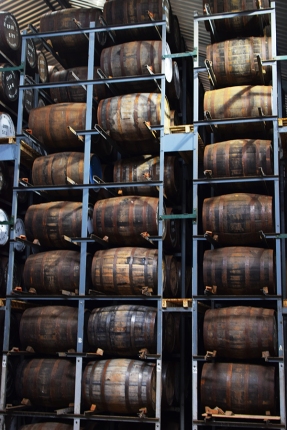 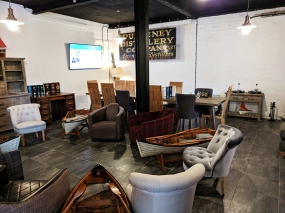 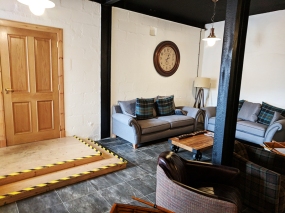 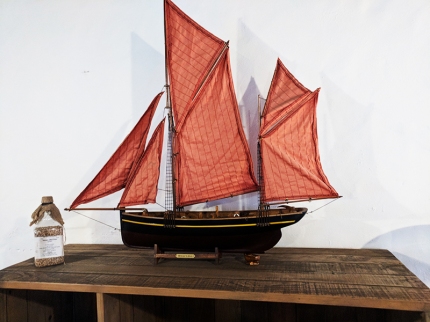 The family enjoyed their time at the museum as well but this was the first of three instances that week of museums in small northern Scottish towns being billed on travel sites as being far more expansive than they turned out to be. On TripAdvisor and elsewhere we’d got the sense that you could spend hours on end at the museum in Wick but this did not prove to be the case: they were done in less than an hour and waiting for me in the car (on account of the dour, deserted feel of the streets of Wick, which did not invite exploration). This experience would be repeated twice on Orkney, but more on that later.

We then tried to see if it would be possible to eat an early dinner in Wick before heading to Scrabster and the ferry, but nothing was open. Accordingly we headed off to Thurso. On the way to the ferry later we passed Wolfburn along the way—the new distillery that has usurped Pulteney’s position as the most northerly distillery on the mainland. Maybe someday I’ll get to visit Wolfburn as well but I rather doubt it. I am certainly very glad I got to visit Pulteney, however, and I strongly urge any of you who are going to Scotland with an interest in whisky to think about visiting them, even if you are not going on to Orkney as we were. If you are based in Inverness you can make a nice whisky day trip out of it. And Dunrobin Castle also sits right outside Dornoch if you are that way inclined.

Up next from Scotland, a much briefer stop at Scapa. But before that there will be more whisky reviews and I really should get started on my food reports from this trip as well.