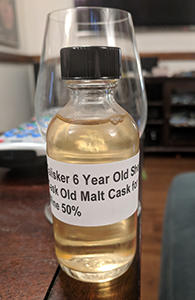 About four and a half years ago K&L released a 5 yo Talisker—the so-called “Speakeasy”, bottled by Douglas Laing. It had a cool label design and the whisky inside was pretty decent, if nothing very special. A couple of years ago they released another young Talisker bottled by Douglas Laing, this one, from a sherry cask. It cost about $40 and I was sorely tempted to get one. Especially as in their tasting notes they said things like, “It’s loaded with equal parts salt, smoke, fruit, and sweet malt character with a spray of sea water on the finish”. But then I remembered that K&L’s tasting notes are mostly random word soups designed to make people want to buy whiskies and that if they match up with what’s in the bottle it is entirely by accident. Sometime later I had an opportunity to get a sample from a bottle split, and with a much lower financial risk at stake I gave it a go. Will I regret my skepticism and wish I’d bought a bottle? Let’s see.

Nose: Rubber cement and porridge and yeast; quite new makey. No positive change with time; let’s see what water does. Well it makes it more mezcal-like but I can’t say it makes it better.

Palate: Smokier here (ashy) and a bit sweeter to start. On the second sip the off notes from the nose show up and then it gets more plasticky with every sip. With more time there’s a faint hit of cooking sherry that separates from the whisky. Less plasticky and more salty with water.

Finish: Medium. All the stuff from the nose and palate and then a lot of salt at the end. With water that cooking sherry note lingers into the finish.

Comments: Well, I am very glad I do not have more than 60 ml of this; in fact, I couldn’t even bring myself to drink more than 30 ml—I’ll pass the rest on to noted masochist, Michael K. It’s amazing that people continue to take K&L’s marketing nonsense seriously after releases like this one. It’s not undrinkable (though it needs water to clear that bar clearly) but I can see no reason for bottling something like this except that you can get people to shell out cash for indie Talisker—especially when it’s billed as a sherry cask. $40 may have seemed like a good price but it’s about $25 too much for what this is.