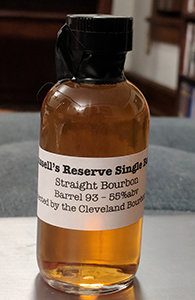 Nose: Quintessential bourbon nose: caramel corn, charred oak and just a bit of a herbal rye kick. As it sits a mix of dried orange peel and leather develops in the background. With a bit of air there’s a leafy note and also a cereal note. A splash of water brightens it up and pulls out more rye (cold black tea)

Palate: The same stuff as from the nose but it’s brighter with more of the orange peel. Very balanced and very drinkable at full strength. Gets spicier with time with some cinnamon and clove joining the oaky bite. Water pushes back the oak and spice and pulls out more of the fruit and also some cocoa.

Finish: Medium. No new development here. With time there’s more sweetness at the end along with the oaky and leafy notes. Longer with water and fruitier here too.

Comments: This is very nice indeed. And there’s a clear through line from the 101 proof rye to this. Hmmm, I’m beginning to wonder why I don’t drink more bourbon and rye…A good selection by the club! I liked it better with water but I know that is not the way of the bourbon maven: I am sorry [I am not].

Thanks to Michael for the sample!